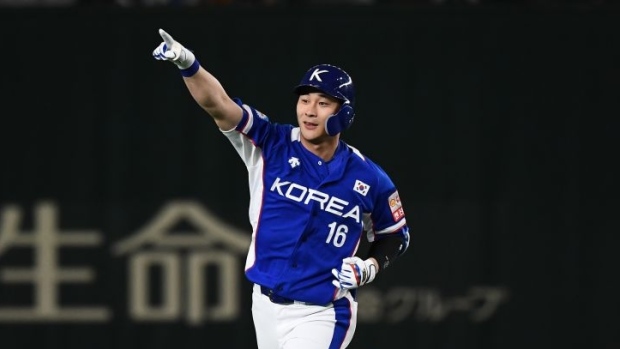 There’s certainly a level of interest in Ha-seong Kim from #BlueJays side but hard to say if he’s a top target or a contingency.
From a fit perspective, he’s perfect.
It starts with his age: 25.
The SS/3B/2B versatility gives him a utility floor but the upside is the allure.

However, Mitchell wonders if the 25-year-old is a "top target" for Toronto or a contingency plan in case they can't sign players on the top of their list.

Kim has spent his entire seven-year pro career in the Korean Baseball Organization and had a career season in 2020 with the Kiwoom Heroes in Seoul, hitting .306 with 30 home runs and 109 RBIs over 138 games. He also had an on-base percentage of .397 and a .523 slugging percentage. Kim, who can play second base, third base and shortstop, has a career .294 average with 133 homers and 575 RBIs over 891 games in Korea.

It also appears, Blue Jays ace Hyun-jin Ryu recently had dinner with Kim, saying he'd be “happy to play on a same team with Kim.”

MLB teams have the ability to sign Kim until Jan. 1.

Hyun-jin Ryu recently met and had dinner w/ Ha-seong Kim who is being posted at this time. In an interview w/ KBS, Ryu said it he would be “happy to play on a same team w/ Kim.” Kim’s posting is scheduled to last until Jan 1. #BlueJays #MLB #KBO pic.twitter.com/r9jSdzEr9W