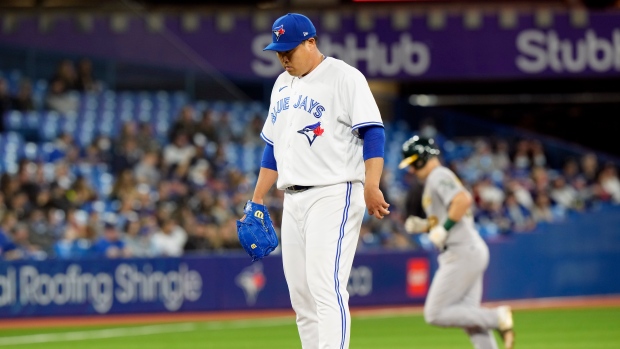 An MRI on the arm of Toronto Blue Jays start Hyun Jin Ryu revealed a forearm strain and elbow inflammation, the team announced on Friday.

The 35-year-old lefty is expected to miss multiple weeks with his latest injury.

He’ll be down for multiple weeks. The #BlueJays are still evaluating and consulting with additional doctors at this point.

The team is still consulting with additional doctors in regards to next steps with Ryu. Ross Stripling will step into the rotation for the time being.

The team had previously placed the Incheon, South Korea native on the 15-day injured list on Thursday following an early exit from Wednesday's start against the Chicago White Sox in which he left after only four innings of work. It's the fourth trip to the IL and second in 2022 for Ryu in his two-plus seasons with the Jays after signing a four-year, $80 million deal ahead of the 2020 season.

The Jays (30-20) are winners of eight straight games and open a three-game set with the Minnesota Twins (30-23) on Friday night at the Rogers Centre.