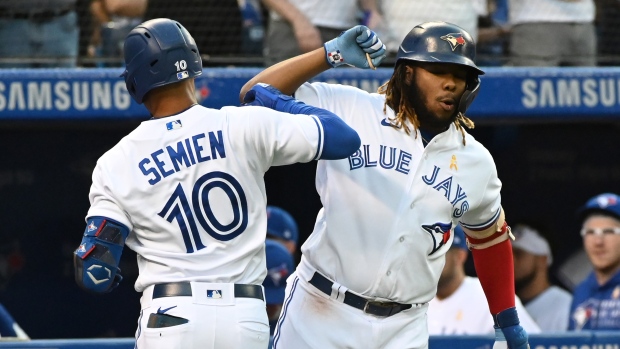 A Toronto Blue Jays trio is up for hardware at the 2021 Players Choice Awards.

The MLBPA announced on Monday that first baseman Vladimir Guerrero Jr. was one of three finalists for the Player of the Year Award, while second baseman Marcus Semien is a finalist for the Marvin Miller Man of the Year Award and starter Robbie Ray will also vie for the American League Outstanding Pitcher Award.

The winners will be revealed on the 6pm et edition of ESPN SportsCenter on Oct. 28.

Ray, considered the frontrunner for the AL Cy Young Award, is one of the three finalists in his category along with New York Yankees starter Gerrit Cole and Lance Lynn of the Chicago White Sox.

Etobicoke, Ont. native Joey Votto is one of the finalists for the National League Comeback Player of the Year Award.