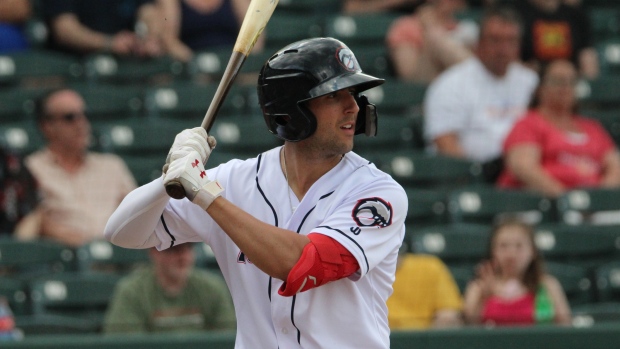 SCOTTSDALE, Ariz. — Not all strikeouts are created equal.

That’s what Toronto Blue Jays prospect Kevin Smith is taking from his down year in 2019, struggles that saw the 23-year-old shortstop whiff in 32.3 per cent of his at-bats in the proving ground that is Double-A New Hampshire.

The past two seasons have been polar opposites for the 2017 fourth-round pick.

The combination of well-rounded tools and impressive production in his first full professional season was enough to land him on Baseball America’s top 100 prospects list, at No. 91, back in January.

But after making some changes last winter in an attempt to build off his breakout campaign, Smith struggled mightily in his first taste of more advanced pitching at Double-A — he’s not the first and won’t be the last to go through that adjustment to the upper minors — and it was all about the swing-and-miss.

“I was looking for any way to get even better,” said Smith, who’s wrapping up a stint in the Arizona Fall League this week. “The one thing that the analytics guys kind of pointed out was that I struggled up in the zone with fastballs, mainly good velocity. The numbers said that I couldn’t do that, so I wanted to change something to make me do it a little bit better and I was like, ‘If I can hit that, I can have an even better year in 2019.’ Obviously, that didn’t work out the way I wanted to.”

Smith’s numbers dropped across the board.

“I just wasn’t putting the swings on the ball that I usually do,” Smith said. “That was kind of the frustrating part. I had the confidence all year that I was going to go out the next day and I was going to find it, so going out there day in and day out and not getting it and struggling and not helping my team as much as I wanted to was definitely tough. It never really wore on me that I was never going to find it or it was never going to get better in the future, but it’s definitely a year I’m going to look at down the line and be thankful I had it when I did, move on from it, and learn from it to make sure it doesn’t happen again.”

The one thing that hasn’t changed is Smith’s outlook on it all.

Despite an Arizona Fall League riddled with more swing-and-miss — Smith has struck out 34 times in just 59 at-bats — the University of Maryland product is confident another winter of analyzing his swing will reveal the fix.

Nothing is off limits for Smith, including traditional methods as well as analytics. He’s open to it all if it makes him a better hitter.

“I feel like you should know as much as you can about your career and what you do, just like any other career or profession, they study as much as they can,” Smith said when asked how much he delves into the analytical world. “I’m big into it as far as trying to figure out what will work for me and what won’t. I try to throw out stuff I don’t like and keep stuff I do like.

“I’ve seen kind of how it affected me this season, so I’m going to try to attack it in a different way going into next year. When you make changes, it’s always a give and take. You’re going to give something to get something. Knowing that and knowing how it affected me this year, I’m going to put together a better plan of how to attack it and get the most out of the three months before I go back down to spring training.”

Trying to gear up to hit the high fastball at 95-plus left him vulnerable in other areas, but the Blue Jays don’t see major swing flaws. Truly, they believe it’s about the selectivity and a better understanding of what pitches he can drive.

Gil Kim, the club’s director of player development, has been watching Smith closely all season long.

“When Kevin is going well, he’s able to recognize the pitches he can drive and he’s able to repeat that,” Kim said. “With some of the strikeouts we’ve seen, some of it has to with his pitch selection and trying to do too much with pitches maybe he shouldn’t.

“To be a good hitter, it requires a sound swing, but also a sound mentality and approach, as well. If any of those things are off, it can make hitting pretty difficult.”

Smith recognizes that, which takes us back to the very first line you read: Not all strikeouts are the same.

“Missing pitches you should hit – that’s the biggest thing,” Smith said. “I think I led the league in foul tips before two strikes this year. I was just missing pitches all year. Obviously, that’s frustrating and it gets in your head like, ‘Man, what am I doing to miss that pitch?’

While the bat is the focus and Smith needs to have a strong 2020 season in order to reposition himself as one of the important pieces in the next wave of prospects arriving behind Vladimir Guerrero Jr., Bo Bichette and Cavan Biggio, the glove has fallen into the category of underrated.

The Blue Jays have given Smith reps at third base and second base over the past two seasons, but they fully believe in his ability to stick at shortstop, the most valuable defensive position on the diamond.

But the Jays seem to have found their cornerstone shortstop, and despite some varying opinions, Bichette will have to fail at the position before the club decides to move him off of it.

Both the numbers and the eye test from Bichette’s 46-game sample size in his big-league debut say that won’t be happening anytime soon.

With that in mind, the Jays sent Smith to the AFL with a mandate to play more hot corner and a little bit of keystone, too.

The shortstop skillset will play at either position, but third base seems to be the fallback.

Smith and Bichette aren’t all that different at their natural positions.

“They’re similarly instinctual shortstops who show reliable hands and have strong arms, as well,” Kim said. “They’re both similar in that they’re not flashy. Bo is probably a more physical, aggressive shortstop, while Kevin is a more calm, controlled shortstop. But Kevin is a shortstop. Since he played for as at Bluefield, that’s been a pretty consistent opinion for us.”

With a reliable glove and a dash of all-important versatility, it all comes back to the bat.

A rebound year in his second crack at the Eastern League in a Fisher Cats uniform will have Smith firmly in the third-baseman-of-the-future conversation, just ahead of 2018 first-round pick Jordan Groshans, who was slowed by a foot injury at Low-A Lansing this season.

The next 12 months could be a turning-point chapter in Smith’s story.

“The 2020 season is going to be a big year for Kevin and we’re hopeful he comes into camp taking everything he’s learned from 2019 into his approach and it is huge,” Kim said. “It is going to be an important year for him.”