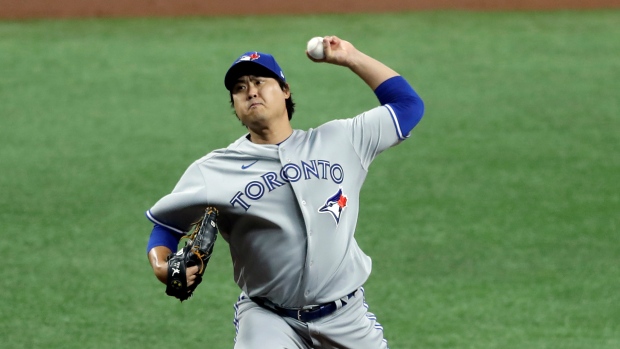 The Toronto Blue Jays will start Matt Shoemaker in Game 1 of their playoff series against the Tampa Bay Rays and push ace Hyun-Jin Ryu to Game 2.

#BlueJays will indeed push Hyun-Jin Ryu to Game 2, giving him an extra day of rest.

This is how pitching matchups will go against Rays.

If the best-of-three series goes to a Game 3, the Jays will send Taijuan Walker to the mound to take on Charlie Morton.

Charlie Montoyo says Ryu did not ask for an extra day, and it’s nothing physical.#BlueJays decision-makers view 3 games as being equal, not placing importance on Ryu being out there for Game 1.

Montoyo: “The goal is to win two. It doesn’t matter when he pitches.”

Jays manager Charlie Montoyo said Ryu did not ask for an extra day's rest and the delayed start is nothing physical. He said the team's decision makers view all three games as being equal, and are not placing importance on Ryu being out there for Game 1.

Hyun-Jin Ryu has been good no matter how much rest he gets this season, but #BlueJays ace has been a touch more dominant with an extra day.

In 12 regular season starts for the Blue Jays this season, Ryu finished with a 5-2 record, 2.69 earned run average, and 72 strikeouts in 67 innings.

Shoemaker meanwhile, made six starts for the Jays this season, finishing with a 0-1 record, 4.71 ERA, and 26 strikeouts in 28.2 innings.