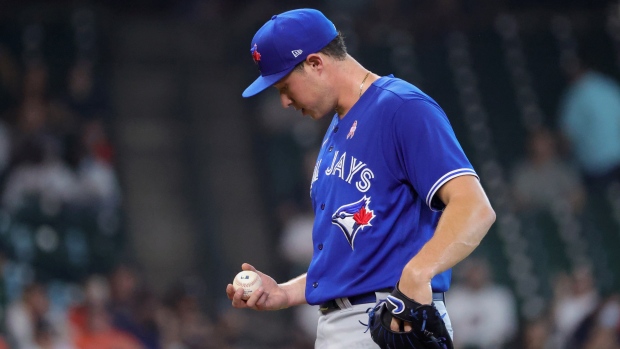 Two days after he struggled mightily in his first big league outing of the season, the Toronto Blue Jays announce they are sending Pearson to triple-A Buffalo.

Toronto is recalling right-hander Jeremy Beasley from AAA in Pearson's place. He will be active for Tuesday's series-opener against the Atlanta Braves.

The 24-year-old Pearson lasted just 2.1 innings Sunday against the Houston Astros, walking five and surrendering three earned runs while striking out no one. In seven appearances over the course of his brief MLB career, Pearson's ERA now sits at 6.64.

He made his season debut last week pitching for the Bisons, who are playing out of Trenton, N.J., because of COVID-19. He struck out eight hitters while allowing one run in 3.2 innings of work.

Pearson was limited to just one inning in spring training due to a groin injury. He pitched in five games with the Blue Jays during the 2020 season and recorded an ERA of 6.00 in 18.0 innings.

Meanwhile, Charlie Montoyo told reporters Tuesday that left-hander Anthony Kay will likely get a rotation turn now that Pearson has been sent down. He allowed three runs in 2.1 innings after Pearson departed in Sunday's game against the Astros.

Some #BlueJays notes:
-Charlie Montoyo says Anthony Kay will likely get a rotation turn now that Pearson has been sent down.
-George Springer has been swinging a bat but no running. Montoyo says he’ll start running again Thursday.
-David Phelps (lat) had an MRI. No results yet.

Montoyo also said outfielder George Springer has been swinging a bat but has not been running. Montoyo says Springer will start running again on Thursday.

Reliever David Phelps had an MRI on his injured last but has not been given the results yet.