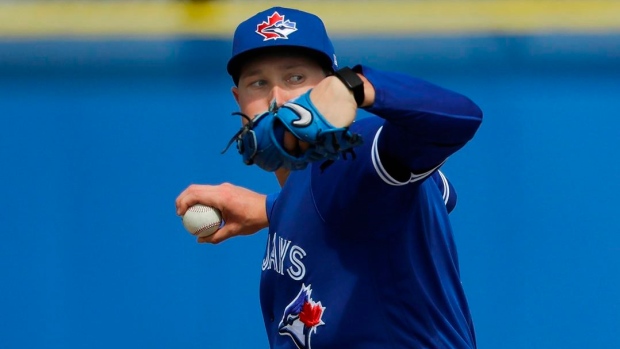 The makeup of the team around him has helped ease any nerves he may have had coming in.

Pearson, a 23-year-old right-hander ranked No. 8 on MLB's prospect list, is surrounded by players around his own age at Toronto's camp in Dunedin, Fla., including many who held upper-level prospect status as recently as last season.

"I'm definitely pretty comfortable," Pearson said in an interview with The Canadian Press last week. "Seeing Bo (Bichette), Vladdy (Guerrero Jr.), Cavan (Biggio), Jano (Danny Jansen) — that core group — they were just in my shoes a little while ago.

"So having them here, being able to talk to them, that has been useful. And it makes for a really loose atmosphere. You're not walking on egg shells in a room full of veterans here. It's been really nice."

Pearson, who's known for an impressive fastball velocity, threw live batting practice to some of those same players — including the 20-year-old Guerrero, formerly the top prospect in all of baseball — last week at TD Ballpark.

"He knows what he's doing for a young guy," Montoyo added. "I'm really looking forward to seeing him pitch."

Pearson, a first-round draft pick (28th overall) by the Blue Jays in 2017 out of Central Florida Community College, spent the bulk of last season with the double-A New Hampshire Fisher Cats before ending it with three starts at triple-A Buffalo, where he went 1-0 with a 3.00 earned-run average. He was 5-4 with a 2.30 ERA through all of 2019.

The six-foot-six pitcher will likely open the 2020 season at triple-A, but he could make his way onto the big league roster at some point over the year.

Pearson said he's trying not to put too much pressure on himself at camp though.

"I'm just treating it as a normal season," he said. "No one has bigger expectations for myself than I do. So I'm just focused on what I need to do to get better and let the rest take care of itself."

Pearson, who described himself as a "definitely a very powerful pitcher," has Blue Jays fans champing at the bit for his anticipated big league debut. Seeing him light up the radar gun at the MLB Futures Game last summer — he reached 100 miles per hour during the one perfect inning he pitched in the showcase — helped raise his profile significantly.

That profile could be raised even further over the next few months thanks to a different type of exposure for the young pitcher — having his likeness appear in the latest version of the popular MLB The Show video game.

The 2020 instalment of the game, which will be released in March, includes full rosters of minor league players for the first time. Pearson was one of the prospects prominently featured in a promo video released by Sony weeks ago.

Pearson described seeing himself in a video game as "pretty surreal."

"I grew up playing MLB The Show all the time on PlayStation," he said. "The fact that I was in one of the intro videos, that was pretty amazing. I was very excited and I can't wait to play, and play as myself, that will be a lot of fun.

"It's just so cool, at this time in my career, to be on a video game and have my friends be able to play as me or have little kids that had the same dream as I did playing as me. It's pretty cool."

Pearson has only seen the promo videos for the game, but he said the animated player he saw wearing his No. 38 Buffalo Bisons jersey did bear a strong physical resemblance.

The pitching motion didn't quite match up to his though. Not yet, anyway.

"I wouldn't say the mechanics were right, I think they kinda just threw something together there," Pearson said with a laugh. "Hopefully in years to come they'll get some better footage of me."