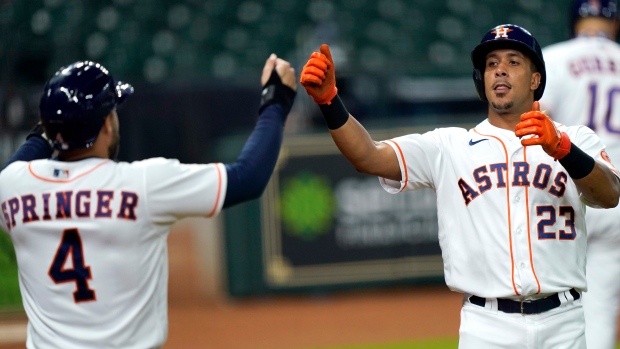 It appears the Toronto Blue Jays may not be done adding to their outfield after agreeing to a six-year, $125 million deal with George Springer.

TSN Blue Jays reporter Scott Mitchell says there's "legit legs to the Michael Brantley package deal" and the Blue Jays are very open to it, according to a source.

Mitchell notes adding Brantley, a 33-year-old left fielder, would create an outfield logjam, but notes the Jays could use the surplus to upgrade their pitching on the trade market.

There’s legit legs to the Michael Brantley package deal and #BlueJays are very open to it, per source.
It would create an outfield logjam, but the extra OF and catcher pieces in the system could be used to upgrade the rotation, which is the clear, clear, clear need at this point.

In addition to Springer, the Blue Jays also reached an agreement with free-agent reliever Kirby Yates on a one-year, $5.5 million contract plus incentives on Tuesday.