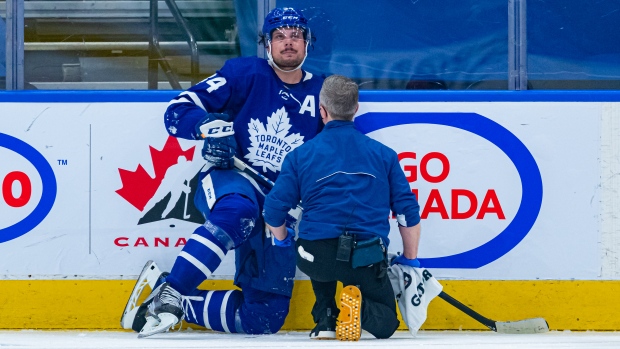 After the game, head coach Sheldon Keefe did not have an update on the Leafs’ leading scorer.

Matthews was battling with Hurricanes forward Nino Niederreiter when he fell into the path of an on-coming player and was inadvertently kneed in the back of the head.

No update on Auston Matthews from Sheldon Keefe

We know 34 won't be on the ice at Tuesday's practice, but that was already something scheduled

“He’s obviously a big part of our team,” forward Mitch Marner said. “He does a lot for us, especially in three-on-three hockey. I didn’t really see what happened. But obviously, it’s unfortunate. I’m going to try and check on him and make sure he’s all good.

“But hopefully, all is well with him.”

Matthews was already scheduled not to practice on Tuesday after returning from this past weekend’s All-Star Game.

With his two-goal performance, the 24-year-old has 31 on the season and trails only Edmonton Oilers forward Leon Draisaitl (32) and New York Rangers forward Chris Kreider (33) for the league lead.