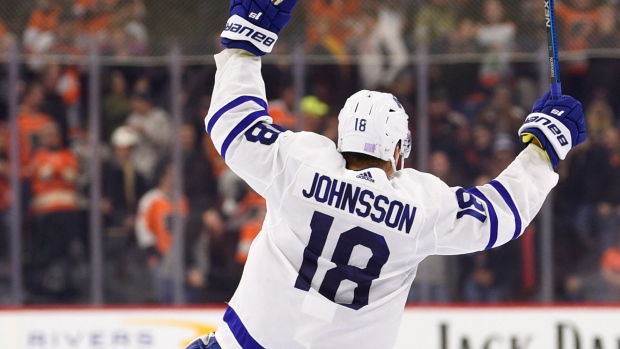 "We started asking guys to look up YouTube videos to see what guys had scored in the minors," Babcock joked. "Actually, we have a pretty good list, but you start to wonder for sure where you are going."

Andres Johnsson scored in the 11th round of the shootout to give the Maple Leafs a 4-3 victory over the Philadelphia Flyers on Saturday night.

Kasperi Kapanen, Jason Spezza and Mitchell Marner scored for Toronto, which received 37 saves from Frederik Andersen during regulation and overtime and 10 stops in the shootout session.

"I think everyone at tonight's game enjoyed it," Flyers head coach Alain Vigneault said. "For me, it was fun being part of it. I'm sure it was fun for the players to be a part of it. For the fans, I'm sure everyone had a great time tonight."

The 11-round shootout was the longest in Toronto franchise history dating to the start of the format during the 2005-06 season. It was the second-longest in Philadelphia's history, trailing only a 13-round loss to the New York Rangers in October2006.

The shootout period saw both goaltenders shine. Andersen and Elliott allowed one goal in the first 10 rounds of the shootout. In the 11th, Andersen recorded a glove save on Provorov from in close, while Johnsson was able to beat Elliott to the stick side for the winner.

"Just keep thinking who they're putting out and who we're putting out," Marner said. "Trying to guess where people are going to go. Hope Fred saves ours and hope we score on our chances."

Sanheim, Philadelphia's young defenceman, turned into a central figure earlier in the game. Sanheim was partially responsible for both of Toronto's goals in the first two periods, falling down while trying to change directions at the blue line, allowing Kapanen to break in and beat Elliott for his fourth goal of the season, giving the Leafs a 1-0 lead just six minutes in. Later, a Sanheim attempt to clear the crease of a loose puck was deflected home by Spezza to tie the game at 2-2.

However, Sanheim earned a bit of redemption just 31 seconds into the third when his backhander got past a sprawling Andersen for his first goal of the season and briefly gave Philadelphia a 3-2 advantage.

"We need him to be the player that he can be," Vigneault said. "He is fighting it right now. He is going through some growing pains. When he comes out of it, I am very confident that he is going to be a very useful player for this team."

That Flyers lead would disappear, however, when Marner turned a Sean Couturier neutral zone turnover into his fourth goal of the season by beating Elliott to the stick side, tying the game at 3 and sending it to overtime.

NOTES: Toronto captain John Tavares missed his seventh straight game with a broken finger. Tavares did practice on Friday for the Leafs and could return to the lineup on Tuesday night. . Giroux, who grew up in northern Ontario, has 35 points in 35 career games against the Maple Leafs. . Marner has points in four straight games. ... The teams will meet up again next Saturday night in Toronto.

Flyers: Continue a three-game homestand with a Tuesday night contest against the Carolina Hurricanes.