The Toronto Maple Leafs probably don’t need any more offensive firepower to advance out of the North Division. But this is a season underpinned by Stanley Cup expectations, and consequently the measuring stick for Kyle Dubas’ front office is how his lineup will stack up against teams like Tampa Bay, Carolina, Colorado, and Vegas further down the road.

That’s a tall order, and undoubtedly one of the reasons the front office has been actively working to shore up their roster despite serious salary cap constraints. Dubas got a notable deal done Sunday, engineering a three-team trade that saw the Leafs acquire winger Nick Foligno (with significant salary retention on top) from Columbus. The cost was three draft picks, including a first-round pick in this year’s entry draft.

Foligno will assuredly be a pure rental – it’s already been reported that Foligno is a likely candidate to return to the Blue Jackets through unrestricted free agency. Even if the Maple Leafs wanted to bring back the 33-year-old veteran, it’s unlikely they would have the cap flexibility to do so.

So why were the Maple Leafs so aggressive in their pursuit of Foligno? A lot of it has to do with his versatility and defensive impact. The Maple Leafs have attackers who can score in spades – the team is comfortably third in the league in rate scoring (3.4 goals per 60 minutes), and that’s part of a multi-year trend.

The versatility argument is rather obvious. Foligno can play every forward position and is a regular on both special-teams units. Over the past three seasons, Foligno’s averaged 2.3 minutes per game on the power play and 1.4 minutes per  game on the penalty kill. Productive middle-six forwards who can be deployed in any situation with a degree of trust from the coaching staff do not grow on trees.

But I think this is more about the defensive competencies he can bring to the Maple Leafs lineup.

If we look at Foligno’s on-ice numbers – this time focusing on even-strength play – we can see that the positive play he’s generally created is in the defensive third, with teams unable to generate meaningful shot quality or volumes with Foligno on the ice:

The defensive numbers have cratered a bit in 2020-21 (somewhat due to team quality), but this is a winger who posted relatively strong defensive performances over a five-year horizon, beating the majority of his NHL peers annually. And full up over the past five seasons, the Blue Jackets have outscored their opponents (+6) with Foligno on the ice.

Visualized, pay careful attention to how sustained Foligno’s defensive touch has been over the years. Teams have an incredibly difficult time getting to the interior when he’s on the ice, something that’s been a bugaboo of sorts for the Maple Leafs during postseason play, via HockeyViz: 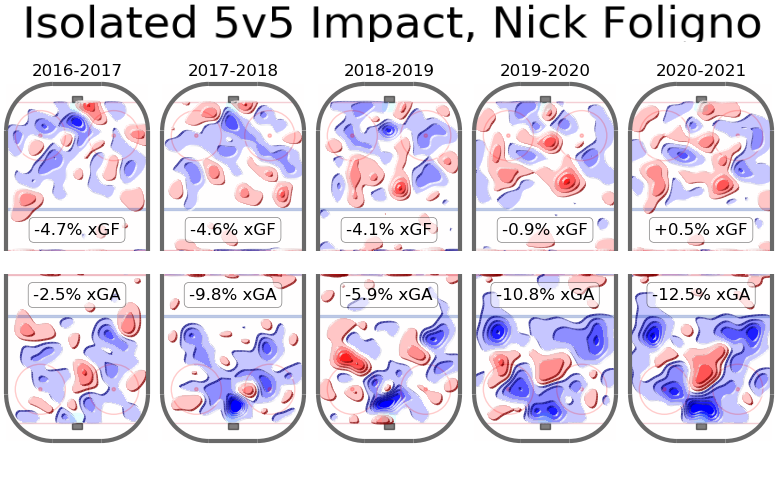 The bet here is that Foligno’s defensive touch is still sterling, and that his overall production – be it rate scoring on the offensive end or shot suppression numbers on the defensive side, has been hampered due to the Blue Jackets struggling as a whole.

Even more specifically to Foligno, we know there is less talent to go around in Columbus. Boone Jenner has been anchored to Foligno’s hip for an eternity now, but formidable linemates like Josh Anderson and Pierre-Luc Dubois weren’t options this season, and the famed Seth Jones and Zach Werenski pairing has been disrupted by injury.

He’s going to see a significant quality of teammate surge in Toronto. And whether he plays on John Tavares or Alex Kerfoot’s line, there is going to be an abundance of opportunity.

The only question left is whether or not Foligno can produce to the sizable cost he was acquired for – even Cup-contending teams are reticent to trade valuable draft picks, and the Maple Leafs need three months of strong two-way play from the veteran in order to get payback on this deal.