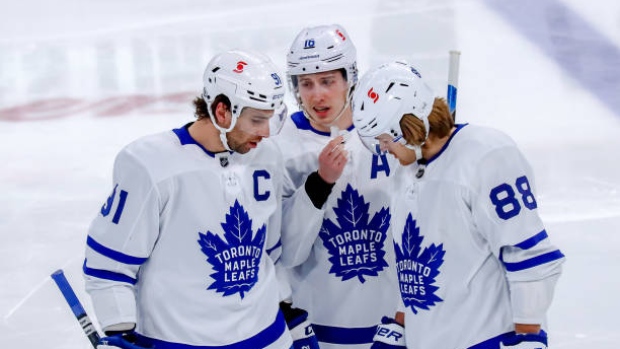 In an interview with Steve Simmons of the Toronto Sun, Shanahan noted that all four contracts were signed based off the assumption that the salary cap would go up before the COVID-19 pandemic ushered in a flat cap era. Still, Shanahan said he's happy to have all four players signed long term, despite the team's playoff failures.

“We’re happy that (big four) were locked up. We believe in those players. We feel we’re fortunate to have them," Shanahan said. "I’ve watched the development of the players, Mitch killing penalties, Auston’s two-way game. It’s not just those four guys. I’ve seen our team do a lot of things (since head coach Sheldon Keefe took over) that historically winning teams need to do.

“We need to improve. The important thing is that those things that Sheldon demanded from them get better. Even though it didn’t get results in Games 5-6-7 against Montreal, those are vital team-building blocks. Look at Mitch. He became an elite defensive player and still finished Top 5 in scoring. Auston led the league in goals and plays a great all-around game. They can be strong players and still be among the top offensive players.

“What we can’t do is get frustrated now. We can’t discard the plan. We can’t go on our own as individuals. We have to continue on this course, and I think the players are absolutely driven to get this done here in Toronto.”

The Maple Leafs have lost their opening series in the playoffs in each of the past five seasons, a streak that was extended by the team blowing a 3-1 series lead against the Montreal Canadiens in the spring.

Of the Maple Leafs core players, Marner has drawn the most criticism for his playoff performance, with four assists in the seven-game series.

“I look at a guy like Mitch, who from the moment he could put on skates, he was saying he wanted to be a Maple Leaf,” said Shanahan. “He’s a great teammate, a great two-way player, is an elite all-star who will likely be an Olympian, and all he wants to do is deliver here in Toronto.

“Yeah, he’s disappointed and frustrated. We all are. That reflects the mood of the entire team.”

General manager Kyle Dubas has also been steadfast in his belief of the team's top players, leading some to wonder if the Leafs are facing a 'last dance' scenario with their core this season.