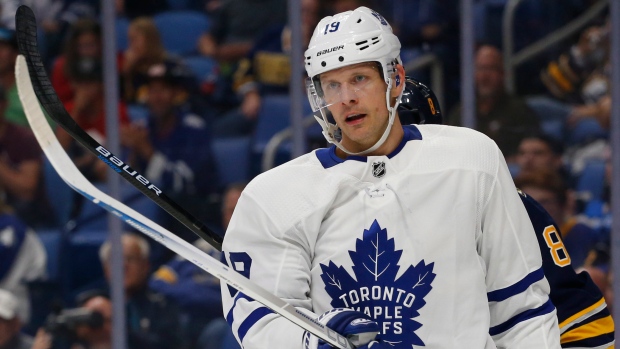 TORONTO – The Maple Leafs opened their regular season Wednesday with a 5-3 win over the Ottawa Senators, but head coach Mike Babcock is far from decided on what his team’s best lineup looks like.

So Babcock will make three changes to his group when Toronto travels to Columbus on Friday, subbing in Nic Petan, Jason Spezza and Justin Holl for Dmytro Timashov, Nick Shore and Martin Marincin.

“To be honest with you, we have some rotations we have planned,” Babcock explained after the Leafs’ practice on Thursday. “We start with four [games] in six [nights], and on the other side, you’re going to know a lot more [than if] we played four in a week and a half. I think at the start of the year everyone is pretty close to the same. As some teams earn confidence and other teams don’t, you separate yourself a little bit.”

Babcock said the Leafs will also have a third goalie around the team moving ahead, likely to take reps in practice to not overextend Frederik Andersen and Michael Hutchinson during busy stretches.

Babcock was open throughout training camp about how the Leafs’ roster could be a work in progress early in the season.

“When we made our decisions on our lineup, you’d like to say everything is set in stone and you know exactly what you’re doing,” Babcock said. “But that’s not necessarily true. [And] maybe there’s someone playing for the Marlies, too, that’s in the mix that we didn’t consider [or] didn’t prioritize as highly right at that time. So we’ll see what happens over the next bit.”

The Leafs made one move on Thursday, sending defenceman Timothy Liljegren back to the Marlies and recalling Petan.

Liljegren was one of two rookie blueliners, along with Rasmus Sandin, who made Toronto’s initial cut to 23 players this week, but he was a healthy scratch for Wednesday’s opener. Sandin played his way into another look on Friday with a solid plus-one performance in only 8:58 of ice time.

“He’s got good poise,” Babcock said of Sandin. “…I thought he was real good in the game and that’s why he’s playing again.”

Spezza, who was a surprise healthy scratch against Ottawa, will make his Leafs debut against the Blue Jackets.

Babcock initially tapped Shore over Spezza at fourth-line centre because of what he saw as deficiencies in Spezza’s penalty killing, revealing he’d play at Columbus instead. The Leafs didn’t actually do any work on the penalty kill at Thursday’s practice, but Spezza stayed out after the team portion to work directly with assistant coach Dave Hakstol, who runs the kill.

While Spezza is putting in the extra time trying to catch up, Babcock said it was on the coaching staff to have the 36-year-old ready to go before now.

“We didn’t do a good enough job at training camp,” Babcock said. “Our plan coming in was to penalty kill him all the time, and at training camp though we wanted him on the power play too [so it split up his reps]. We probably didn’t do a good enough job of that, so he wasn’t ready to kill on a regular basis. The last game he played, we didn’t have him up to speed. That’s not on him, that’s on us.”

Missing out on the home opener was difficult for Spezza, a Toronto native who took a pay cut on his one-year, $700,000 contract to play at home, but he flushed the frustration as fast as possible.

“I moved on the minute I knew I wasn’t playing,” Spezza said. “You just get yourself ready. This league is about constant preparation, whether you had a good game or a bad game, and for me, I didn’t even play. So you move forward."

Babcock will do the same with his continued tinkering of Toronto’s personnel, which doesn’t project to end anytime soon.

Zach Hyman and Travis Dermott skated with the main group at Thursday’s practice for the first time since undergoing off-season surgeries (Hyman tore his ACL in April, while Dermott had a shoulder operation following a mid-season injury last year). Both players are expected to be available by the start of November, which gives Babcock ample time to continuing assessing who will stay and who will go down the road.

“Nothing is ahead of schedule [with Hyman and Dermott],” he said. “So obviously they’re miles away, but they’ve been working real hard. We need them back because we’re way better with them, and obviously that’s huge depth. It’s important to get them back, but in the meantime other guys get a good opportunity.”