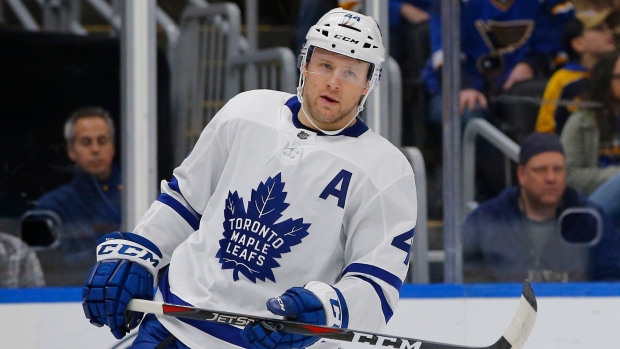 The Maple Leafs placed defenceman Morgan Rielly on injured reserve Monday after a CT scan revealed he sustained a fractured foot in Sunday’s 8-4 loss to the Florida Panthers.

Rielly blocked a shot in the first period of the game and was in some discomfort on the bench but did return to lead all Leafs in ice time with 21:03.

The Leafs’ top-pairing defenceman had already been dealing with a lower-body injury since the preseason. The ailment has forced Rielly to miss a handful of practices throughout the year, but so far he’d managed to skate in all 46 games for Toronto. In an interview earlier this month with The Athletic, Rielly wouldn’t reveal much about the injury, but said he was managing the pain fine and that recently he had started to feel healthier.

Rielly has been extremely durable for the Leafs throughout his career. The Vancouver native has played at least 73 of 82 regular-season games in each of his first six campaigns, making this projected absence the longest of his professional tenure.

Losing Rielly right now is another major blow for the Leafs’ blueline to absorb. They are already playing without Jake Muzzin, who has been sidelined since Dec. 29 with a broken foot, and Leafs’ head coach Sheldon Keefe said last week that Muzzin hasn’t started skating again yet.

Rielly has been carrying the Leafs' load defensively, leading the team in overall ice time at 24:15 per game, and averaging significant minutes on the second power-play unit (2:21 per game) and shorthanded (2:00).

In an effort to replace Rielly, the Leafs recalled rookie Rasmus Sandin from the American Hockey League’s Toronto Marlies on Monday. Sandin is fresh from Sweden’s bronze medal win at the World Juniors, a tournament in which the 19-year-old scored three goals and posted 10 points while being named best defenceman.

Sandin, 19, has been a relied upon top-pairing defender in all situations with the Marlies, tallying two goals and 15 points in 21 AHL contests. Selected 29th overall by the Maple Leafs in the 2018 draft, Sandin started the season with the Leafs, making his NHL debut in a six-game stint that produced two assists.

Playing four more games for the Leafs this season, almost guaranteed now with Rielly out, will trigger the first year of Sandin’s entry-level contract.

Aside from the addition of Sandin, Toronto will be looking for more from its blueliners already in the fold, most notably Travis Dermott. Keefe moved Dermott up to play with Justin Holl on the Leafs’ second pairing recently in an effort to ignite the third-year player’s game. Dermott logged his highest ice time (19:12) since last November in Sunday’s loss, and his role is projected to increase even further as Toronto adjusts without Rielly.