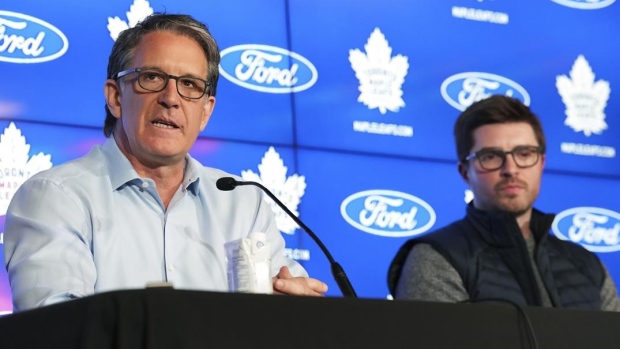 TORONTO — Brendan Shanahan got his housekeeping out of the way quickly.

In the wake of another playoff failure, the president of the Toronto Maple Leafs told reporters at the team's annual post-elimination media availability — once again far earlier on the calendar than anyone associated with the organization hoped — that general manager Kyle Dubas and head coach Sheldon Keefe would keep their jobs.

"Extremely disappointed," Shanahan stated in his opening remarks Tuesday. "We're not going to make any excuses.

"That being said, we will not be making changes just simply for the sake of saying that we made changes."

There's no doubt the Leafs played better in their 2022 first-round series against the Tampa Bay Lightning than in previous post-season showings that also ended in heartbreak.

The bar was also low.

Toronto had the two-time defending Stanley Cup champions on the ropes with two shots to advance this spring. Unlike last May's collapse against the Montreal Canadiens or consecutive losses to the Boston Bruins in 2018 and 2019 or its 2020 bubble setback versus the Columbus Blue Jackets, the moment didn't appear too big for a group, fairly or unfairly, shouldering the burden of past defeats.

But in the end, the result was the same in Game 7 for an Original Six franchise that hasn't advanced in the playoffs since 2004 — now the NHL's longest streak — or hoisted the Stanley Cup in 55 years.

"Proud of the progress that was made," Dubas said. "However, we weren't able to take the key step."

"I saw a different team and a different approach," Shanahan added. "In the past couple of seasons when we've had an opportunity to eliminate a team, we got back on our heels.

"One of the things that I liked about this year's process, despite the result, was that our team was on its toes."

And while Shanahan was clear about his GM and coach, Dubas did leave the door open for change to the roster, although some of that will be necessitated by salary cap constraints.

"But it's continuing to maintain that belief at this time that's vitally important."

The Leafs' core of Auston Matthews, Mitch Marner, William Nylander and Morgan Rielly have been part of the team's opening-round series losses each of the last six seasons, while captain John Tavares has seen four premature exits since joining his hometown club via free agency in 2018.

"It really stinks … we're disappointed," Tavares said. "The belief is strong in the group.

"We're gonna continue to do everything we can to finally get to where we want to get to."

Shanahan was once the missing piece as a player for a Detroit Red Wings outfit that finally reached its ultimate goal in the 1990s — the club sent Paul Coffey and Keith Primeau the other way to the Hartford Whalers in a blockbuster trade — but said the route to glory doesn't necessarily require addition by subtraction.

"There's lots of different ways to win a Cup," he said. "And we have to figure out our way."

Matthews and Nylander have two more seasons on their contracts, while Marner and Tavares are signed through 2024-25.

The situation with Matthews is one to keep a close eye on. Toronto's first chance to sign the NHL's first 60-goal man in more than a decade to a contract extension will be July 1, 2023. There's nothing to indicate Matthews is unhappy or looking elsewhere, but the clock continues to tick.

"We'd love to make him a Leaf forever," Shanahan said. "He's just been fantastic for us."

According to capfriendly.com, Toronto currently has just over US$74.65 million committed to 17 players next season. That leaves Dubas and Co. just under $7.85 million to divvy up between four or five other roster spots with the cap set to only bump up $1 million to $82.5 million as the league continues to emerge from the COVID-19 pandemic's economic gut-punch.

Despite the financial gymnastics the Leafs have managed in recent seasons, there's just no way to bring back the same group with the likes of goaltender Jack Campbell, defencemen Mark Giordano and Ilya Lyubushkin, and winger Ilya Mikheyev among the team's pending unrestricted free agents.

Timothy Liljegren and Rasmus Sandin are set to become restricted free agents on the blue line, while forwards Ondrej Kase and Pierre Engvall are in the same boat.

Matthews said the belief — a word repeated over and over Tuesday — remains strong this is the right mix that will eventually get Toronto over the playoff hump despite now sitting an ugly 0-9 in games with a chance to eliminate an opponent since 2018.

"I believe it," Matthews said. "I think everybody in this room believes it.

"I know that deep down in this room that we all believe in each other. Still a tough pill to swallow, but I don't think that belief ever wavered."

Toronto defenceman Jake Muzzin, a Cup winner with the Los Angeles Kings, said the key will be to come back in September knowing that, despite all the positives, there's still more to give.

"Got to find another gear," he said. "Everyone in the room, we need a little bit more."

The Leafs, to a man, are convinced this season was a step forward.

Time will tell if that's the case.

"Progress was made, even though it's hard to feel that way," Keefe said. "The work toward next season has already begun.

"The belief in our group is as strong as it's ever been."

The Leafs confirmed Marner was the victim of a carjacking Monday night in the city's west end.

The winger was at Toronto's practice facility Tuesday, but not available to reporters.

Veteran forward Jason Spezza was in tears as he left the ice following Saturday's Game 7 loss.

Set to turn 39 next month, the Toronto native said it's too soon to make a decision on his playing future.

"I love the game," said Spezza, who added he will only suit up for the Leafs. "Conversations will happen over the coming days and weeks.

"I'm a little lost right now, to be honest."

Giordano, another grey-bearded Toronto native, is open to continuing in blue and white if things make sense.

The 38-year-old defenceman had two goals and 12 points in 20 games in a depth role after being acquired from the Seattle Kraken prior to the trade deadline before adding two assists in the playoffs.

"I don't think it's a secret that I enjoyed my time here," Giordano said. "It's been an awesome experience."