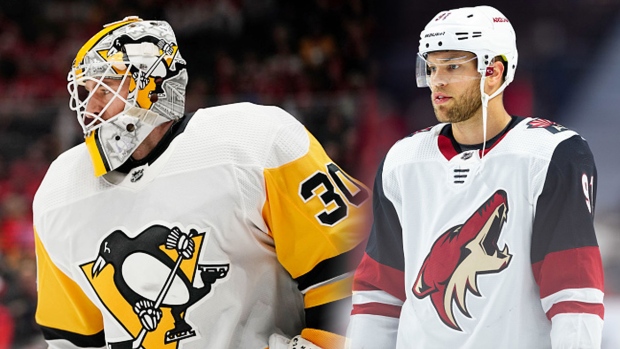 TSN Hockey Insider Darren Dreger joined host Glenn Schiiler to discuss goaltender Matt Murray potentially being linked to the Maple Leafs, the latest on Taylor Hall's situation with the Coyotes and when the 2020-21 NHL season might begin.

Goaltender Matt Murray is No. 1 on TSN’s Trade Bait Board. Has he been linked to the Toronto Maple Leafs?

Dreger: I would say long-standing, though. This isn’t a new development. I think that Kyle Dubas, who knows a lot about Matt Murray dating back to the Soo Greyhound days in the Ontario Hockey League, he’s had a lingering interest in Matt Murray and it just comes to the forefront now because we know Jim Rutherford and the Pittsburgh Penguins are trying to move their decorated goaltender. I know that there is at least one offer on the table that Jim Rutherford would consider for Matt Murray. I do not believe that it belongs to the Toronto Maple Leafs. And let’s not forget, there’s some complications. What does Toronto do with Frederik Andersen? Not unlimited cap space for Kyle Dubas and the Toronto Maple Leafs, so it makes sense that if Toronto is able to move on Matt Murray then they’d have to have a landing spot outside of Pittsburgh for Frederik Andersen. So, it’s complicated but yes, there would be interest in Matt Murray. But I look at some of the other Canadian teams. I look at Ottawa, I look at Edmonton, I look at Calgary, these are teams that are perhaps also in the market for some stability in goal so Matt Murray moving forward could be a hot commodity.

Are they making any progress on a Taylor Hall extension in Arizona?

Dreger: Well, they’re trying, there’s no doubt about that. Looking for a counteroffer, I think, from Taylor Hall. The Arizona Coyotes have made it abundantly clear that they want to keep Taylor Hall. However, every player has his right to unrestricted free agency so it is going to take market value or maybe beyond market value for the Arizona Coyotes to buy him away from taking a look at what free agency might provide. And let’s not forget that the Coyotes are also in the market for a full-time general manager. So there’s some complications, but I do believe that the Coyotes will make a very attractive offer and then it’s up to Hall to decide whether he wants to go to free agency or stay.

Dreger: Well there has been lots of talk, but the reality is it’s speculation at this point. I mean, the top of the National Hockey League, the top of the NHL Players’ Association, of course they’ve had conversations on what the start of 2020-21 might look like. Pie in the sky, the perfect world from the NHL’s standpoint is that early December start which commissioner Bettman has talked about for months now. Is that reality? We’re going to find out. But know this – they have not made any decisions. So, anything you hear out there, be it a full-time Canadian conference or hub cities, all of that, is very speculative from a media perspective. Those might be scenarios that are being discussed, but no decision has been made and there probably won’t be for a while.