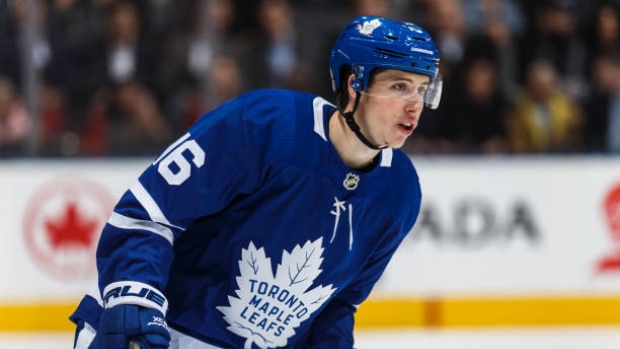 TORONTO – Star winger Mitch Marner suffered an ankle injury early in the second period of Saturday’s 3-2 shootout loss to the the Philadelphia Flyers.

According to TSN Hockey Insider Darren Dreger, the Leafs winger is scheduled for an MRI on Sunday to determine extent of his ankle injury.

Mitch Marner is scheduled for an MRI today to determine extent of his ankle injury.

Marner was out for the second period’s opening face-off and took an awkward fall over Carsen Twarynski’s stick, struggling to stand up and get off the ice. The winger eventually pushed himself along the ice back to Toronto’s bench, making it look as though it was his skate blade, and not an injury, that hampered him.

After missing his regular shift on Toronto’s first power play unit, Marner appeared with the second group instead, but went immediately to the Leafs’ dressing room after completing a 35-second shift.

During the next TV timeout, Marner came onto the ice and skated around to test the area, stopping to check in with Leafs’ trainer Paul Ayotte on the bench. When play resumed, Marner sat on the bench and continued talking with Ayotte, before going back to the Leafs’ room a final time.

During his post-game media session, Maple Leafs head coach Mike Babcock said that Marner will not travel with the team for their game Saturday against the Chicago Blackhawks. Babcock also said that he doesn't know the extent of Marner’s injury at this point, whether it’s days or weeks.