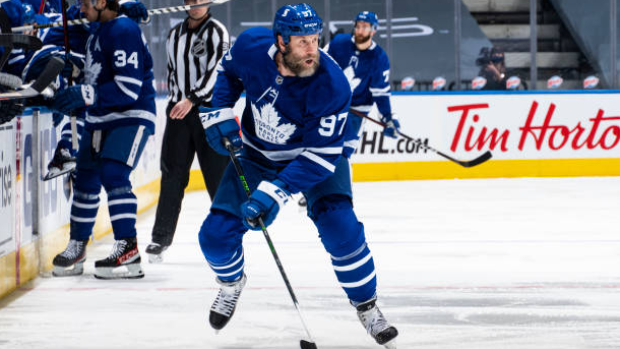 Head coach Sheldon Keefe announced Friday morning that Thornton will miss a minimum of four weeks with the rib fracture, while Auston Matthews is day-to-day with upper-body soreness. Both are out Friday against the Edmonton Oilers.

#Leafs announce officially that Joe Thornton has been moved to LTIR

Thornton was injured in the third period of Wednesday's 3-1 loss to the Oilers. Keefe said after the loss it "definitely" looked like the veteran forward would miss time with the injury.

The 41-year-old is in his first season with the Maple Leafs, and 23rd in the NHL, after signing with the club in the off-season.  He has recorded one goal and one assist this season.

Matthews skated briefly before the team's practice on Thursday, but departed the ice before the team session began. Keefe said after the practice that Matthews "wasn't feeling great" coming off the game against the Oilers.

Keefe said Friday he's "not too concerned" about Matthews, with the team opting to take a cautious approach with the 23-year-old not feeling 100 per cent.

Leafs are 20-12-2 without Auston Matthews, per @StatsCentre.

Matthews logged 24:14 of ice time in Wednesday's loss, scoring the team's lone goal. He has two goals and five points in five games this season.

With the star centre sidelined on Friday, Keefe said the team would dress 12 forwards and six defencemen, with Alexander Barabanov, Pierre Engvall and Adam Brooks drawing into the lineup. Defenceman Mikko Lehtonen is expected to exit the lineup with the team dropping back down to six blueliners.

With Leafs going back to six D tonight, Mikko Lehtonen & Rasmus Sandin are the projected scratches; Both are on the ice late at the optional skate

Dermott & Bogosian on the third pair