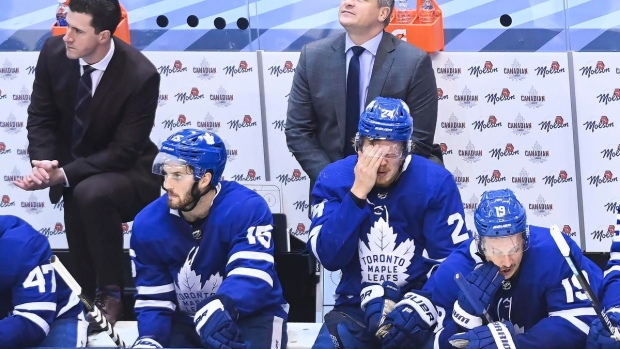 TORONTO — If there’s one consistent theme to the Maple Leafs’ performance in recent years it’s falling short of expectations, with one quick postseason exit bleeding into another despite a roster laced with top-end offensive talent.

That core - Auston Matthews, Mitch Marner, John Tavares and William Nylander - soaks up nearly half of the team’s salary cap, but couldn’t prevent the Leafs from getting shut out in two of their five games against Columbus. The qualifying-round loss makes it four straight years Toronto hasn’t advanced in the postseason. ​

But watching that same story unfold again doesn’t appear to have set the stage for an off-season overhaul. Leafs management seems determined to stick with its nucleus for now.

“I have complete faith in Kyle [Dubas] as a general manager, in Sheldon [Keefe] as a coach, and complete confidence in what we're going to do here in Toronto,” said Leafs president Brendan Shanahan on a Zoom call with reporters Wednesday.

“We’re determined to get results. It has to do with a mindset; it has to do with some personnel issues. But there are no excuses being made here. It's really about finding solutions, so that we get over that hump. We really do believe that the core guys certainly want to make those changes."

That was the clear message from all 10 Leafs players who spoke on Wednesday, now three days removed from Columbus sending them packing in a 3-0 Game 5 defeat.

It was a fitting bookend to the series, which opened with a 2-0 Blue Jackets win in Game 1. Toronto pitched a shutout of its own to win 3-0 in Game 2, then blew a three-goal lead to lose Game 3 before overcoming a three-goal deficit to win Game 4.

Even with copious amounts of firepower to wield, the Leafs only managed three even-strength goals the entire series - one each from Matthews and Tavares, and one from rookie Nick Robertson. Marner didn’t score once in all five games. Tavares had three points.

“I think four years in a row [failing to advance] is obviously pretty frustrating, and a little bit embarrassing as well with the talent we have,” said Matthews, who had a team-leading six points in the qualifying round.

“We haven't really been able to pull through. The results in the playoffs haven't shown, but with the core group that we have, we really believe that we're right there. And to be honest, we don't really care what other people think. We believe…that we're going to power through this adversity and we'll break through eventually.”

Dubas is keeping a similar faith surrounding the team's core. In the past, he's seen successful teams blossom by being patient, and avoiding rash decisions at the first signs of perceived regression.

“I would love for the progress to be linear. I’d love for us to [have won] the Stanley Cup two years ago, and then win it every year,” he said. “But I think progress never really follows the straight line that you want it to. There are lots of teams that go through significant ups and downs on their way to getting to where they all want to go, and when they know that the [core] has the character and the talent to do it, they try to stick with it and not overreact.”

Shanahan noted there's a difference in players this season compared to after other early exits, and that now “they’re extremely angry – angry with themselves.”

According to defenceman Jake Muzzin, that emotion is what will help Toronto reach another level.

“This group needs to dig in more,” said Muzzin, one of two players on Toronto’s roster to have won a Stanley Cup. “Yeah, we have lots of skill and talent and speed, but when it comes to playoff hockey, the will to win has to burn a little bit hotter compared to the other stuff. Once you find that then you can be dangerous.”

The problem is Toronto has been slow on the uptake. Four years ago, a rookie-laden Leafs team that finished 30th overall the season before took Washington to six games in the first round.

The next season, Toronto fell again in the opening round, this time to Boston, in seven games. The year after, they had two chances to close out the Bruins and advance to the second round, but dropped Game 6 at home and Game 7 on the road.

“It's hard. Playoffs are hard; every game is hard,” said Zach Hyman. “The reason teams win is because they dig in and they're hard to play against, so we just have to find another level and bring consistency to our game. It sucks, and we're building towards being in a position where it's gonna stop sucking."

“It's a little bit [of a] mental [issue], but we're close,” added Muzzin. “Last year we said that, but I believe that this group is capable of winning it all and we're looking forward to doing that. I think we have a lot of guys in there that want to win. And that's the belief I have. The wanting to win is crucial, that drives players, and I believe it's in there.”

Dubas has literally banked on Toronto’s current core to keep the team competitive. The NHL is projecting a flat salary cap of $81.5 million for at least the next couple of years, and CapFriendly has the Leafs with $4.591 million in space available for the 2020-21 season.

That doesn’t seem like much for a club that could possibly be replacing Tyson Barrie and Cody Ceci on the blueline, and has to re-sign restricted free agents Travis Dermott and Ilya Mikheyev. But Dubas balks at the notion Toronto is in financial trouble, or that he won’t be able to bolster the team’s roster to enhance its key players.

“We're not up against the cap, contrary to everyone's belief,” Dubas said. “I think that the players we've committed the salaries to are all extremely talented, and they all produce, and they're all very young, and they're going to continue to improve and get better. It falls on me to continue to build around that group and roll from there.”

With the vote of confidence from Shanahan already in place, Dubas will get to work evaluating the entire organization, from staff to players. There’s no set date yet for when the next NHL season will start, but when that day comes, the Leafs best be ready to deliver.

“No one's happy right now. And we shouldn't be,” Muzzin said. “The ultimate goal is to win the Stanley Cup, but when you don't reach your goal, why would you be happy? Guys are frustrated and I hope that burns and stays with us until we get another chance.”