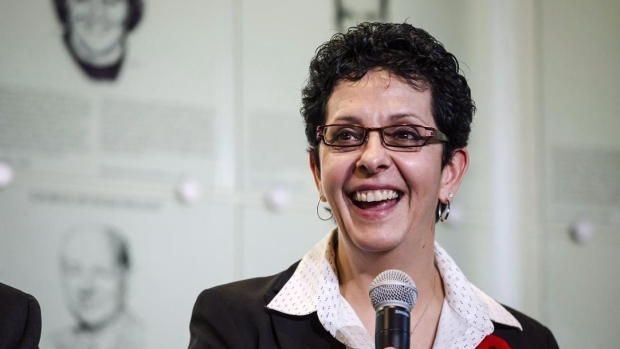 Wickenheiser, who recently received her medical doctor's licence and will start a residency in a Toronto hospital, joined the Leafs in 2018 as assistant director of player development.

"It goes without saying she's made significant contributions to the sport, both as a player and the now in her role that she's had with our team over the last few years" Maple Leafs head coach Sheldon Keefe said Monday.

"I worked with her a lot in my time with the Marlies when she was working in player development. She really helped bring a lot to the player development program, and I learned a lot from having conversations with her.

"So to have her take a significant step into a leadership position now within the player development program is a huge win for our organization."

Goyette resigned as head coach of the University of Calgary Dinos women's team Monday after 14 seasons there.

Goyette was also assistant coach of the Canadian Olympic team that won gold with Wickenheiser in 2014.

Both women are inductees into the Hockey Hall of Fame.

"Goyette and I have worked together in so many capacities, on the ice as teammates, on the bench when she coached me at U of C, in various business projects, and now this," Wickenheiser told The Canadian Press in a text.

"There is an innate trust, ebb and flow of ideas and information and always a little healthy debate. It’s great to work alongside someone like that within an organization like the Maple Leafs that values all of the above." Wickenheiser, a 42-year-old from Shaunavon, Sask., is the all-time leader in Canadian women's hockey team scoring with 168 goals and 211 assists in 276 games.

Goyette ranks fourth 15 years after her retirement with 114 goals and 105 assists in 172 games.

The Leafs also promoted Will Sibley to director of development operations and analysis, while Darryl Belfry will oversee technical development of the club's players and staff.

Goyette won Olympic gold in 2002 and 2006 and a total of eight world championship gold with the national women's team. She was Canada's flagbearer in the 2006 Winter Olympics.

"I don't know Danielle Goyette other than to say she's very much like Hayley in terms of her accomplishments on the ice as a player, as a member of the national team, and has been coaching the last number of years and has had success," Keefe said.

Goyette, a 53-year-old from Saint-Nazaire, Que., took over as head coach of the Dinos after retiring as a player in 2007.

"Developing players is what she has done on a daily basis. She lives and breathes hockey and her experience with coaching, skills and organizing a program, makes a great fit for the job.

"I couldn't be more excited to be working with her again."

The Dinos won a national university championship in 2012 and had a record of 213-197 with Goyette.

"I feel fortunate to have had a chance to make a difference for so many young hockey players," Goyette said in a statement released by the university.

"I have grown a lot as a person and as a coach, and I had the chance to work with so many great people.

“On the other hand, what an honour to have a chance to work for one of the best sports organizations in the world.

"This opportunity was too good to pass up. It's a new challenge and I’m looking forward to working with the Maple Leafs and the Marlies."

— Donna Spencer in Calgary and Joshua Clipperton in Toronto contributed to this story.