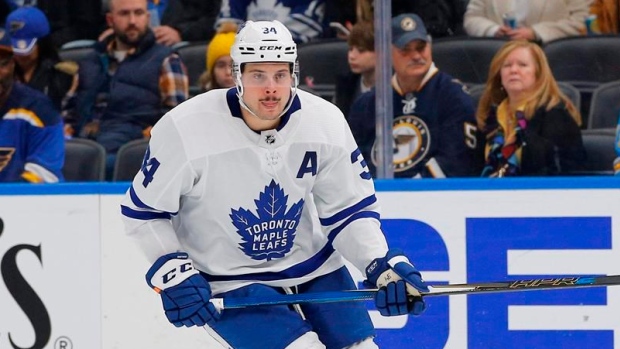 TSN Maple Leafs reporter Kristen Shilton checks in with news and notes on the Maple Leafs. The Maple Leafs are taking on the Sabres in Buffalo in the second half of a back-to-back.

Ahead of their second game in as many nights, the Toronto Maple Leafs are riding out Sunday afternoon to see how the continuing flu bug and various bumps and bruises will impact their lineup against the Buffalo Sabres.

“We've got some game-time decision type stuff,” acknowledged head coach Sheldon Keefe after the Leafs’ team meeting at Keybank Center in Buffalo. “Really we're just going to get through the afternoon and see where we're at and how one thing affects another.”

To avoid being shorthanded before puck drop, the Leafs recalled forwards Egor Korshkov and Mason Marchment from the American Hockey League’s Toronto Marlies on Sunday morning but Keefe couldn’t say where or how either will fit in just yet.

“We haven't made any determinations on what we'll do with those guys,” Keefe said. “But we needed to have extra guys available for today just to have them as options. Just with the nature of the back-to-back and the way things have been going with our guys, we just want to make certain that the group is ready.”

This is the first NHL recall for Korshkov, who’s in the midst of his first full season playing North American hockey. Selected in the second round, 31st overall, by Toronto in the 2016 NHL Entry Draft, Korshkov originally joined the Marlies for their postseason run last spring from Yaroslavi Lokomotiv of the Kontinental Hockey League, for which he played from 2014-19.

This season in the AHL, Korshkov has 21 points (14 goals, seven assists) in 35 games, and Keefe is now seeing real strides in how the 23-year-old is translating his game in new surroundings.

“He's a guy that's really worked to find his way and get comfortable in North America,” Keefe said. “You could see he's a guy who's trying to figure a lot of things out in terms of the structure and the positioning and the language and the style of play. In the games I've watched recently and all the reports that I've gotten, it's starting to click for him and he's playing with lots of confidence offensively, being very good with the puck.”

Keefe emphasized that whenever Korshkov makes his NHL debut, having success at this level will hinge on his ability to execute differently than he’s been asked to in the past.

“Obviously his size and physicality, those are the things that he brings that are there all the time,” Keefe said of the 6-foot-4, 214-pound winger. “We need him to come here and play in a different role. If he was ever going to play in the NHL, he's going to have to start probably in a situation where he's not going to play a lot and have to make those adjustments where he's going to have to really take advantage of every shift that he gets.”

It was nearly déjà vu all over again for the Leafs in Ottawa on Saturday, when their 3-0 lead in the second period was swiftly cut down to 3-2. But a little bend-don’t-break attitude saw Toronto through to the other side in the eventual 4-2 win.

“Even when we gave up the goals, we didn't stop playing our game,” said Mitch Marner. “I think we kept going forward, kept playing with pace and that's going to be important [again] tonight.”

It’s a mindset that Toronto needs to keep at the forefront, and not let struggles in their recent past become a recurring theme. The Leafs had four straight games earlier this month in which giving up leads either led to defeat or difficult wins in overtime, and the fewer of those self-inflicted wounds there are to deal with now, the better.

“What we've tried to do is just make it clear to guys that we had a bad week in that regard and we don't want it to become a habit,” Keefe said. “You don't want to make it a bigger deal than it needs to be.”

Coming off Saturday’s win in Ottawa, where the Senators pulled within one with just over 10 minutes to play in the third period, Keefe was pleased with how his team managed the game from there, but knows they also didn’t capitalize on opportunities given.

“Yesterday, we give up the goal [to Cody Goloubef] in the third and it makes things a lot closer than they probably should have been,” Keefe acknowledged. “Then I think three or four times we were in alone on their goaltender and really could have broken the game wide open and it would have been an entirely different image of the period. But I did think it was a good period in the sense that we played on the attack and we controlled the play. And when they had their push they didn't get a whole lot other than some perimeter stuff so that's a good sign for us to be able to be like that more consistently.”

The chance to get back on the ice right away, and face an Atlantic Division rival in the Sabres is also good news for the Leafs as they strive to win both halves of a back-to-back for just the second time this season.

“We were able to implement some different things in our game plan that translated to a little bit more offence,” said Justin Holl of Saturday’s victory. “And then just being able to hold a lead in the third, it's not something that we doubt in ourselves, but we obviously in the past week had some trouble giving leads away so it's just better to get back on the horse that way and have success and I think it's just encouraging for us to win and hopefully we can get rolling.”

After scoring his 42nd goal of the season in Saturday’s win, Auston Matthews tied the Boston Bruins’ David Pastrnak for the NHL lead in goals and took one step closer to securing the first 50-goal campaign of his career.

Marner jokingly denied the rest of the Leafs are monitoring Matthews’ progress towards the feat, before admitting that of course they’re all in his corner.

“That 50-goal mark, not many people have done it,” Marner said. “It's a hard number to reach, so I think we're all very aware of where he's at and what number we want him to get to. We got a lot of games left so hopefully we can get that number.”

As one of Matthews’ linemates, Marner knows he has a role to play in what Matthews will accomplish over the final 23 regular season games, and he’s determined to execute it well.

“I think for us, just trying to make sure we don't try and overdo the passing and try to do too much with it,” he said. “But at the same time, we know he can score so we're not afraid to get it in his hands.”

Being one-half of Toronto’s shutdown defence pairing with Jake Muzzin, Holl is on the ice frequently with Matthews at even strength as well, and can see why he’s been able to wreak havoc of defences throughout the NHL.

“The things that [he] does on the ice every night are pretty impressive,” Holl said. “And he's just so in control out there so it's really fun to see him have the kind of success he's been having and we're looking forward to seeing a little bit more of it.”

While Matthews has already passed his previous career-high of 40 goals, Marner said there isn’t much different about his close friend his year than he’s seen in any other. But the fact Matthews has been able to stay healthy all year to date, and has seen his minutes increase to 21:19 time on ice per game under Keefe, is certainly helping him to raise the bar.

“He's the same guy as the last three years as well,” Marner insisted. “When he gets his opportunities, he's not missing and he's been great to watch this year and he's been a threat to every team we play against.”

Holl didn’t show up on the scoresheet in Toronto’s victory over Ottawa on Saturday, but that didn’t stop Jack Campbell from passing on the Leafs’ game ball to him anyway.

“Just because he's so steady back there,” Campbell explained of the move after. “He's such a great guy and makes me laugh a lot and I love having him. It's awesome, keeps the boys loose and ready to play."

The gesture wasn’t something Holl expected, but he appreciated it all the same.

“It means a lot,” he said. “I think just being recognized by a teammate anytime for your contributions, it feels good. I thought I was pretty good in some aspects. I can obviously be better in other aspects too but I thought we got the win and we were able to shut them down at the end of the game so that was important and it was nice of Soup to give me the ball.”

In less than two weeks since being traded to Toronto from the Los Angeles Kings, Campbell has had a major effect on his new teammates, using a good attitude and even better play to cement himself as the back-up goaltender the Leafs have been desperate to find in complement to Frederik Andersen.

“Jack's been unbelievable in that net, he just brings calmness and I think just calms down the team,” said Marner. “A lot of those chances last night were Grade-As and especially late in the game with how calm he was in the net and how he took it, I think just kind of made our team feel that we're not worried either.”

Keefe made the decision to give Andersen an extra day of rest as he works his way back from a neck injury that forced the Leafs’ starter out of action for four games. Andersen came back to make 16 saves in a 3-2 loss to Dallas on Thursday, but he’ll get the green light again on Sunday in Buffalo.

“We're hoping that [the extra rest] helps him,” said Keefe. “Of course we made the decision to give him an extra day to practice and get working yesterday to be prepared for today. So we need to get him in the net and get him more reps and get him back to playing more regularly and we're anxious to give him that chance today.”

Having a one-two punch in net with a pair of reliable goaltenders would be a coup for the Leafs, and alleviate one of their primary stressors from throughout this season.

“It's great having Freddie back now, he's been our backbone really for the last three or four years here,” said Marner. “So it's great having him back and healthy. Jack's been great when he's in that net so either goalie in net we have confidence with.”

“[Jack’s] a great guy, really easy to like, easy to get along with and he's been playing great too,” said Holl. “So I think the whole combination of it has been really positive for our team and I'm really happy to see him having the success he's having so far.”