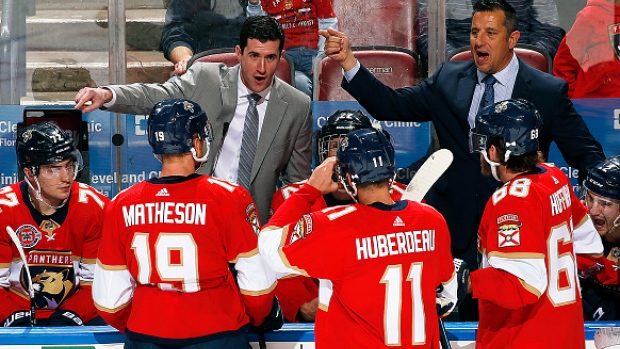 The Maple Leafs have announced the hiring of Paul McFarland as an assistant coach on head coach Mike Babcock’s staff.

A native of Richmond Hill, Ont., McFarland fills one of two coaching vacancies in Toronto after former assistants D.J. Smith and Jim Hiller both departed the organization earlier this month.

The @MapleLeafs announced today that the hockey club has hired Paul McFarland as an assistant coach.

The Maple Leafs also announced assistant coach Jim Hiller has been granted permission to explore opportunities outside the organization.

Smith left to take over the Ottawa Senators head coaching job, while Hiller has been given permission from the Leafs to pursue other opportunities.

"I'm extremely excited to be coming home and joining the Maple Leafs organization,” said McFarland, via a press release by the team. “The Leafs have a great, young team and this is an amazing opportunity to work with Mike, his staff and these talented players."​

Change seemed inevitable in Toronto’s coaching ranks after the team was eliminated by the Boston Bruins in the first round of the Stanley Cup playoffs in April, marking the Leafs’ third consecutive first-round exit.

The first of those will be McFarland, who was a guest coach at Leafs’ development camp in 2016. The 33-year-old spent the last two seasons as an assistant under Bob Boughner with the Florida Panthers, primarily working on a power play that was ranked second in the NHL last season.

McFarland and Boughner were both let go in April after Florida failed to make the playoffs. He is expected to fill Hiller’s post working closely with forwards and the power play. The Leafs are in the process of identifying another assistant to take over Smith’s role working with the defence and penalty kill.​​

Prior to accepting his first NHL job, McFarland was head coach of the OHL’s Kingston Frontenacs from 2014-17, collecting a 111-71-22 record and reaching the postseason in all three campaigns Before that, McFarland was an assistant coach on Smith’s staff with the OHL’s Oshawa Generals from 2012-14.