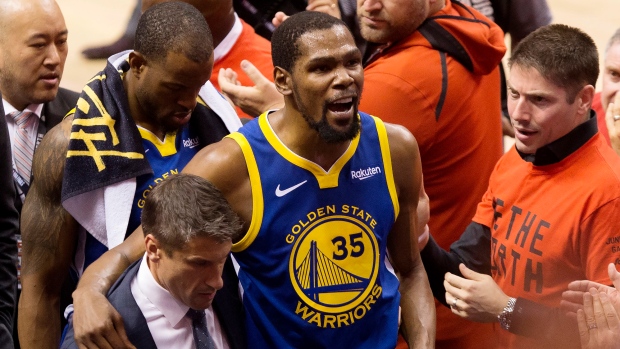 After some fans cheered when Golden State Warriors superstar Kevin Durant was injured during Game 5 of the NBA Finals, Toronto Raptors fans donated more than $30,000 for Durant's charity foundation.

Durant suffered a ruptured Achilles and underwent surgery Wednesday to repair it.

Basketball fan and Toronto resident Hamzah Moin started a GoFundMe page on behalf of Raptors fans and Canadians. "We're sorry that some fans of Raptor Nation... displayed an ugly side of fandom when they cheered on the injury of Kevin Durant. This isn't cool. This isn't right. This isn't what I expect from fellow Canadians. Yes, we're hungry for a championship however true NBA fans would never cheer on a man getting injured or wave goodbye as they limp to the locker-room area.. KD is a player that brings up the game of basketball." Moin wrote in the fundraiser's description.

The mission of the Kevin Durant Charity Foundation is to enrich the lives of at-risk youth from low-income backgrounds through educational, athletic and social programs.