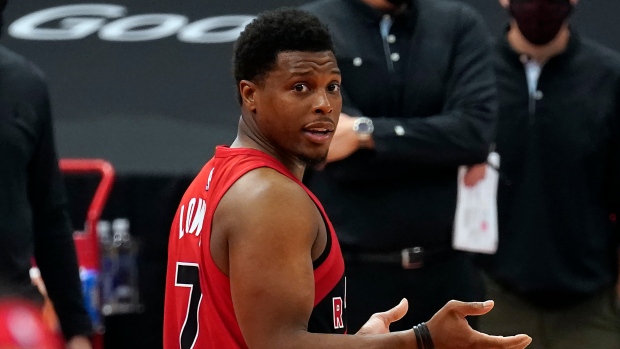 TORONTO – There was a play in the second half of Friday’s game against Sacramento that pretty much summed up the night – or at least three quarters of it – for Toronto.

The Kings held a 13-point lead late in the third quarter, though it felt like it should’ve been bigger. In spite of themselves, the Raptors were doing enough to hang around. They hadn’t played well on either end of the floor – particularly on defence, where they had already surrendered 93 points in fewer than 33 minutes – but the game was still in reach. All they needed was to string together a few stops, and then go from there.

That’s what made plays like this one especially frustrating. Hassan Whiteside caught the ball in the post. With Aron Baynes on him, Fred VanVleet came over to help. Whiteside made a good read out of the double and found Cory Joseph open at the top of the arc. Matt Thomas was late to rotate over, leaving the former Raptor and Pickering, ON native with a clean look. He missed.

Four Raptors players stood in or around the key watching the ball but none of them boxed out Kings rookie Tyrese Haliburton, who came in from the corner and tapped the offensive rebound to Buddy Hield. The possession ended the way it started, with Whiteside in the post – this time laying the ball in over the outstretched arms of Pascal Siakam and increasing Sacramento’s advantage to 15 points.

Those are the type of defensive sequences that drive coaches crazy, and with good reason. The Raptors didn’t contest the shot – a function of poor communication, leading to poor execution – and yet, they couldn’t secure the rebound. It wasn’t a case of a weird bounce off the rim, either. Haliburton, who is barely 15 games into his NBA career, didn’t have superior positioning. He just wanted it more.

“I just think we weren’t real connected on defence again,” Nick Nurse said following his team’s 126-124 loss – their third straight defeat, dropping their record to 7-12 on the season. “There were a lot of those gaping mistakes.

“I think they were taking it right to the front of the rim on us and we weren’t doing a good job of controlling the ball. There wasn’t the early help, late help was a little late as well. And then we would happen to get them to miss one, they’d crash the glass on us and get another crack at it there for a while. We just weren’t very good defensively is the main thing.”

Finally, after letting the Kings have their way for most of the first 36 minutes, the Raptors came to life and made a game of it in the fourth quarter. Sparked by the energy of Yuta Watanabe, DeAndre’ Bembry and Stanley Johnson, as well as 18 combined points from Kyle Lowry and VanVleet, they chipped away at the deficit.

With one minute left, Watanabe’s layup saved a broken possession and got them within one point, and then things got weird. Down by four points with six seconds left, and without a timeout, they opted to go for a quick two – a strange decision coming out of the huddle. Then, in a three-point game with four seconds remaining, referee Natalie Sago assessed Lowry his second – seemingly soft – technical foul of the night, prompting his ejection.

“I definitely didn’t think it was warranted,” Lowry said afterwards. “I didn't do anything. And I wasn't looking towards the official or anything. Literally. Was she the only person that heard it?”

“She said that he said something that she couldn’t let go by,” said Nurse. “She wouldn’t tell me what that was.”

Still, it’s hard to point the finger at late-game execution or decision-making, or the officials, after a loss the Raptors earned themselves. If they had played even a few more minutes with the gusto they showed in the fourth it might have been enough. If they came out with the same energy, effort and focus that they displayed in a hard-fought loss to an elite opponent, the Milwaukee Bucks, just a couple days earlier this would have been a very business-like win. Instead, it’s another chapter in their disappointing start to the campaign.

“We can’t let that happen,” said Siakam, one of Toronto’s lone bright spots on the night, who bounced back from a recent stretch of quiet games with 32 points. “We didn’t play well enough in the first half, so when you don’t do that in this league it’s really tough to come back and win.”

Siakam, who matched a season-high with 14 free throw attempts, made a concerted effort to attack the rim and get to the line. That’s something the Raptors emphasized going in, with their previous two opponents attempting 71 free throws – 32 more than they shot. Although they had the edge over Sacramento in that department, taking 33 free throws to the Kings’ 31, they still committed too many unnecessary fouls.

Early in the second quarter, the slumping Chris Boucher picked up a pair of avoidable reach in fouls on Whiteside. A few minutes later, VanVleet hit Joseph on the arm as he hit a mid-range jumper, giving him the opportunity for a three-point play. Just before halftime, Thomas got beat off the dribble by Haliburton and fouled the Kings guard from behind as he banked in a floater.

Part of it is a by-product of the Raptors’ aggressive defensive approach, but most of it is the result of a lack of discipline – playing defence with your hands instead of your feet – or being a step slow. With a couple of injured regulars out of the lineup – OG Anunoby and Norman Powell – and with Nurse having to cycle through different and unfamiliar units, communication was also a concern, something Lowry brought up a few times after the loss.

Compounding the issue, the Raptors have used nine different starting lineups in 19 games to start the season. They’ve started six different units over the last six games alone. With injuries – Lowry, Siakam and Anunoby have each missed a couple contests, and Powell was a late scratch with a quad ailment on Friday – and underperforming players, Nurse is still searching for a group that will give him consistent production, and consistent effort.

Perhaps he found the makings of one, with the guys that nearly pulled off an unlikely late-game comeback on Friday. The Raptors better hope so, because playing 12 minutes of a 48-minute game isn’t a formula that’s going to win them many games.​