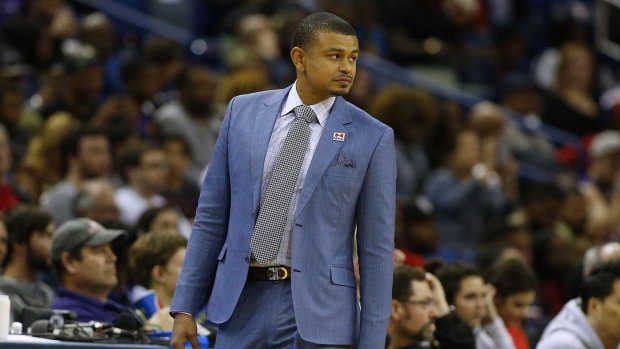 Toronto Raptors assistant coach Earl Watson released a statement Thursday responding to allegations of a history of racism and misogyny from Suns owner Robert Sarver during the time Watson was Phoenix’s head coach.

Watson said that Sarver, who is white, was upset that Golden State Warriors forward Draymond Green, who is Black, used the N-word during a game in 2016 and that the owner repeated the N-word several times when voicing his displeasure. Watson, who is Black and Hispanic, said he told Sarver he can't use that word.

Watson was the Suns' coach for parts of three seasons and was fired three games into the 2017-18 campaign.

Sarver said in a statement released Thursday after ESPN’s story surfaced saying Watson was “clearly not a credible source.”

“While there is so much that is inaccurate and misleading in this story that I hardly know where to begin, let me be clear: The N-word is not part of my vocabulary,” Sarver said. “I have never called anyone or any group of people the N-word, or referred to anyone or any group of people by that word, either verbally or in writing. I don’t use that word.”

Watson released his own statement later in the day:

“I am not interested in engaging in an ongoing battle of fact. Instead, I want to applaud the courage of the numerous players, executives, and staffers for fighting toxic environments of racial insensitivity, sexual harassment, and micro-aggressions with their truth. Basketball and 17 years in the NBA has allowed me the financial privilege to speak my truth, but we can’t forget about those who must remain silent for fear of losing their jobs. While our fortitude assists with progress, there is still more work to be done in the name of equality, and I believe that one of the strengths of our league is its ongoing commitment to justice. This has been a traumatic experience, one that has affected me profoundly, and I am not willing to relive it every day. But

I will not forget it, and I will address it more fulsomely at a point in the future when I feel ready.”

The NBA announced on Thursday that it will begin an investigation into Sarver and the Suns.

“The allegations contained in today’s ESPN article are extremely serious, and we have directed the Wachtell Lipton law firm to commence a comprehensive investigation," league executive vice-president Mike Bass said in a statement. "The NBA and WNBA remain committed to providing a respectful and inclusive workplace for all employees. Once the investigation is completed, its findings will provide the basis for any league action."
Quoting more than 70 former and current employees, Baxter Holmes's report alleged instances of racism and misogyny in the workplace and one where "employees felt they were [Sarver's] property."

Sarver has owned the Suns since 2004.