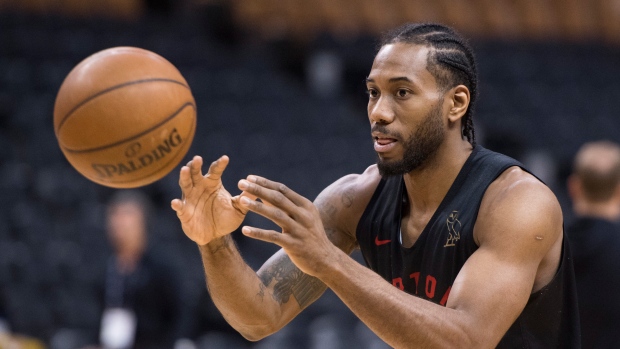 TORONTO — The Toronto Raptors are singing the praises of fans across Canada on the eve of the NBA Finals.

"There's so much excitement, passion, energy, that we're excited to get started," he told reporters gathered at Scotiabank Arena, where the Raptors will host the Golden State Warriors in Game 1 Thursday night.

Thousands of fans packed the "Jurassic Park" outdoor fan area for the deciding game of the Eastern Conference final on Saturday. Then, as the game ended, fans continued the celebration on downtown streets into the wee hours of the morning.

Raptors star Kawhi Leonard, in his first year with the team after being acquired from the San Antonio Spurs last summer, said the fan experience has been an eye-opener.

"Before you come, you know the crowd does come out when you play here on the road," Leonard said. "Now I'm here for 41 games during the regular season. You get to live in the city, see how ... guys and girls wearing hats, jerseys, how much support is really around the city."

Leonard said fan support during the playoffs in particular has been striking.

"Now in the playoffs you get to see everybody outside the arena, see how excited they are for the game. See how much support is there too," he said. "It's been an exciting year ... that's what pretty much changed for me. Just being able to see it visually."

Ujiri said the Raptors were not the only sports team to enjoy the support of Toronto fans.

"It's such an incredible city, sports city, whether you're talking about us or the (Maple) Leafs or the Blue Jays or TFC, it's a great sports city and there's room for everybody," he said.

"But it's incredible how diverse it is and we're going to continue to grow this and live this in this city ... I know this city will win ... There's something about it here and sports, it comes around. Many cities will win, and Toronto will win too."

Toronto FC won the Major League Soccer title in 2017, but the other three teams Ujiri mentioned are on championship droughts.

The Raptors have never won the NBA title, the Blue Jays' last World Series win came in 1993 and the Maple Leafs' most recent Stanley Cup parade was in 1967.

But many players on the Raptors have been to the Finals in the past. Leonard and Danny Green got there with San Antonio in 2013 and 2014.

Shooting guard Green said what makes Raptors fans unique is that their passion comes from all across Canada, not just Toronto.

"I don't want San Antonio fans to take this the wrong way, but obviously San Antonio is great — but I didn't see people jumping on top of trucks and street lights. The city went crazy and luckily no one got arrested," said Green.

Toronto police have said it's "impressive" that no one was arrested after Saturday night's historic game. Videos of the celebrations posted on social media showed Raptors fans running into intersections and dancing on top of streetcars and buses.

About a dozen cities across the country are in the process of setting up their own Jurassic Parks for fans to watch the final games.

Raptors' forward Chris Boucher told fans to "live their best life" when it comes to celebrating the team.

"Right now it's the best time for Toronto," Boucher said. "People are excited. Fans are having fun and they should keep enjoying that moment."

They'll be doing the same thing in Oakland, where Warriors fans are known for being some of the loudest in the league at Oracle Arena, during Games 3 and 4 and, if neccessary Game 6.

In Toronto, Drake will also be rooting for the Raptors on the sidelines — and sometimes from the court. The rapper has become a vocal ambassador for the team — sometimes annoying the team's opponents.

But the Warriors seemed unfazed by Drake's antics including coach Steve Kerr, who told reporters Tuesday that he's "not worried" about Drake.

"I called him on his cell phone earlier," he said, making a reference to the rapper's song "Hotline Bling."

"He's just like a regular fan — but it also just happens to be Drake," said Bell. "I don't think he's going to affect us."