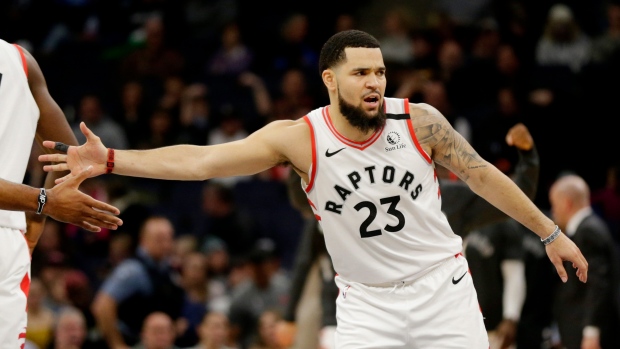 TORONTO – Next week, 22 teams and nearly 375 players will converge on Walt Disney World Resort in Orlando with the hopes of completing the NBA season amid a global pandemic and at the centre of a COVID-19 hot spot.

You can understand why some remain skeptical.

The league’s restart plan, finalized last week, is thorough and includes pages upon pages of health and safety measures intended to minimize risk on site. But there’s only so much that can be controlled.

Living conditions will be unusual, the situation unprecedented and with cases surging throughout the state of Florida – and Disney employees coming and going from the NBA campus – the threat of exposure is unavoidable.

These will be unchartered waters for everybody involved, though the defending champion Toronto Raptors are already getting acclimated to them.

While the 21 other teams participating in the restart reconvened in their home cities to prepare for training camp last week, Canada’s only NBA club was the first to fly south. With more than half of their players scattered across the United States – and facing a 14-day quarantine period if they had to cross the border – the Raptors were granted permission to hold pre-camp workouts in Fort Myers, Fla., roughly a three-hour drive from where the season will resume next month.

If they’re fortunate enough to make it back to The Finals – scheduled for October – it will mean spending almost four months away from home. However, it’s also given them a two-week head start at familiarizing themselves with the NBA’s new normal.

"It’s been different," said guard Fred VanVleet, via videoconference after his Monday morning workout. "I think that is the word I will keep using. It’s just different from the norm, from what we are used to."

"I think I’m going into it trying to get ready for Orlando, so I haven’t really noticed how weird it’s been. It’s just been different and not ideal. But these are the times that we’re in. I think us getting here was a good thing. Hopefully going forward we’ll be ready."

About 45 members of the Raptors organization traveled to Fort Myers last week, including all 17 roster players. The hotel they’re staying at had been closed to the public and was re-opened exclusively for the team.

"You have to set things in motion and we decided that this was what we were going to do and [that] it was a safe environment," said team president Masai Ujiri. "We continue to think that it’s a safe environment for us, and it has been so far."

Players and staff are tested for COVID-19 each morning. It’s become part of their daily routine. According to the NBA, 16 of the 302 player tests from June 23 – the first day of mandatory testing – came back positive, but Ujiri declined to comment on whether any of those players were members of the Raptors, leaving it up to the league to share results.

A private shuttle takes Toronto players and coaches to and from Florida Gulf Coast University, where the team is holding voluntary, individual workouts. Everybody is expected to wear a mask when they’re not in their room or on the court, and remain at the hotel, leaving only for workouts and "essential activities".

"My routine has been pretty simple," VanVleet said. "I wake up really early and get tested and check all [my] vitals and then go workout. Then I have the rest of the day to do whatever. I have been catching up on some sleep. Being a stay at home dad over the last three and a half months, I haven’t been sleeping too much, so catching up on that, playing some video games. There’s not really a whole lot to do."

Their exposure to the outside world is minimal. Still, it’s impossible to ignore what’s going on in their backyard, as the record number of coronavirus cases continues to rise throughout the state. VanVleet – who’s spent the last few months in his hometown of Rockford, Ill., – admitted he was "pretty concerned" about flying to Florida last week.

"It sounded good a month or two ago, not so much right before we got ready to leave," he said. "I think for the most part I just put the trust in the organization and understand that I don’t think they would put us in extreme risk. [I] trust the NBA. That’s where my trust lies right now. Hopefully they prove me right and not wrong."

"I’m trying to be optimistic about it. It’s not the most ideal situation but it’s kind of the times we are in. It hasn’t been an ideal year for anyone."

The shoes VanVleet wore to his workout Monday morning, which he shared on Instagram, had the names and birthdates of his two young children printed on the insoles. He already misses his family but says he’s relieved that he can assess the level of risk on the NBA campus before deciding whether they should join him in August, when players are permitted to have guests at Disney.

Several NBA players have already opted out of participating in the restart, most of them for reasons related to family. While a few of them have taken some heat, even from fellow players, VanVleet says he understands why somebody would make that choice, even if his decision was different.

"I definitely respect guys that took the stand to sit out for whatever reason," VanVleet said. "But my choice was to come play. I’m not right and they’re not wrong. It’s just a personal choice for everybody."

Ujiri didn’t have to sell anybody on playing or reassure them about the early trip to Florida. He doesn’t envision a scenario in which the NBA is forced to re-cancel the season, but he’s an optimist, to his own admission.

"I think everybody is geared up towards this and excited," the Raptors’ president said. "I think [commissioner] Adam Silver, the NBA, the players association have done an incredible job honestly. [I] have been humbled to be in a couple of the committees during this whole process and the NBA is a seriously well-oiled machine. They try their best to do everything to the best way, for the safety of the players, and they're going to try and make this whole event [and] the campus a great experience for everybody that has the opportunity to experience it. And then for people outside, everybody wants to see the game come back. We all miss sports. Sports have just been something missing in our lives. [They] make us happy [and] bring people together. I think it will help [restore] maybe some sort of happiness or some sort of joy in seeing the game back again."​