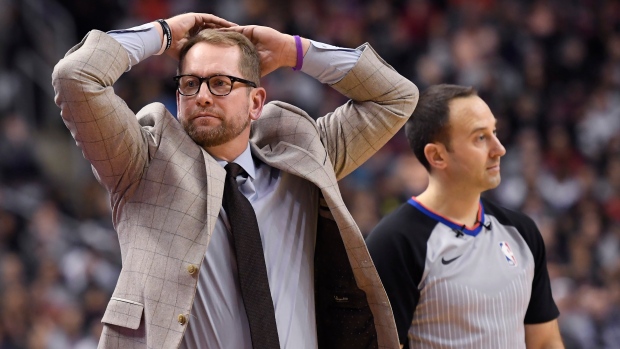 TORONTO — The Toronto Raptors were triumphant through their first nine games at Scotiabank Arena this season.

Jimmy Butler had 22 points, 13 rebounds and 12 assists Tuesday to lead the Miami Heat to a 121-110 overtime victory, that both ended the Raptors' perfect home record and their seven-game winning streak, and spoiled the return of Kyle Lowry.

"I thought (Miami) played with great energy, they were really flying around at both ends, much, much more than we were so that was kind of the first thing," Raptors coach Nick Nurse said.

"Then I thought they made really great reads out. . . they hit the right guy and that right guy made a lot of shots as well. Or they took it to the basket and made some good finishes."

Norman Powell had 23 points including two huge three-pointers late in regulation for the Raptors (15-5), and scored his team's only points on a pair of free throws in Toronto's woeful 0-for-9 overtime period.

Fred VanVleet had 19 points, Pascal Siakiam had 15 points and 12 rebounds, and Lowry finished with 12 points and 11 assists. Marc Gasol chipped in with 14 points, while Serge Ibaka added 13.

Lowry, who'd been sidelined with a fractured left thumb and decided to play just before tipoff, missed his first 11 shots Tuesday — including one from the logo to end the first half — and shot 2 for 18 on the night.

"That's terrible. That's rhythm," said Lowry, whose animated arguing at the officials was in mid-season form. "I missed shots, I didn't force anything, everything I shot came within the offence and honestly a lot of those threes went in and out.

"I haven't done basketball-type playing since New Orleans (Nov. 8) so it takes a game, but I'm sure I’ll be better next game. It's nothing to be concerned or worried about."

It was a single-digit deficit for most of the night in a game between two evenly-matched teams. The Heat led by as many as 11 points early on, but the Raptors clawed their way back and when VanVleet shimmied around Derrick Jones for a layup and free throw with seven seconds left in the third, Toronto pulled to within 83-81 with one quarter left.

Lowry finally scored on a putback for his first field goal of the game with 8:20 to play. An Ibaka free throw on Toronto's next possession had the Raptors within three points.

But Miami was putting the brakes on every Toronto drive, and five consecutive points from Canadian Kelly Olynyk had Miami up by eight with 4:51 to go.

"They are a very physical team, they're well coached and the organization is built a certain way," Lowry said. "They came out and they showed some grit tonight and we still had a chance to win the game, so you can't be mad at that."

With 1:49 to play, Powell hit his first of two monster threes. Lowry calmly sank two free throws, and then Powell's second bomb, with 43 seconds to play, put Toronto up 108-107 — and had the capacity Scotiabank Arena crowd — including former longtime Raptors guard Jose Calderon, and actor Nicholas Braun who plays Greg Hirsch in HBO's hit show "Succession" — on its feet roaring.

Butler connected on a free throw to tie the game with 38 seconds left, Siakam lost possession when he ran into a swarm of Heat defenders, then Butler missed on a shot at the buzzer to win, sending the game into extra time all tied up at 108-108.

"Just consistency, that's the biggest thing," Lowry said of Powell. "Being consistent, keeping his confidence up, staying in attack mode and shooting the shots he's getting."

Butler went to work in OT, scoring eight unanswered points in the first 55 seconds. The Raptors missed six straight shots before Powell finally scored on a pair of free throws. But Olynyk connected on a three with 29 seconds left to send fans pouring toward the exits.

"Obviously, Jimmy was pretty darn good, at that point," said Heat coach Erik Spoelstra. "He didn't have a ton of energy — at that point had already played 40 minutes, but it was like, alright, I'm just gonna make sure we seal this and this doesn't get to a second overtime, or even worse, a loss."

Olynyk finished with 16 points for the Heat. The 28-year-old from Kamloops, B.C., who was honoured with a video tribute during a timeout, said earlier in the day that his contract status will largely determine if he plays for Canada in Olympic qualifying this summer. Olynyk suffered a bone bruise in his knee while playing for Canada in August, and missed all of training camp, and said he's only now starting to round into form.

The Heat held Toronto to just 33 per cent shooting in the first quarter, and when Justise Winslow scored on a driving layup late in the quarter Miami took a nine-point lead. The visitors took a 32-23 advantage into the second.

Gasol drilled a three-pointer, slapping his thigh in celebration, that capped a 16-8 Raptors run and pulled Toronto to within a point midway through the second quarter. Miami headed into the dressing room at halftime up 58-53.

Toronto hosts the Houston Rockets on Thursday, then visit Philadelphia on Sunday before returning home to host Kawhi Leonard and the Los Angeles Clippers on Dec. 11.