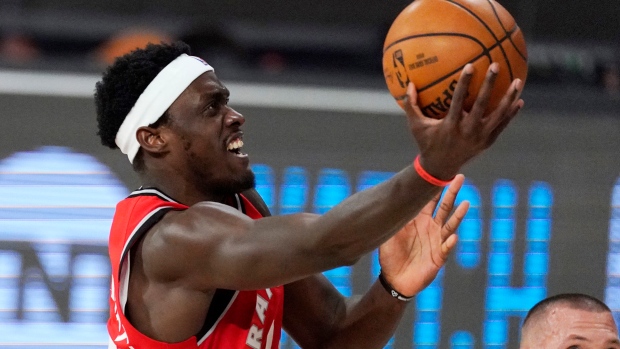 TORONTO – Pascal Siakam has felt the sting of failure before, but he knows what it takes to come out of it.

Long before his recent and very public setback made him the face of his team’s disappointing playoff exit, before he blossomed into an all-star or helped lead Toronto to an NBA title, before he won the league’s Most Improved Player award and before he was a key member of the vaunted ‘Bench Mob’, the Raptors forward had to cope with losing his job and being sent to the minors.

It was January of 2017, midway through Siakam’s rookie season. His NBA career had gotten off to a promising start. Drafted 27th overall a few months earlier, Siakam was immediately thrust into Toronto’s starting lineup after Jared Sullinger got hurt in training camp.

The Cameroon-native and New Mexico State product was intriguing but raw. He was an energy player that could impact the game with his blazing speed and active defence, but his offensive toolbox was limited and his jump shot was a work in progress, to put it mildly.

By mid-season the rest of the league had figured him out, and with aspirations of making a deep playoff run, the Raptors traded for Serge Ibaka to solidify the position. Siakam fell out of the rotation and spent most of the coming months in the NBA Development League.

At 22, it was his first real taste of professional disappointment, and he didn’t take it especially well. You could see it on his face and in his body language as he walked into or out of the locker room. He was devastated. Up until last week, it was his lowest moment as an NBA player.

“It was hard,” Siakam told TSN back in 2018. “It was really hard, especially when you’re that high, right? You’re starting and playing every night and the team depends on you, and then at some point you’re not [playing at all]. It was hard, there’s no way to sugar coat it.”

But Siakam has always been the type of person to make the most of an unfortunate situation. He went to nearby Mississauga, led Raptors 905 to a D-League championship – winning Finals MVP in the process – and then devoted that off-season to putting in the work and getting better. He’s done the same every summer since.

A decade ago, he was only starting to play basketball competitively. Three years ago, he was on the fringe of the Raptors’ rotation. Now, he’s an NBA champion, an all-star, and a maximum salary player. That’s a credit to his work ethic and the way in which he’s overcome personal and professional adversity – don’t forget that.

The big question going into his first postseason as the focal point of the Raptors’ offence: was he ready to take the next step towards superstardom? Based on his underwhelming performance, which was magnified throughout the seven-game second-round series loss to Boston, the answer is a resounding no.

However, that doesn’t mean he’ll never be ready, or that he’s not who we thought he was six months ago. This was always going to go one of two ways – he would swim, or he’d sink, but in either scenario it would allow him to accumulate those valuable reps that you can only get in real-time. Given what they have invested in him – roughly $130 million over the next four years – this was an experience that the Raptors wanted him to get, and need him to learn from, regardless of how it went.

What these past few weeks have shown us – and reminded Siakam – is that there’s still a lot of work to be done, but that’s never stopped him before.

“I think at the end of the day it’s part of being in this league and being at the level that I’m supposed to be at,” Siakam said Friday night, shortly after the Raptors were eliminated from the playoffs in a 92-87 Game 7 loss to the Celtics. “Obviously, it’s a learning experience, and a lot of people go through these moments. I just feel like it’s about responding. What response are you gonna get from it? How are you gonna take it? Are you gonna take it as a learning experience, or are you just gonna feel sorry for yourself? Because at the end of the day, nobody is gonna feel sorry for you.”

“I come from a background of always working hard and fighting my way through everything that was thrown at me, and I just feel like this is another step. It’s another step for me. I came in the league, wasn’t supposed to be here, but I fought my way here and I proved that I belong. Obviously, it’s something that I have to continue to work on.”

In the seven-game series with Boston, Siakam averaged 14.9 points on 38 per cent shooting and an abysmal 13 per cent from beyond the arc, down from his regular-season marks of 22.9 points on 45 per cent shooting and 36 per cent from long range. With Toronto’s season on the line in Games 6 and 7, he totalled just 25 points and committed eight turnovers, including several crucial giveaways in the second half of Friday’s elimination contest. He shot 10-for-31 and missed all six of his three-point attempts.

He’ll have the next few months to try and figure out what happened and, more importantly, why it happened. He never looked or felt like himself on the court in the NBA bubble. As the moment got bigger, his struggles worsened. By the end, his confidence was gone. It’s still hard to explain. He and the team have been careful not to make excuses.

Maybe it was a byproduct of the hiatus – Visa issues prevented him from travelling to the U.S. and local restrictions in Toronto kept him from accessing a gym for the first few months of the COVID-19 pandemic. Perhaps it was a result of Boston’s defensive game plan, which took him out of his comfort zone and limited his opportunities in transition. Or, more likely, maybe there were multiple factors at play – the perfect, or imperfect, storm.

Fortunately, one of Siakam’s greatest qualities – in addition to the accountably he displayed following the Game 7 loss – is his self-awareness. He’s always been able to identify areas of weakness in his game, which is the first step in turning those weaknesses into strengths – something he’s also been able to do throughout his young career.

Going into his sophomore campaign, Siakam had improved his ball-handling and passing, which helped him become a valuable member of the team’s second unit, but his jumper was still unreliable. In fact, he hit just 22 per cent of his 132 attempts from long range – one of the worst three-point shooting seasons in NBA history. In the two seasons since, he’s hit 36 per cent of his 579 three-point attempts.

Like he did then, he’ll get some guidance from the Raptors coaching staff going into this off-season. He’ll continue to work with long-time mentor Rico Hines, a player development coach with the Sacramento Kings, who hosts the famed UCLA runs with NBA stars in attendance every summer. He’s also gotten some advice from his teammates, including one who has gone through and overcome something similar.

“When we got swept by the Wizards [in 2015] I read every single article,” said veteran point guard Kyle Lowry. “I read every single thing that was said about me – good, bad, evil, terrible, awesome, and I used it as motivation, and that's what he's gonna do. That's the advice that I'm gonna give him, which is that you look at everything, you look at all these moments and you see who's saying what, because you're gonna use it as fuel. Fuel yourself, and that's what he's gonna do.”

Lowry is an interesting test case. He was 29 and, like Siakam, had just been named an all-star for the first time in his career. There were also some mitigating circumstances – he went into that series with a bad back. Still, all that mattered to most people was the result – Lowry averaged 12.3 points on 32 per cent shooting (22 per cent from three-point range) and, thanks in large part to his play, the Raptors were upset by the lower-seeded Wizards in four games. The narrative – that Lowry wasn’t a big-game player – followed him for years.

Today, the 34-year-old Lowry is a six-time all-star, arguably the greatest Raptor ever and maybe even a future hall of famer. If there was ever any doubt about his ability to rise to the occasion, that disappeared after watching him lead the Raptors to their title-clinching Game 6 win over Golden State last year, or seeing how he carried Siakam and an underperforming squad to a deciding Game 7 in this Boston series.

His advice certainly isn’t universal. Siakam isn’t wired like Lowry, few are. Not everybody has the appetite, or the time, to sit down and read all that’s been written about them.

Still, however he approaches these next few months, Siakam’s character and body of work suggest he won’t be lacking for motivation. He’s still just 26 and hasn’t even entered his prime years. In terms of basketball experience, he’s younger than most are at that age.

This isn’t the first roadblock he’s faced, even if it feels like the biggest. Through hard work and a skill set that remains one of the most unique the sport has ever seen, he’s found a way to overcome them before, and those that know him best are confident he can do it again.

“It’s part of the journey, everybody has ups and downs with their play and, unfortunately, his came at this time but it happens, it happens to everybody,” said teammate and good friend Fred VanVleet. “The future is bright for P and I know that with his work ethic and his attitude, this moment will make him that much better. I’m proud of his development and how far he’s come. We came in together and he’s continued to get better each year, so I’m excited for him to get back to work and come back a better player next year.”

“I think this is a learning experience,” Lowry said. “It's only going to make him a better basketball player, a better man, a better everything. And I would not be surprised to see him come back even [hungrier] and destroying people.”

“All the greats go through it and you have to learn from it,” said Siakam. “If you want to be considered one of the best players you have to be able to rise from these moments, and that’s something I plan to do.”​