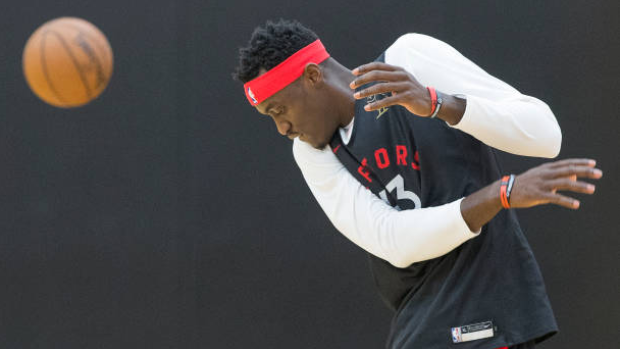 TORONTO – We’re still a long way away from the return of basketball, but the NBA – and the Toronto Raptors – took a small step forward on Friday.

As some teams begin to reopen their practice facilities in accordance with local mandates and the league’s strict guidelines, the Raptors are getting set to follow suit under even tighter restrictions.

For the first time since closing its doors on March 11 due to the COVID-19 pandemic, Toronto’s OVO Athletic Centre will be open to players on a limited basis for voluntary individual workouts starting next week.

While the NBA has permitted teams to allow up to four players in their gyms at any given time, the Raptors – working closely with local and provincial governments, infectious disease experts and public health officials – have capped it at one.

Only one player, accompanied by one coach, will be able to access the building at a time, with no overlap between groups. It’s a decision the team feels comfortable with under the circumstances – a protocol that will allow players to get back on the court in a safe and healthy way.

“I think this goes all the way back to the start of when this all began in mid-March,” Raptors general manager Bobby Webster said on a Friday conference call. “I think we've all tried to be as thoughtful and thorough as we can with every decision that we've made. So in consultation with and approval from public health and our own doctors and internal resources – we've talked to some of the infectious disease experts – I think this is where we kinda came out that we felt comfortable.

“We thought this was reasonable. We thought it allowed our guys to start moving and getting out of their apartment a little bit, and maybe more for mental health, for them to start shooting and doing things like that. I don't think it was necessarily compared to the NBA rule. I think it was more something that we developed internally.”

The league’s initial plan was to start this process at the beginning of May, but they received some pushback from teams situated in cities, states or municipalities still under a stay-at-home mandate that wouldn’t facilitate the return to work, even in a limited capacity.

One concern that came up around the association was the idea of competitive imbalance if some teams were able to open their facilities while others weren’t. However, with segments of the United States starting to loosen restrictions, the league’s worry was that players were going to flock towards unsanctioned gyms. Reopening NBA facilities would ensure players – even if it’s only some players for now – have a controlled and safe environment to workout.

Slowly, more teams are getting the green light. Cleveland, Portland and Denver are expected to be among the first to get back in their buildings, per reports. Others are hoping to reopen over the coming weeks.

Recently, Raptors president Masai Ujiri and other team officials have pushed hard to get provincial government approval, according to sources. They submitted an initial proposal that laid out their plan and some of the guidelines that would be in place.

“[It covered] everything from where the players enter, who checks their daily symptoms and temperature, what is the flow plan within the facility, what parts of the facility are open, what parts are accessible, what’s the cleaning protocol, what type of cleaning chemicals,” Webster said. “You can imagine how detailed it gets. You have those types of proposals and then there’s a back and forth as far as questions – ‘This looks good, can we have some more detail here?’ Eventually it kind of moves through.”

There are still plenty of logistical concerns that need to be ironed out.

Raptors players are scattered across North America. Nearly half the team stayed in Toronto during the pandemic, including Pascal Siakam, Serge Ibaka, Chris Boucher and Matt Thomas, among others. However, several players went home to the U.S. after their precautionary 14-day quarantine period was lifted in late March. Fred VanVleet is with his family in Rockford, IL, for instance. Norman Powell is in Las Vegas. Terence Davis is in Nashville.

That’s not limited to the Raptors, of course. Every team is facing the same issue. The difference – and it’s a big one, given current travel restrictions – is that the other 29 clubs are all located in one country. For those Raptors players in the U.S., returning to Toronto would mean crossing the border.

There’s some question as to whether or not that would be even be possible at this time. Webster said it would be handled on a case-by-case basis, depending on the immigration status of each player. Any player who does cross the border will be required to follow quarantine guidelines before they’re permitted access to the practice facility.

“That's the current rule, and we're trying to be good citizens and follow what's in place,” Webster said. “We have had the discussions, but that's where it is. We're not a special interest group and we're not someone that is looking for any exceptions. So as that rule continues to evolve, we will mirror it as well.”

As for the players that are currently in the city, Webster believes they’ve all expressed interest in working out at the facility once it’s open. The team has a call scheduled this weekend to start lining up dates and times for each player.

According to the team, players and personnel will only be permitted to use the court area of OVO Centre. All other parts of the building – including locker rooms, weight rooms, medical facilities and offices – will remain closed.

The NBA is not allowing head coaches to be present for player workouts. Once in the building, staff members will be required to wear gloves and masks at all times. Players will wear masks except for when they’re on the court. Symptom and temperate checks will be done upon entry. According to reports around the league, everyone is expected to keep at least 12 feet apart.

This step doesn’t mean the NBA is any closer to figuring out a way to salvage the season and play basketball again. If anything, it speaks to how far we are from that. Consider all these obstacles the league and its teams have to clear just to get a player or two into a gym for individual workouts. Now imagine what is standing in the way of getting a full team in the same place for a meeting or a practice, let alone everything that would go into playing an actual game.

That’s not what this is about, but it is progress.

“We discussed it thoroughly and it goes back to what I opened with: We’ve been talking daily with our doctors and specialists in this area and I think for the time being, everyone feels comfortable with where we came out,” Webster said. “This is why we erred on the conservative side of saying let’s have one player in the gym at a time, because I do think we’re all going to learn things next week and things may have to change. But we do think with this very limited opening we’re comfortable and experts are comfortable with our process and protocols in place.”​