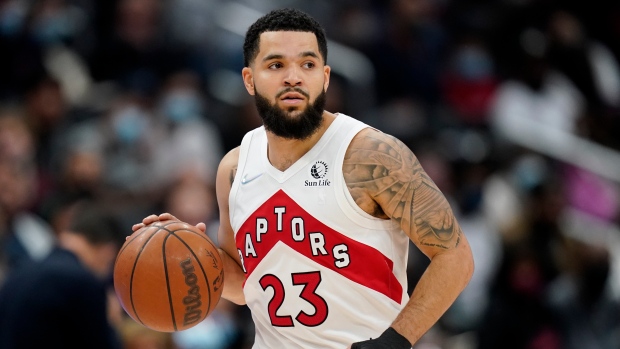 The Toronto Raptors will look to halt a two-game slide when they visit the Washington Wizards on Friday night.

The Raptors delivered an impressive win against Giannis Antetokounmpo and the Milwaukee Bucks last Saturday, but have otherwise come up empty so far on their road trip, dropping close games to the Miami Heat and surging Dallas Mavericks.

The Raptors (21-21) enter Friday's game sitting 10th in the Eastern Conference, with the Wizards (23-22) just a half game ahead in eighth place.

Catch all the action live beginning at 8 p.m. ET on TSN 4, TSN Direct, TSN.ca, and the TSN App.

Much of the conversation surrounding the Raptors of late has been on the tight rotation being employed by head coach Nick Nurse.

TSN’s Josh Lewenberg points to Nurse leaning heavily on just six of his players against Miami and Dallas, contests that the Raptors lost by a combined nine points.

Furthermore, all-star hopeful Fred VanVleet is leading the NBA in minutes and has logged 40 or more in five straight games.

However, some help is on the way.

Gary Trent Jr., who had been hampered by an ankle injury and missed six games, will return to the lineup against the Wizards.

Trent returns vs Washington tonight. Raptors were held under 100 points in 4 of the 6 games he missed with the ankle injury, averaging 97.8 over that stretch (nearly 10 fewer than their season average), so yeah, they've missed him.

Furthermore, centre Khem Birch is expected back soon after undergoing surgery for a broken nose.

Wizards forward Kyle Kuzma will not play against the Raptors as he is sidelined with a neck sprain.