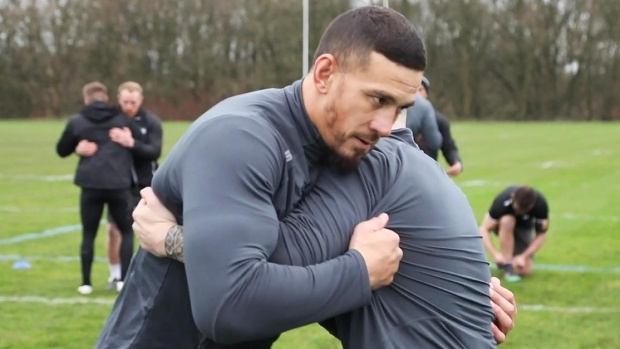 The Toronto Wolfpack step up in class Sunday when they make their Betfred Super League debut against Castleford Tigers with star signing Sonny Bill Williams expected to see action.

But the excitement surrounding the arrival of the transatlantic rugby league team in the top tier was tinged with unwelcome injury news Friday.

New Zealand forward Bodene Thompson has a calf strain and could be out three weeks. And Australian-born New Zealand international back Chase Stanley is dealing with visa issues.

That's a problem given salary cap issues have restricted McDermott's squad to 23 players. Rugby league teams dress 17, including four on the interchange bench.

"There's an elephant in the room and it's called a 23-man squad," said the coach. "Where ideally we'd like 28, maybe 29, possibly 30 players. But we haven't got that and we need to be very industrious this year with how we go about things."

McDermott, unwilling to rush his star signing, says Williams will likely come off the bench Sunday. The 34-year-old Kiwi is returning to the 13-man code after spending the last six years playing rugby union, the 15-man version of the game.

Super League is delighted to have him. Williams has been given pride of place in its season promo titled "We Play League," closing out the video.

McDermott says his team's "ambition" is to make the playoffs, achieved by a top-five finish.

"But if we're being pragmatic, especially with our squad size, I think our No. 1 objective is avoid relegation."

The bottom team in the 12-club table drops out of Super League at the end of the season. Several pundits have predicted a bottom-four finish for Toronto.

"I won't take offence that somebody has that opinion," said McDermott. "But that's certainly not our opinion."

For McDermott, the difference between Super League and the second-tier Championship, which the Wolfpack called home the last two seasons, is the quality of athlete. While Championship sides can be very good at executing plays, "the threat of being beaten athletically isn't there," he added.

The Wolfpack haven't faced Super League opposition in a competitive game since the 2018 promotion playoffs.

"For us, I think it's going to take us a few weeks before we're up to speed physically where we need to be," McDermott said. "The intensity and the tempo and the speed that Super League's played at is something we haven't faced for 12 months. And it's something that some of our boys haven't faced for a number of years now — two or three years."

"So I'm sure there's going to be an adjustment period for us. We've just got to make sure that that period where we're adjusting isn't too damaging. We need to be competitive in games and we need to keep up to speed with the opposition. If we do lose a game in the opening exchanges, we need to be in the contest at the very least before we start getting up to speed."

McDermott isn't making much of the fact that Toronto beat Castleford 16-10 in pre-season play.

"We know that the volume's going to get turned up significantly compared to our last game. I think Castleford will be a different beast from what we faced in the warmup game."

Sunday's game is part of a doubleheader at Emerald Headingley Stadium with the host Leeds Rhinos hosting Hull FC in the late game.

For McDermott, it's a return home. He spent eight seasons coaching the Rhinos, winning four Grand Finals, two Challenge Cups, a League Leaders' Shield and a World Club Challenge before being fired in July 2018.

He attended the Super League launch at Headingley just prior to the season, marking the first time he had been back since getting fired.

"It looks fantastic. It's just been redeveloped over the last 18 months," he said. "They've done a fine job of it so I'm really looking forward to going back."

McDermott's future in Toronto seems secure, having signed a five-year deal in the off-season.

The Wolfpack coach says his team is feeling the salary cap pinch because it is not eligible for certain dispensations rival teams get because it do not have an academy or access to other development paths.

The club hopes for some salary cap dispensation, to help even out the fiscal playing field.

Williams is getting a huge payday — $9 million over two seasons including an ownership stake in the club — but only 150,000 pounds ($261,500) counts against the salary cap of 2.1 million pounds ($3.66 million) this season because he is designated a marquee player. Centre Ricky Leutele, an Australian-born Samoan, is the team's other marquee player.

With Toronto replacing the relegated London Broncos, the Super League features 10 English teams plus France's Catalan Dragons and the Wolfpack.

The Dragons have signed a big name of their own, in the form of Israel Folau. The 30-year-old Australian has starred in rugby union, league and Australian Rules Football but was axed by Rugby Australia last year following homophobic comments.

Folau, a Christian, sued Rugby Australia, arguing he was a victim of religious discrimination. An undisclosed settlement was eventually reached.

The Rugby Football League, the sport's governing body in England, said it had no power to prevent Folau's signing.

"However distasteful his previous comments, we don't believe that, under our current regulatory framework, these can prevent his participation in the sport," it said. "We have sought and received reassurances from both the player and the club regarding future behaviour."

"I think Catalans have got a political decision there and a political minefield to tread to make sure that one works," he added.

This report by The Canadian Press was first published Jan. 31, 2020.