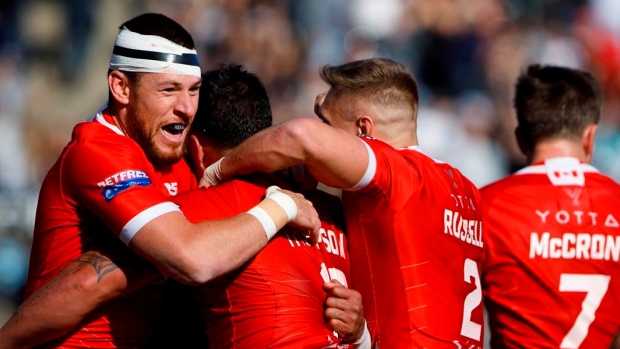 The Toronto Wolfpack's learning curve in the Betfred Super League continues Thursday with a visit to Wigan.

And with star signing Sonny Bill Williams back home in New Zealand for the birth of his fourth child, an injury to halfback Joe Mellor and continuing visa woes for New Zealand international Chase Stanley, the transatlantic rugby league team's roster is thin for its first-ever Thursday match.

With Mellor out with a hand injury for four to six weeks, Blake Wallace moves from fullback to halfback alongside captain Josh McCrone. That opens the way for Gareth O'Brien, last year's player of the year in the second-tier Championship, to reclaim his role as fullback.

Williams, 34, is expected back for the Feb. 21 game against Warrington.

Despite the Wolfpack's two losses to open the season, Toronto coach Brian McDermott sees progress and says it will take time to get used to the high level of competition in Super League.

"But I think the double-whammy for us, the added challenge for us is we're a pretty notable team," he said. "Our club has made a lot of headlines over the last two or three years.

"When London came into the competition last year, with the greatest respect to London, I'm not too sure how many Super League teams took them seriously. Yet I know for a fact every team in Super League will take us seriously, will see us as a challenge.

"We get regarded as the big-spenders of the league, which is a bit of a misnomer because, while on paper we've got a very good squad, the resource that's behind the club is limited. So we're going to face the best version of Super League opposition this year as opposed to some of the Championship teams that have entered the competition over the last five or six years."

London Broncos won promotion to Super League last year, at the expense of Toronto. The team was relegated despite a 10-19-0 record, with the Wolfpack replacing them.

McDermott has seen plenty of positives, as well as things to improve on.

The schedule-makers have not been kind to the Wolfpack, who are opening against the league's top finishers from 2019.

The Warriors were runners-up in the standings last year. Toronto has already lost to Salford (third last season) and Castleford (No. 5). Warrington (No. 4) and St. Helens (No. 1) are up next.

A look at the standings shows wins are hard to come by. After just two rounds, nine of the 12 teams in Super League already have a loss.

"We're only two games in so there's no real traits or trends to read into it at this stage. But I think it's going to be a decent competition in terms of competitiveness," said McDermott.

While the results have not get gone Toronto's way, the Wolfpack have been playing an attractive free-flowing game. Williams showed some of his trademark offloads at Salford and Gary Wheeler scored two pretty tries.

"It was as good as we've played for a long while and I include last season as well," said McDermott, whose team lost just once in 2019 in the Championship. "What we did with the ball was pretty good. And we got ourselves out of some tough situations by being creative with the ball and being pretty resourceful.

"There's an old adage — If you run at them harder than they're willing to tackle you — you're going to come up with the goods quite often. But that's not the end of the story. You've got to be a little bit creative and a little bit inventive and quite often very skilful.

"I thought we got that blend and that mix perfectly against Salford."

After two rounds, veteran Toronto forward Jon Wilkin leads in tackles with 103. Wolfpack centre Ricky Leutele is tied for second in metres made at 294 and second in tackle busts with 17. Williams is tied for the league lead in offloads with eight.

Still McDermott wants more from his defence, pointing to a lack of concentration in giving up "some pretty soft tries."

Wigan opened the season with a 16-10 win over visiting Warrington before falling 16-12 at Castleford.

In last year's playoffs, Wigan beat Salford 18-12 in the qualifying final and then was thumped 40-10 by St Helens in the semifinal. Wigan was subsequently upset 28-4 by Salford in the preliminary final.

NOTES: While Toronto and Wigan have never met before, Wolfpack coach Brian McDermott and his Warriors counterpart Adrian Lam have. The two faced off in the 2001 Grand Final with McDermott's Bradford beating Wigan 37-6 ... Wigan captain Sean O'Loughlin is one Super League appearance away from 400 in his career, all with the Warriors, while forward Joe Greenwood is on 99 appearances.