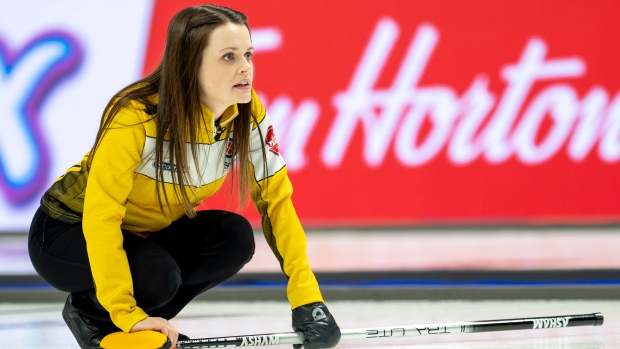 Thank you to the @abcurlseries for putting on this weekend’s event, the Sherwood Park CC for hosting and everyone who combined to make it such a wonderful bonspiel.

Fleury stole a single in the eighth and final end to secure the victory after Einarson missed a difficult runback for the win.

The 16-team field in Sherwood was stacked with notable names such as Jennifer Jones, EunJung Kim, Laura Walker, Rachel Homan and Daniela Jentsch all making the playoffs.

Jones, Walker and Homan lost in the quarters while Kim and Jentsch fell in the semis.

The triple knockout bonspiel had a total purse of $12,200.

Scotties regular Kerry Galusha doesn’t compete a lot on Tour given that she lives in Northwest Territories, but 43-year-old skip made the most of her long trip to Ontario this weekend.

Galusha, who has 18 appearances at the Canadian championship under her belt, sat out Sunday’s final at the KW Fall Classic as she was dealing with a minor injury and elected to rest up for this week’s Canadian Curling Pre-Trials Direct-Entry Event in Ottawa.

Huge thank you to Leigh for sparing today & we will be putting in the coach for our final game as our injured skipper needs some rest for Ottawa next week. Thank you for all the messages everyone! 👏 pic.twitter.com/ad8whGW2Hb

We won the KW Fall Classic! It was a hard fought game & our third game of the day but pulled out the win!

Huge thank you to @LeighPamela for sparing for us this weekend & to our coach @arcticyogi for coming in cold & playing in the final game.

Still, the Yellowknife rink of Jo-Ann Rizzo at skip, spare Leigh Armstrong at third, Sarah Koltun at second and Shona Barbour at lead made a late charge to defeat Woodstock’s Team Hollie Duncan 13-7 in the final.

Trailing 7-5 after six ends, Team Galusha put up a five-spot in the seventh end followed by a steal of three in the last end for the six-point advantage.

Julie Tippin spared for Duncan in the skip position.

Runner-up at the KW Fall Classic! Congrats @TeamGalusha on your well-deserved win after a very long day!
Huge thank you to our fifth Julie Tippin on stepping in at skip for the weekend! And playing two three-game days to boot 🥌💪🏼 #superfifth #curling pic.twitter.com/NYXgp6PCDx

Galusha and Duncan played each other in the final of the Stu Sells Oakville Tankard last weekend, with Duncan winning 7-3.

Team Galusha defeated Isabelle Ladouceur in the semifinals and Danielle Inglis in the quarterfinal.

It was an all-Scottish men’s final at the KW Fall Classic with Stirling’s Ross Whyte defeating Ross Paterson of Glasgow, 5-3.

Battle of the Wild Cards

Manitoba’s Mackenzie Zacharias and Beth Peterson represented two the three Wild Card rinks at last year’s Scotties Tournament of Hearts inside the Calgary bubble and the pair squared off in the final of the Mother Club Fall Curling Classic on Sunday.

Zacharias, 22, out of the Altona Curling Club scored deuces in the second and sixth ends for the 5-3 victory.

It was a great weekend at the Granite Curling Club coming out on top after back-to-back semis and final today 🤩 Thank you to our family, friends and most importantly our sponsors that have allowed us to travel and compete.

Kristy McDonald is returning to the elite-level curling circuit this fall after a brief hiatus and advanced to the semis at the Mother Club Fall Curling Classic, losing to Zacharias in a 9-2 rout.

Zacharias’ rink, who won gold at the 2020 World Junior Curling Championship in Russia, received a wild-card invite to last year’s unprecedented Scotties field and proceeded to finish with a 3-5 record.

Team Peterson also received a wild-card invite and qualified for the championship pool, finishing with a 7-5 showing.

On the men’s side of the draw, it was Riley Smith and his Winnipeg crew getting the better of Braden Calvert, also from Winnipeg, 6-4 in the championship game.

Another game down to last shot and we managed to steal the win in the final against @CalvertTeam. Thanks @CurlGraniteWPG for putting on the event

Smith, joined by third Nick Curtis, second Jared Hancox and lead Justin Twiss, stole a pair in the extra end to pick up the victory.

Pat Simmons, another veteran curling making a return this season, lost to Smith in the semis, 4-3.

The Remax Centre in St. John’s, Nfld., hosted the Rick Rowsell Classic over the weekend as Andrew Symonds and his rink of third Colin Thomas, second Chris Ford and lead Keith Jewer beat Ryan McNeil Lamswood in the final, 8-2.

It was the second straight year they won the event.

For the 2nd straight year, Team Crosbie are the Rick Rowsell Classic Champions. Nice game over @TeamRMLamswood in the finals tonight. Pretty special to win the event named after our friend. Thanks to the organizers for a great weekend! #hardlinenation #curling #liveeveryday pic.twitter.com/yp8qpeNh8K

Two-time provincial champion Greg Smith lost in the quarterfinal round.

On the women’s side of the draw, Mackenzie Mitchell blanked Erica Curtis, 6-0.

Lisa Weagle and John Epping qualified for the 2022 Canadian Mixed Doubles Olympic Trials after a strong performance at the Aly Jenkins Mixed Doubles Memorial this weekend in Martinsville, Saskatchewan.

Weagle and Epping defeated Jennifer Armstrong and Catlin Schneider in the semifinals, 9-6, earning the Trails spot in the process as the other semifinal featured two duos from Sweden. The Canadians faced off against Isabella and Rasmus Wrana of Stockholm later Sunday in the final, losing 8-1 after three ends.