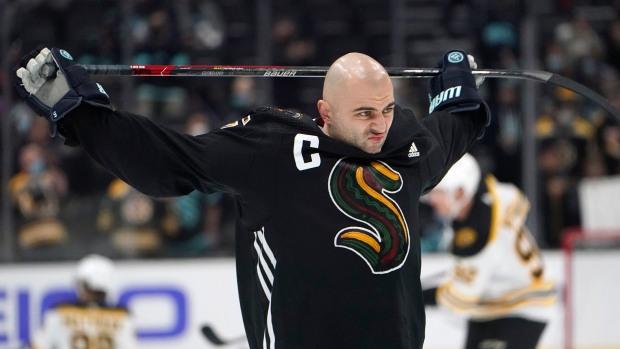 It appears Mark Giordano's time with the Seattle Kraken will be short-lived.

TSN Hockey Insider Pierre LeBrun reported Thursday that the franchise's first-ever captain is likely to be moved ahead of the trade deadline after meeting with Kraken general manager Ron Francis to discuss his future.

​"A player that now looks like he’s most definitely going to change addresses before the end of the season is Mark Giordano," LeBrun said on Insider Trading. "We told you a couple weeks ago that there was going to be a conversation between Giordano, the Seattle Kraken’s captain, and general manager Ron Francis. That chat has occurred. And what the two have decided is that Seattle will explore the trade market for their veteran captain, see what’s out there, and most likely move him.

"And in general I’m told they hope to be aggressive with all their cap space in terms of making other moves."

Earlier this month, LeBrun pointed to the Florida Panthers as one of the team's interested in the 38-year-old.

Giordano, who carries a cap hit of $6.75 million, has six goals and 23 points in 48 games with the Kraken this season.

The 38-year-old native of Toronto had spent his entire 15-year NHL career with the Calgary Flames before the Kraken selected in last summer's expansion draft. TSN's Travis Yost wrote last week on how the Flames have managed to find success this season despite losing their captain.

Giordano has amassed 149 goals and 383 assists over 997 career games in the NHL, winning the Norris Trophy in 2019 as the NHL's top defenceman.

The Kraken are second last in the Western Conference with a 16-33-5 record in their inaugural season.

The Edmonton Oilers have been long-rumoured to be in the market for a goaltender this season, but it appears they could face competition from a team currently outside of the playoff picture.

LeBrun reports New Jersey Devils are looking to acquire goaltender as their injuries have piled up at the position.

"You may remember that Jonathan Bernier went down with season-ending hip surgery in early January. And then Mackenzie Blackwood hit injured reserve in late January with a heel injury. And they don’t know if or when he will be back," LeBrun said. "So the Devils now are calling around the league with a pretty aggressive nature trying to find a goaltender for the rest of the season.

"Which of course might be of interest to the Edmonton Oilers, who are looking at goalie options."

The Devils are currently 23 points back of the Boston Bruins for the final playoff spot in the Eastern Conference. Jon Gillies has seen the majority of the team's starts since Blackwood's injury, with Nico Daws and Akira Schmid also seeing time in the crease.

Los Angeles Kings general manager Rob Blake is hoping his days as a seller at the trade deadline are over.

Blake told LeBrun in The Athletic that he has no intention of moving the team's pending unrestricted free agents ahead of the March 21 deadline. That list is headlined by former team captain Dustin Brown, who carries a $5.875 million in the final season of a eight-year contract.

“He’s been so important to this organization,” Blake said of Brown. “I’d love to see him take this team back to the playoffs. That’s important. Whatever happens after in the summer, we’ll address our UFAs then.

“Right now, I feel we need these players.”

Forward Andreas Athanasiou and defenceman Olli Maatta are also playing on expiring deals, but LeBrun doesn't expect Blake to move those players either.

Instead, LeBrun wonders whether Blake could pursue Arizona Coyotes defenceman Jakob Chychrun as he looks to improve his team in the immediate and beyond.

“Anything we look at has to have both parts: has to improve the team now and later,” Blake said.

The Kings sit third in the Pacific Division, but own just a two-point cushion over the Anaheim Ducks, who are currently outside the playoff picture.