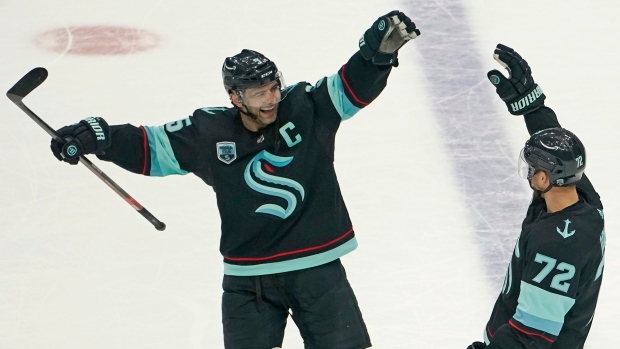 It appears Mark Giordano could be on the move for the second time in less than a year as the March 21 trade deadline approaches.

TSN Hockey Insider Pierre LeBrun reports the Seattle Kraken are expected to sit down with their captain in the coming weeks to discuss the possibility of a trade.

"Mark Giordano of the expansion Seattle Kraken is also a pending UFA, just like (Claude) Giroux. And the plan is for Kraken GM Ron Francis in the very near future to sit down face to face with Mark Giordano and discuss the future to see what Giordano wants to do," LeBrun said on Insider Trading Thursday. "He’s got a 10-team no-trade list, but the reality is I think they want to do well by Mark Giordano, who took on this commitment to be the captain of this first-year team.

"I think he ends up getting dealt and certainly there’s some contenders keeping a close eye on him – the Florida Panthers among them."

Giordano, who carries a cap hit of $6.75 million, has four goals and 18 points in 41 games with the Kraken this season.

The 38-year-old native of Toronto had spent his entire 15-year NHL career with the Calgary Flames before the Kraken selected in last summer's expansion draft.

Giordano has amassed 147 goals and 380 assists over 990 career games in the NHL, winning the Norris Trophy in 2019 as the NHL's top defenceman.

The Kraken currently sit second last in the Western Conference with a 15-28-4 record in their inaugural season.