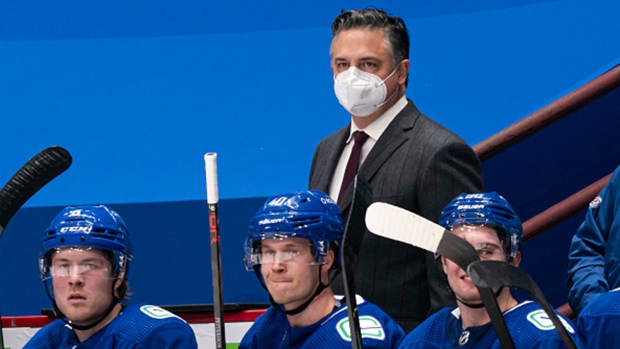 With the Canucks officially eliminated from playoff contention, speculation about the future in Vancouver is ramping up.

Despite the team still having six games to play over the next nine days – four of them against the Calgary Flames – questions are already swirling about the future of head coach Travis Green, whose contract is set to expire at the end of the season.

Green was asked about his future on Tuesday, and while he didn’t give much away about negotiations, he maintained Vancouver is where he wants to be despite a challenging 2020-21 campaign.

"I wanted to coach this team through the rebuild and get to a spot where I thought we were getting some good young pieces and had a bright future. And I want to still continue. I still have the same feeling and Jim has said the same thing, that he wants me to coach the team, and we’ll see where it goes.”

TSN Hockey Insider Darren Dreger tweets that if Green does end up a free agent this summer, he will have options.

If Travis Green becomes a free agent, similar to Rick Tocchet, Travis will have options. I sympathize with all clubs who have felt the financial crush of the pandemic, however, I’m confused by the approach on this one. https://t.co/B4RauQitOt

The Canucks’ faint postseason hopes were finally extinguished Monday night when the Canadiens picked up a point in an overtime loss to the Edmonton Oilers, giving Montreal the final playoff spot in the North Division.

“Missing the playoffs, it’s never fun," captain Bo Horvat told reporters Monday night. "That’s what you play for and that’s what you want to do every single year is get to the playoffs because anything can happen. … We’re going to learn from this experience."

The Canucks’ season was derailed by a COVID-19 outbreak that saw much of their roster contract the virus and force the team out of game action from March 24 to April 18.​

“I think every year has its own challenges. This year has had some challenges. We came into the season and you’re always hoping for some good things and you know, it hasn’t gone the way we wanted but you learn from everything,” Green said.

Still, Green maintains he’s been able to take a lot from this season.

“I think every year you coach you have an opportunity to improve as a coach and I know over the years in Vancouver I’ve improved every year and have become a better coach every season and this year is no different,” he said.

“When I look back at this season and finally it ends, I know I’ll be able to look back and say ‘You know, I’m a much better coach today than I was coming into this season.’”