Aging like a fine wine, the Perfection Line of Patrice Bergeron, Brad Marchand and David Pastrnak is once again a big story in the Stanley Cup Playoffs.

The Boston Bruins - Washington Capitals series is off to a wild start. Boston has a 2-1 lead, with all three games decided in overtime and the teams separated by a single goal.

Boston has controlled the play in most of the series, but Washington has been able to burn the Bruins on counterattacks and defensive zone mistakes – always the great equalizer – a handful of times already.

There is one part of the series that has looked rather disproportionate, and that’s in the minutes Capitals skaters have to deal with the Bergeron line. This trio has been dominant in the league for ages now, and is arguably one of the best lines in hockey again this season. 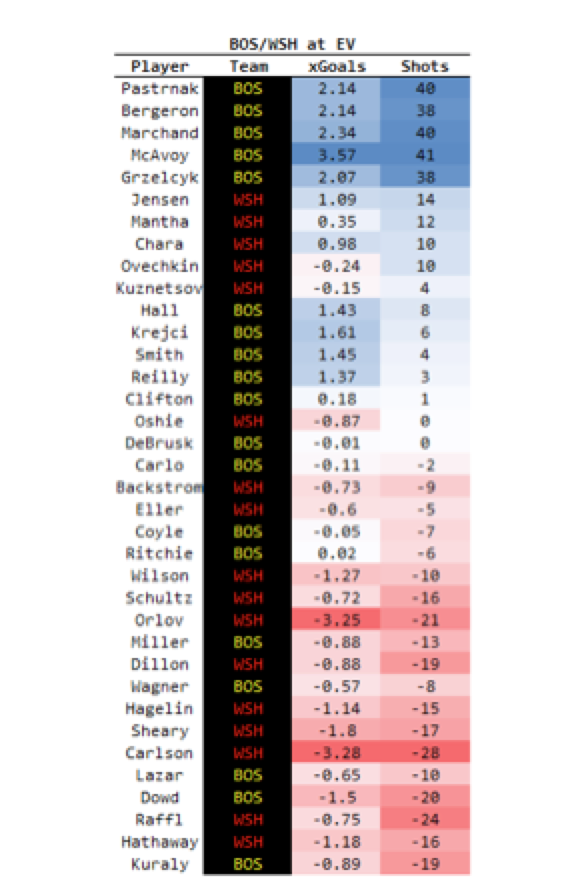 If you’ve watched the Eastern Conference playoff ringer of years past, you know this is standard operating procedure for the Bergeron line.

At their best, they hem teams into the defensive zone and keep them there, playing keep-away with the puck and creating dangerous offence from the interior. In the rare moment they do not have the puck, well, Bergeron has won the Selke Trophy four times for a reason. Put a strong defence pairing anchored by Charlie McAvoy behind them, and they are a nightmare to handle.

This is a particular challenge for a Washington team that has been more reliant on shooting talent than a possession-dominant game. The Capitals have incredible firepower, but it creates a matchup problem for head coach Peter Laviolette, knowing that whatever line he deploys against the Bergeron trio is going to have a limited amount of time with the puck.

Through the first three games, Laviolette has opted to roll most of his top-nine forwards against the Bergeron line, with no observable hard-matchup strategy. It has been a different story on the blueline, where the Capitals have made a concerted effort to get Dmitry Orlov and John Carlson out as much as possible against the Boston trio. 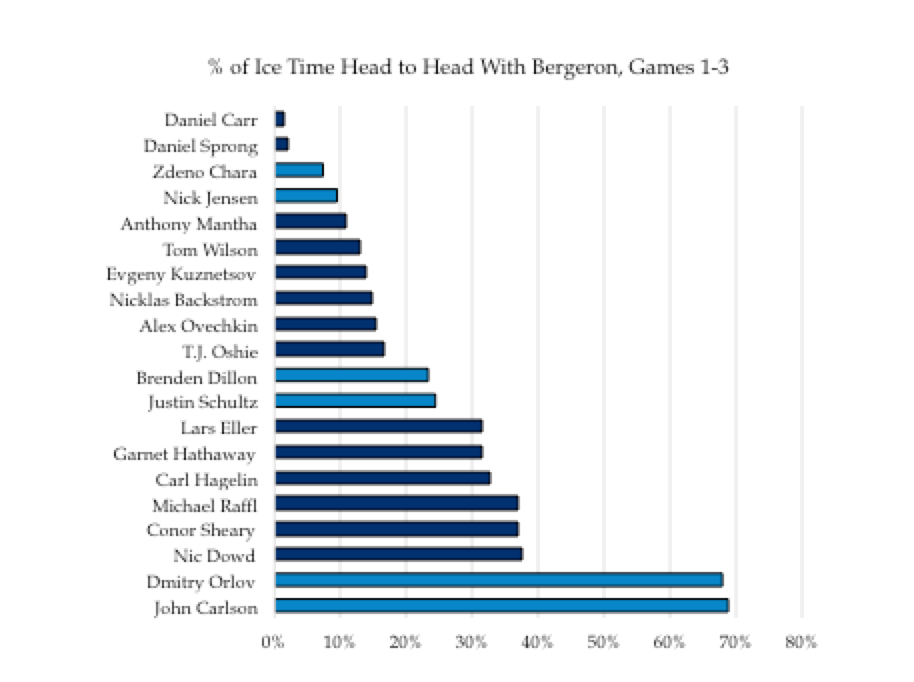 Almost 70 per cent of minutes at even strength over the first three games is rather significant; it also brings into question whether or not it’s a viable strategy for Washington. Orlov and Carlson are the team’s best pairing, and they were strong again this season, with the Capitals getting 54 per cent of the shots and 52 per cent of the goals with them on the ice this year.

But they have been deeply ineffective in (admittedly) difficult minutes so far, and it’s hard to imagine a Capitals series victory without this pairing – and the forwards in front – playing better the rest of the way.

I do think there is a question about whether or not the Orlov and Carlson pairing is worth breaking up, and for two different reasons. First, Orlov is the team’s best defender by a considerable margin, and the pairing’s defensive splits over the course of the season indicate he’s more of the driver than passenger on this pairing:

Compare that to some of the minutes played with Nick Jensen, as an example. That pairing played 118 minutes together over the course of the regular season, but were a very effective unit. More interestingly, there’s indication that Jensen could be a better partner for Orlov than Carlson right now, and that’s less a slight of Carlson as it is a complement of Jensen:

If you believe in the strategy of hard matching your best defensive pairing against the one line that’s going to beat you in this series, you have to consider making a personnel swap here. You cannot survive with your team’s best five-man units getting 40 per cent or so of the shot share over the course of a series – doubly so if your goaltending is only stopping 90 per cent of shots.

Washington is still very much in this series. But they need to find an answer for the Bergeron line, and quickly. If they don’t, that same question is going to apply for the Bruins second-round opponent.