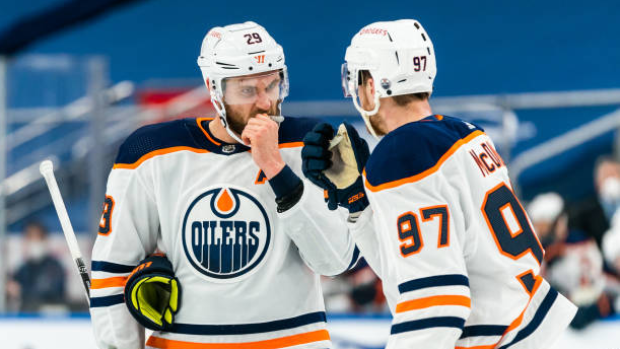 Seven questions, chapter four. We will leave the nation’s capital and their looming goaltending quagmire and head to Edmonton, another organization looking to return to the post-season after a lengthy layoff.

Few front offices were more active than the Edmonton Oilers this summer. Zach Hyman signed a 7-year, $38-million dollar contract through free agency. Defenceman Darnell Nurse was extended on an 8-year, $74-million dollar deal. The Oilers also acquired Duncan Keith’s enormous contract. Secondary cap space was used on more weaponry, like re-signing defenceman Tyson Barrie and trading for forward Warren Foegele. And it does feel like a last stand of sorts – with limited cap flexibility going forward, the Oilers will either need to deliver a winner with this group, or be forced to answer serious roster construction questions going forward.

Hyman aside, the Oilers have – intentionally or otherwise – bet on offence to deliver a contender this season. Can an all gas, all-out attack strategy work in Edmonton? That’s the most pressing question heading into next year, and I’m not sure I see a viable alternative to the playoffs for a team built in this manner.

Do not marginalize the offensive component of this roster. It is electric. And quite frankly it’s much harder to come across elite, game-breaking offensive talent than players who can slow down opposing offences. But I am absolutely fascinated by this theoretical Oilers lineup because it is rife with one-dimensional players playing with other one-dimensional players.

Let’s consider a theoretical Oilers lineup heading into next season for illustration purposes. The below shows possible five-man units and their respective offensive and defensive contributions over the last couple of seasons measured relative to their peers. (We will use Evolving Hockey’s regression based Goals Above Replacement model for comparison purposes.) 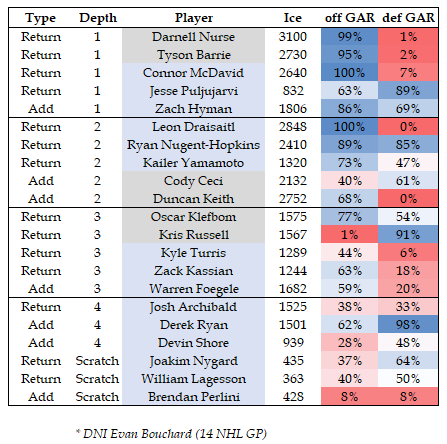 We know what this Edmonton team is – some truly gifted individual offensive players with some high upside puck movers on the back-end. We also know what this team is not. They won’t be winning very many games on the strength of their depth players, off-puck defensive play, or goaltending. Like most every team in the salary cap era, you can’t buy everything.

That said, the dichotomy within this lineup fascinates me. Consider the extremes observed even just within five-man units:

- First line, first pairing: That’s an awful lot of offensive firepower. McDavid’s scoring numbers since he entered the league are unrelenting, and he’s proven it matters not who is on his wing when he’s in the offensive zone. But the issue with the McDavid line has always been how to turn that relentless offence into a material goal advantage – defensive miscues and goaltending shortfalls have routinely muted this group’s net impact, which is why I think you will see a lot of McDavid with Jesse Puljujarvi and Zach Hyman, quality two-way forwards. I also think you will see that because for as great Darnell Nurse and Tyson Barrie are in transition and finding passing lanes in the defensive third, they can be a complete mess in front of their own net, unable to chase shooters from the slot and vulnerable to turnovers on breakouts.

- Second line, second pairing: We have seen this line in the past, and the offensive chemistry is there in spades. In about 450-minutes together, the trio has out-scored the opposition 34-to-19 (+15), and in those minutes Edmonton carried a considerable territorial advantage. But it’s likely they are going to see a lot of minutes with Duncan Keith’s pairing. Again, interesting issue here: there have been creeping concerns about Keith’s defensive play for years now, he’s going to be playing with a defender in Cody Ceci who has struggled to find his footing in any sort of top-four role, and they’ll be behind a line that features one of the most one-dimensional attackers the league has to offer in Leon Draisaitl. You don’t ever want to shorten the leash of a player like Draisaitl, but only four forwards in the league (Patrick Kane, Kyle Connor, Mark Scheifele, and Patrik Laine) conceded more expected goals on a rate-basis over the last two-seasons.

- Third line, third pairing: One caveat here is that you will surely see Evan Bouchard in this mix – the big defensive prospect the Oilers are betting on as part of their future. We don’t know much yet about Bouchard at the NHL level, but every indication is he’s primed for long-term top-four work and may be one of the Oilers best defensive options in short order. Additionally: I thought the Foegele trade was a nice upgrade and something the team desperately needed. If nothing else, Foegele plays with the type of pace and aggression that can wear opposing defences down, with limited scoring upside – the 25-year old’s career year was back in 2019-20, where he added 13-goals and 17-assists in 68-games. And yet again we are talking about a group that has failed to slow down opposing offences – a group of skaters who have played in different deployments and with different teammates, it should be pointed out.

- Depth options: Derek Ryan and Devin Shore are both capable fourth-line options and give Edmonton some flexibility for penalty kill work if they’re available.

All in, this is a decent Edmonton lineup – one that should be able to work towards a post-season berth in a weak Pacific division. But it is going to be truly captivating watching this team over the course of the regular season, and in particular against some of the better teams in the Western Conference. Does a rising tide (the brilliant Edmonton attack) lift all boats (the very many holes around this roster, most specifically a team that’s going to struggle to limit goals against all year), or will this team struggle to find its footing like last season?

One thing is certain: this season will be a referendum on Ken Holland and the broader Oilers front office’s work to build around Connor McDavid. Now we get to see what happens.