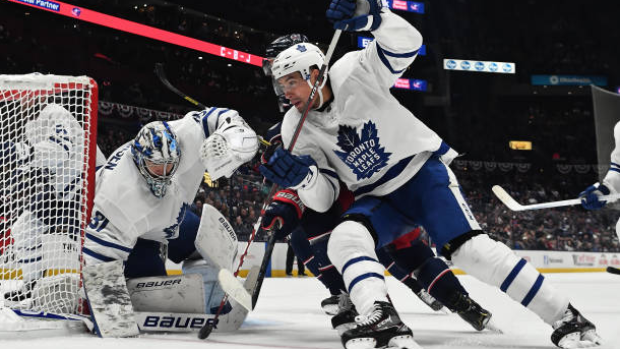 Perhaps the biggest question surrounding the Toronto Maple Leafs heading into the 2019-20 season was whether or not they could improve their defensive play – the most glaring area of weakness for one of the league’s Stanley Cup contenders.

With six games in the books, Toronto still looks to be one of the league’s better teams. But the defensive concerns persist.

There are, largely, two ways to improve a team’s presence in the defensive third. The first concerns structure and tactics.

The Maple Leafs play hyper-aggressively in the offensive zone, regularly taking gambles to create scoring opportunities for their army of skilled forwards. There is a lot less attention to a dump-and-chase style of hockey, with most Leafs forwards preferring to carry the puck in with control. With the offensive weaponry in Toronto’s stable, Mike Babcock and the rest of the coaching staff don’t have much of a choice.

Offensive strategy is just one contributor to game flow, of course, but it’s probably one of the biggest reasons the Leafs seem disproportionately out of positon, relative to their peers around the league. Toronto wants to play an up-tempo style, and understandably so.

If you are left to just conduct minor tweaks to strategy and structure in all three zones, then attention turns to personnel. This is where most of Toronto’s off-season changes were observed.

Out went Nikita Zaitsev, Ron Hainsey, Jake Gardiner, and Igor Ozhiganov – four blueliners who drew varying degrees of scorn for the team’s defensive miscues last season. But because of salary-cap pressure, Toronto had to get creative with replacing those lost bodies. Tyson Barrie was by far the biggest add via the Nazem Kadri trade, but the Maple Leafs also took a gamble on Ottawa’s Cody Ceci, and further bet on internal options – including Rasmus Sandin and Justin Holl – to stabilize the group.

With such significant change on the backend, Babcock had some decisions to make. The early season pairings have been quite consistent so far:

To the eye, performance has been ranging. Babcock has put a lot of effort into squeezing the majority of the minutes out of his top four, which has left the Holl/Sandin pairing – Martin Marincin also saw a couple of starts on the team’s third pair – to soak up a small number of shifts a game. With Sandin sent down to AHL Toronto on Monday, it’s likely Marincin will rotate back into the lineup.

The strength of the blueline is really the Jake Muzzin and Barrie pairing. They are carrying a negative goal differential as a duo through the first five games (six goals for; seven goals against), but the underlying numbers are rather encouraging, especially with consideration to limiting both shot volume and shot quality. More on that in a minute.

The pairing that has caused a fair bit of heartburn, particularly in the defensive zone, has been the Rielly and Ceci duo. Rielly, at his best, is an offensive wizard with inconsistent defensive play, which is why the Maple Leafs have historically sagged him with defensive-minded players like Hainsey (in 2017-19) and Zaitsev (2016-17). Ceci is still a young player with enough tools to be an interesting reclamation project, but his defensive play was ultimately what drove him out of Ottawa.

Through five games at even strength, Toronto grades 26th in shots conceded per 60 minutes, 25th in expected goals against, and 20th in goals against. Here is a look at how the pairings have contributed so far:

Again, some of this – emphasis on the word some – is acceptable when you play the pace and style of hockey that Toronto does. Outscoring an opponent is just as viable a winning strategy as out-defending them. But we have seen this Toronto team – especially later in the year against higher-quality opponents or in stretches where the offensive puck luck just isn’t there – victimized by their inattentiveness and structural miscues in the defensive zone.

Until proven otherwise, these pairings will be under the microscope as Toronto moves into the meat of the regular season. It starts with the Rielly and Ceci pairing, which has been caught in a number of ugly goal-scoring sequences against already this season. The duo is giving up shots and goals at a higher-than-expected rate against their peers around the league, and adjusting for shot quality doesn’t paint them in a better light.

The pairing is fresh (as is the blueline more generally) and will surely need some more time to gel, but early returns are not highly encouraging.

The Maple Leafs are deep and talented enough to outscore any sort of defensive deficiency during the regular season, but for a team that’s had a tremendous amount of trouble in the postseason, attention to detail and minimizing mistakes in front of the Toronto crease will remain a high priority all season.