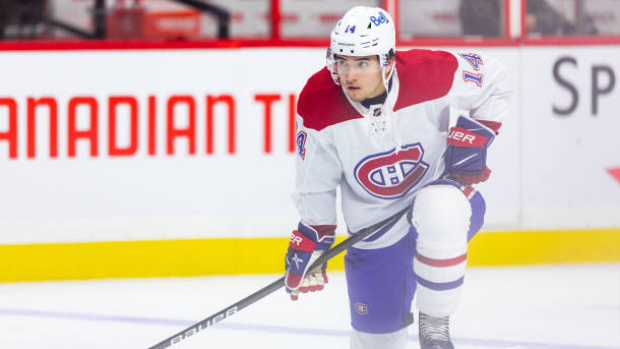 On one hand, splitting the opening pair of games in their first-round series with the Toronto Maple Leafs was a victory for the Montreal Canadiens.

The Canadiens are a very game team, but a matchup that neutralizes Montreal’s core competencies was a concern heading into the series; so too was the sheer team strength of their historic rival this season.

It’s hard to say the first two games have done much to change that math. In the midst of a series-opening split, the Canadiens’ underlying numbers have been abysmal. The team is getting just 44 per cent of the shots and 38 per cent of the expected goals at even strength; for a team that finished at 55 per cent and 51 per cent respectively over the course of the regular season, that’s a big problem.

There are two distinct challenges for the Canadiens right now. The first: the majority of the team has been deeply underwater in their respective matchups over the first two games, save for an admirable effort from the Montreal top line of Brendan Gallagher, Tomas Tatar, and Phil Danault. This line has delivered for multiple seasons but there was concern about whether they would hold up here, especially in a tough draw against the Auston Matthews line.

So far, so good on that front. It’s the rest of the lineup that has been beaten up. If we look at each player’s respective matchup in the series so far, you can see where the weakness is for Dominique Ducharme’s club: 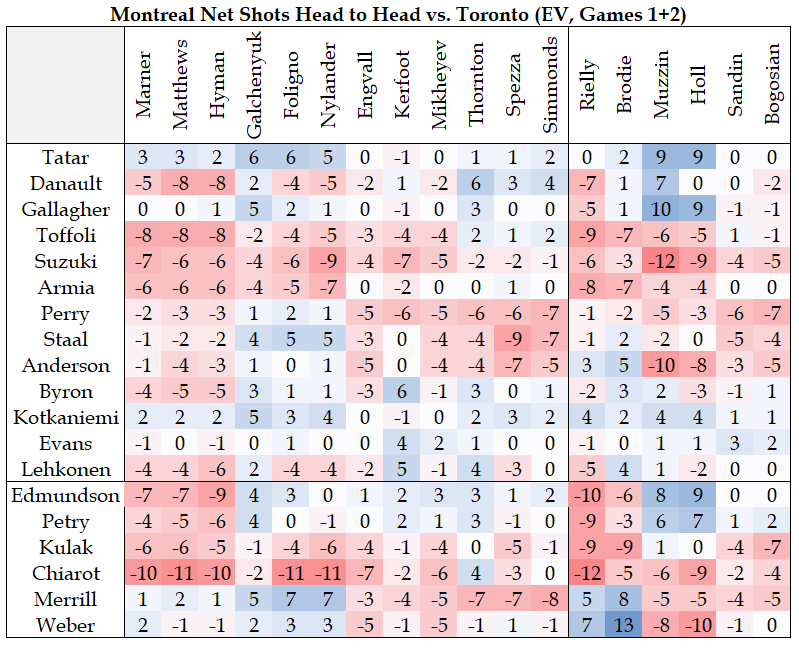 If your chief concern was the Matthews line running wild – well, that hasn’t happened quite yet. The Matthews line has managed just one goal at even strength over the first two games. The real damage is being done further down the lineup, with the Nick Suzuki line (mixed top-six competition) and the Eric Staal line (head-to-head with the Jason Spezza line) running into some trouble.

Perhaps the biggest concern for the Canadiens is on the blueline. The pairing of Brett Kulak and Ben Chiarot has struggled in every matchup so far, and they have also been on the ice for two of Toronto’s four even-strength goals. Small samples aplenty here, but this is sort of the problem with drawing in against a deeper team like Toronto – if you do have a weakness somewhere in the lineup, it’s going to be exposed.

So what does all of this head-to-head shot data really mean? Sometimes, pictures are worth a thousand words. If we take team-level data from both games and create shot profiles at even strength, we see how territorially one-sided this has been – the Maple Leafs getting much more volume, and also more effective at pushing into dangerous scoring areas of the interior and between the circles (via NaturalStatTrick): 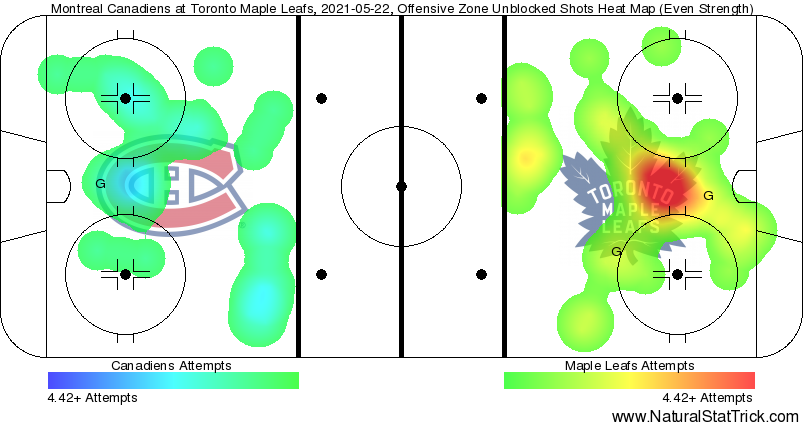 Why are the even-strength numbers so important? Matchups aside, that’s where Montreal’s competitive advantage has been, and that’s true spanning multiple years at this point. Look at the 2020-21 regular season as a reference point on this: 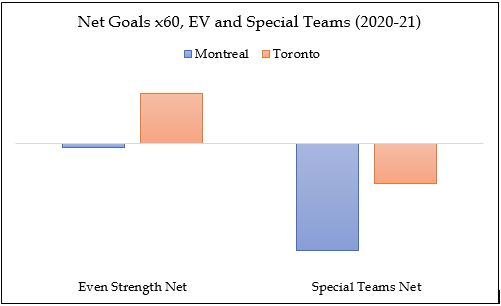 The Canadiens did have success counterattacking on penalty kills all season, but that’s never something you want to hang your hat on, especially when your penalty killing unit was 25th in the league in suppressing goal-scoring. (Interestingly, remember Toronto’s unstoppable power play from the first half of the season? That appears to have cooled off considerably.)

Bringing this back for Game 3 perspective, I think it’s critical that Montreal’s middle-six forwards show some life over the remainder of the series. The Canadiens top line is in a daunting matchup and faring admirably, but if we know one thing about Matthews this season, banking of getting the better of him is a fool’s bet long-term.

The Canadiens need to win further down the lineup. So far, it hasn’t happened. Keep an eye on Ducharme heading into the pair of home-ice games where he will be able to control matchups more aggressively. It’s likely we will see the line blender go to work on the forward group and the Kulak-Chiarot pairing if this trend continues.