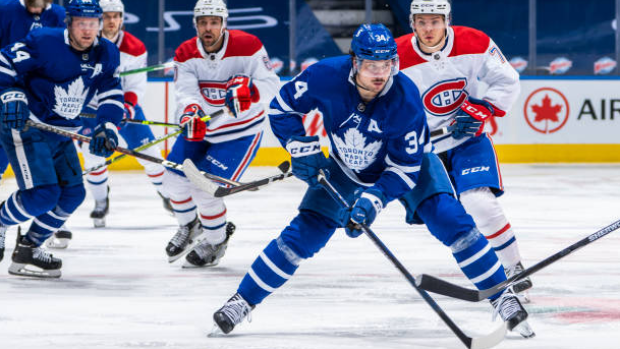 What will the Montreal Canadiens do against the Auston Matthews line?

In many ways, it resembles the question for the Winnipeg Jets and their Connor McDavid problem. Matthews torched the North Division all season long, his remarkable 41 goals giving him an easy path to his first Rocket Richard Trophy.

The Canadiens dealt with the Maple Leafs 10 times this year, spanning two different head coaches in Claude Julien and Dominique Ducharme. Montreal won just three of those games, and were 11 goals in the red in the process.

Distressingly in the case of this matchup, the Canadiens, whose core strength remains their ability to control the pace of play at even strength – the team was second in the National Hockey League in shot differential this year (54.3 per cent Corsi%) – were seven goals worse than the Maple Leafs over 500 minutes played.

The Matthews line in particular gave the Canadiens problems. The teams traded shots with Matthews on the ice, but expected goals and actual goals came in substantially higher at even strength: 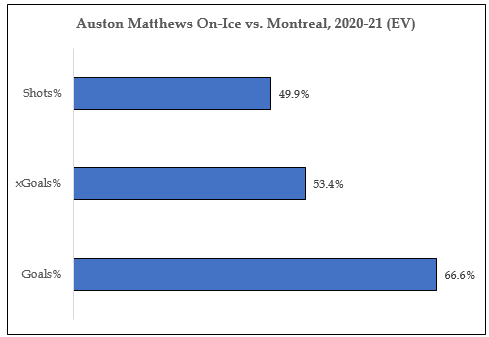 One of the challenges with Matthews – and his line more broadly – is they tend to not only generate heavy offensive volume, but also have the requisite shooters to turn those scoring chances into goals. It’s a deadly combination and one of the biggest reasons the Maple Leafs were tied for third in the league when it came to even-strength scoring (3.0 goals per 60 minutes of play).

If you look at Toronto’s offensive shot profile with Matthews on the ice (HockeyViz), it’s easy to see why they were so electric. The low slot and areas between the circles were ripe for shooting opportunities, with common wingers like Mitch Marner and Zach Hyman playmaking all over the ice – a powder keg when you have a player with Matthews’ shooting talent: 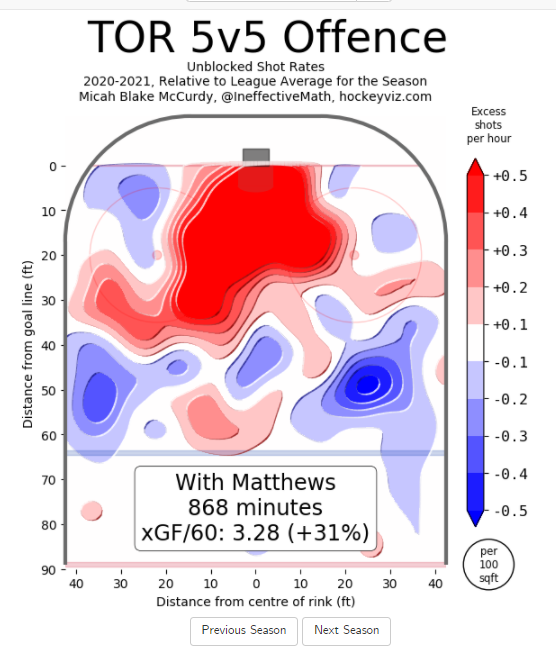 Looking at the regular-season series data, it’s clear the Canadiens endeavoured to do two things: keep the third pairing away from the Toronto top line as much as practical, and get the Phillip Danault line out against Matthews as much as possible. Danault anchors a critical Canadiens line, and he’s generally armed with wingers Brendan Gallagher and Tomas Tatar. 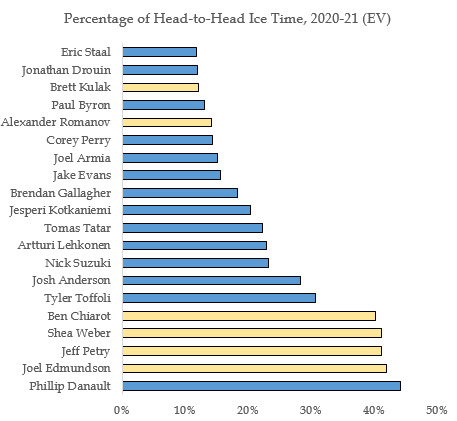 Both Danault and Gallagher were full participants in practice on Saturday, and should be ready to draw in for Game 1. This group may not be the most effective at slowing down a player the calibre of Matthews (and really, who is?), but it’s perhaps the best personnel grouping the Canadiens have for that line of work. On a good day, that line can turbo-charge itself into extended offensive zone shifts with heavy cycling and board work, which at least should take some meaningful puck possession time away from the Matthews line.

From a defensive standpoint, the Canadiens certainly have questions. Shea Weber was noticeably absent from practice over the weekend, but reports indicate he will be ready to play the opener. That’s good news for a Montreal team that desperately needs two capable pairings to throw at the vaunted Toronto attack.

Ultimately the Montreal coaching staff is going to need a lionhearted effort across the board, with extreme emphasis on limiting Toronto’s attack to one-and-done scenarios. The Canadiens are a very game and talented team, but they drew into a very difficult matchup against one of the deadliest even- strength teams in the league.

But if we know one thing about this series, it’s that Montreal won’t be backing down anytime soon.