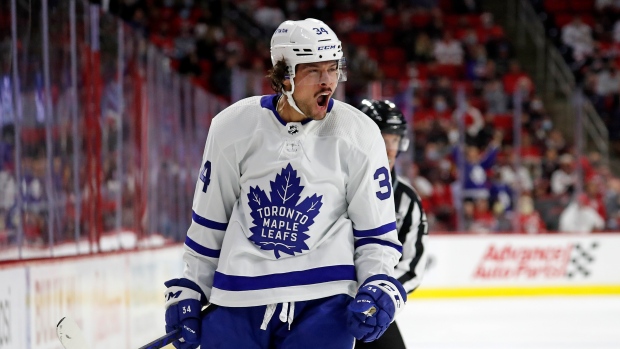 Here’s an early regular-season trend in the National Hockey League: teams with punchless offences are losing. A lot.

The old adage that defence wins championships isn’t going away any time soon. Despite the modernization of attacking styles and schematics, and, more generally, looser officiating across the four major leagues, we see defensive competency factoring in the outcome of games time and time again. Just last season, the Montreal Canadiens parlayed fantastic defence and goaltending into a Stanley Cup Final appearance.

Despite that run, the NHL continues to see the same paradigm shift as other major sports leagues. The teams that are generating offence at a blistering rate – irrespective of core competencies anywhere else on the ice – are winning games. The teams that can’t find a way to the opposition’s net continue to lose.

To illustrate just how seismic a shift this has been for the NHL, let’s compare the first month of this regular season to the 2011-12 season – the year where the defensively dominant Los Angeles Kings stampeded through the postseason en route to the Stanley Cup.

Pay particular attention to how expected goal rates (both offensively and defensively) correlated with a team’s actual goal differential at even strength.

First, the correlations from 10 years ago: 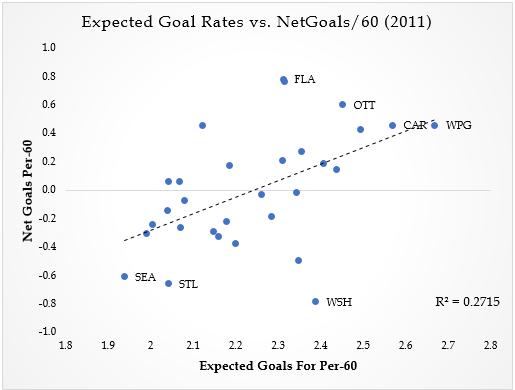 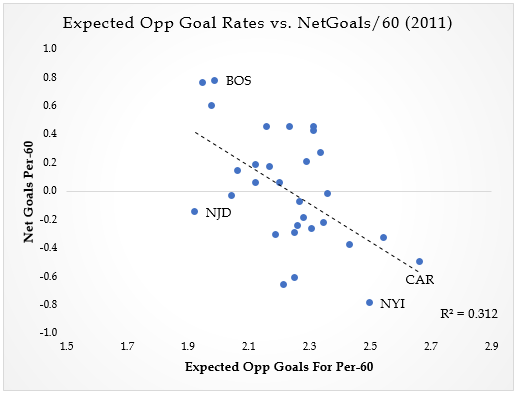 Let’s zoom in on the 2021-22 season now. Caveats of smaller sample sizes apply here – that said, note the differences on both fronts: 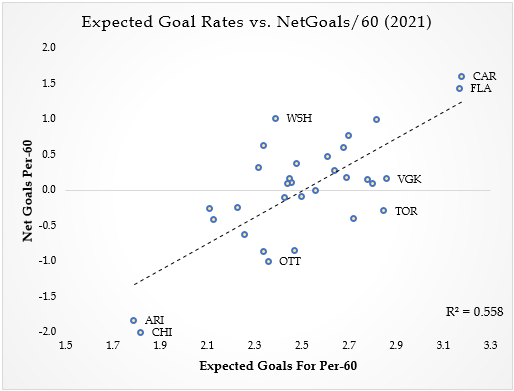 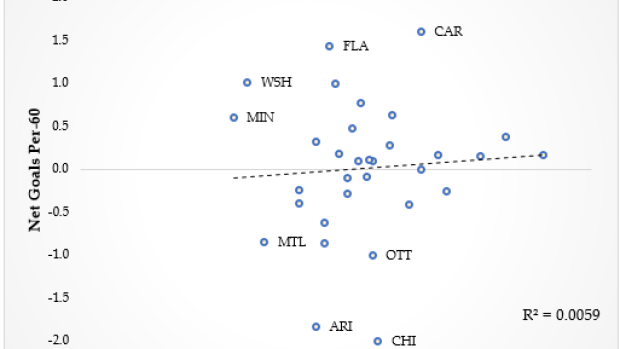 Put plainly once more: the great offensive teams this regular season are bludgeoning their opponents, and the correlation between great offensive teams and their ability to drive big goal differentials has significantly strengthened over time. Offsetting that? A team’s ability to limit opponent shot volumes (and the danger of those shots) has meant very little for a team’s ability to drive goal differential. In fact, through the first month of the season, no relationship exists.

By way of example, consider the two extremes. The Vegas Golden Knights concede more expected goals than any team in the league and they are green in goal differential, whereas the Boston Bruins (the third best defensive team at even strength) are four goals underwater. 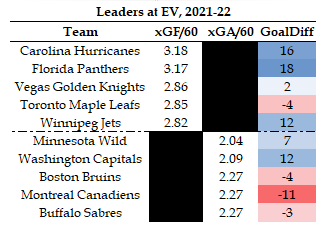 Now let’s reverse it by looking at the weakest offensive teams and weakest defensive teams: 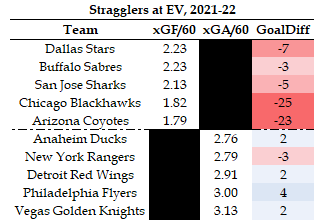 The relationship breaks down meaningfully. Four of the league’s five leakiest defensive teams are still outscoring their opponents, but more notably, the teams that cannot generate offence are getting crushed to open the year.

There are any number of explanations for this shift. I mentioned earlier that the league – like other leagues – have gradually shifted towards a rules structure that incentivizes scoring, like reducing the size of goaltending equipment.

Front offices have also started to hunt for more dynamic offensive players through the draft, trading in hulking size and off-puck play for pace and scoring touch. And coaches have tailored at least some of their strategy towards chasing more goals: four-forward power-play deployments are extremely common, while fourth lines rife with goons are not.

It will be fascinating to see whether this trend sustains itself over the full season. Goaltending performance – or lack thereof – can have a dramatic impact on team defensive performance and corresponding goal differential, and we have seen rather volatile performance here through the first month of the season.

But right now, offence is reigning supreme. And if you can’t score in this era? Good luck says the data.