The National Hockey League is experiencing an offensive renaissance. Goaltenders are struggling as offences are scoring at levels not seen in decades, and it’s not stemming from an increase in power-play opportunities.

This evolution has drawn a lot of attention in recent weeks, with most wondering when it would taper. After all, we are talking about a league that’s been notoriously low-scoring and goaltender-dominated for years.

We are also talking about the regular season, where most teams play a conservative brand of hockey, more willing to chase three-point games than aggressive regulation wins. So, each year we’re used to watching a short-term increase in offensive production give way to a very defensive, entrenched style of hockey as playoff races tighten.

Most of the high-end offensive teams are dominating possession time and the shot clock. Consequently, offensive metrics like shot volumes and expected goal volumes are correlating stronger with wins and losses than ever before: 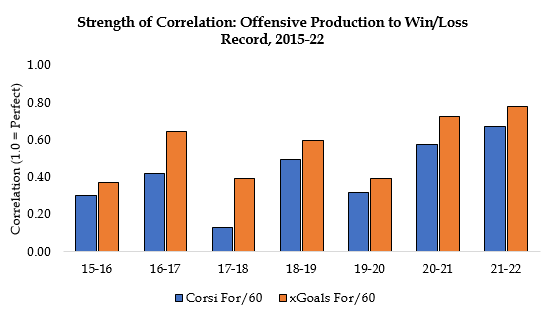 We have known for some time that teams that possess the puck, win the shot clock, and generate their shots from dangerous areas of the offensive zone are generally playoff contenders. What’s interesting is the strength of that relationship is increasing with time. Teams this season (and one could argue the past two seasons, though temporary divisional realignment due to the COVID-19 outbreak muddies the water some) are increasingly differentiating themselves through their offensive prowess.

This relationship is so significant that it has superseded other, more obvious relationships. What if I told you expected goals had a tighter correlation with win-loss record this year than either of shooting percentage or save percentage, both of which are affixed to actual goals scored? That’s precisely where we are: 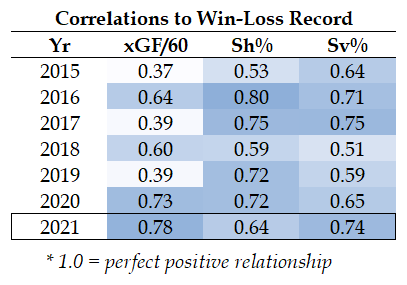 What we have observed all season long – great offensive teams seemingly turning everyone into dust – is showing up in the data now. What’s most interesting is how this data shapes our understanding of the playoff landscape.

We know recent results matter. Injuries, roster moves leading up to the trade deadline, player development, and even broader organizational changes can help or hurt a team over the course of the season. What we have grown accustomed to over the years when building our playoff primers is scrutinizing more recent performance, which tends to be a strong predictor of future postseason performance. (Who would compare Dave Tippett’s Edmonton Oilers to the Oilers team we are watching right now?)

Let’s look at the last 25 games for our playoff contenders, and for the purpose of apples-to-apples comparisons, we will focus on even-strength expected goals only. Here’s how each team has ranked, relative to the rest of the league:

For most teams, split-season performance has been very similar. Florida, Carolina, Calgary, and Toronto have been top-five offensive teams all season long. Each team has gone through intermittent offensive slumps, but generally, those were shooting percentage-driven and would correct a short time later. They also reaffirm the trend. Thirteen of the top sixteen teams in expected goals over the last 25 games are in the playoff race, and only the Winnipeg Jets (eighth) qualify as an outlier.

But, as usual, the Western Conference is the more intriguing battleground right now. The Los Angeles Kings, for example, have seen a considerable step back in the volume of offensive pressure they generate. And because the offence is less threatening – fewer shots, and those shots coming from distances now – they have seen the offence slump considerably. Only the Sharks and Ottawa Senators have scored fewer goals over the same period.

That’s opened the door some for a chasing Vegas Golden Knights team, but it’s also ensured the Central Division will send five playoff teams, including the surging Dallas Stars.

Dallas hasn’t seen all this newfound offensive pressure turn into a tidal wave of goals quite yet, but you should keep an eye on them as we head into the first round.

Teams that generate a ton of chances in succession tend to go one of two ways: they either stop generating the same degree of chances, or a waterfall of goals is around the corner. If you’re a future Stars opponent, hope for the former!