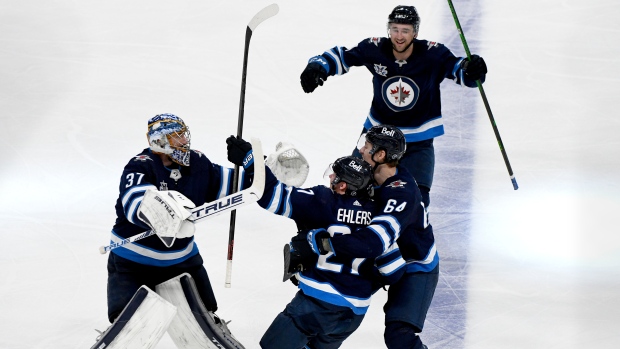 An awful lot of time has been spent dissecting the Edmonton Oilers after a ghastly four-game sweep – a four-game sweep in which they were a clear series favorite (about 65 per cent implied probability of winning the series at most sportsbooks). The Connor McDavid line couldn’t break-even in goals, and relying on the Oilers' depth over any period of time has been a losing bet. It will be a long summer in Edmonton.

On the other side of the coin: how about Winnipeg! For a team that finished third in a very average division – nine points and thirteen goals worse than the Oilers, for frame of reference – that was an impressive victory. And not lost on me was Connor Hellebuyck’s 95.0 save percentage against an Oilers attack that couldn’t be slowed down all year.

The Jets certainly have the personnel up front to compete with high-end teams around the league, but the Winnipeg story – true for a few seasons now – starts with goaltender Hellebuyck. He is the ultimate equalizer, a perennial Vezina Trophy consideration at this point in his career and the single most important player for the Jets organization.

It wasn’t long ago the Jets were mired in goaltending woes. From 2007 to 2015, the era pre-Hellebuyck era, stopping pucks was a challenge. The Thrashers before the move (2007-10) were getting a dismal 90.3 stop rate in all situations (26th); the Jets after the move (2011-15) didn’t fare much better, stopping 90.6 per cent of shots. From Chris Mason, to Johan Hedberg, to Ondrej Pavelec, to Al Montoya – well, it was mostly all bad.

Since Hellebuyck entered the league, Winnipeg’s fate has changed. The team eased him into service in his first two professional seasons, and since then it’s been sustained dominance: 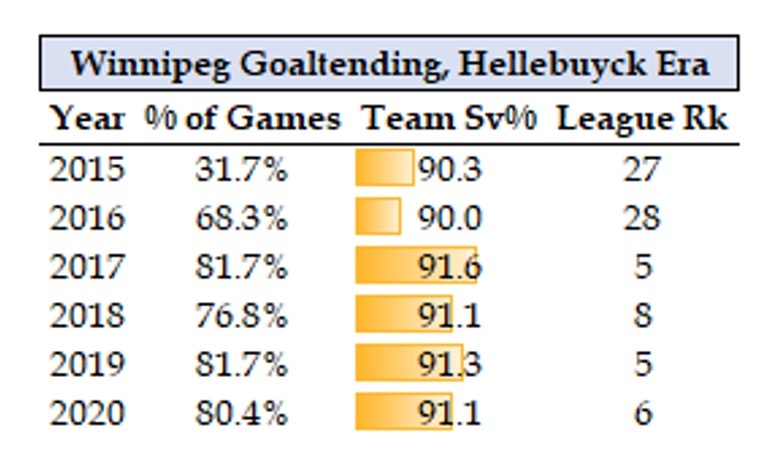 One of the interesting components underlying those gaudy year-over-year save percentages: Hellebuyck’s workload has been increasingly more difficult. As the Jets entered a transitory part of their roster-building (highlighted by the gutting of their blue-line), teams were much more effective at generating big shot volumes against the Jets and from dangerous areas of the ice.

If we overlay those shot volumes and expected goals against one another, you can see how much more difficult Hellebuyck’s job has become. You are also amazed at how he’s been able to sustain his Vezina-type performance amidst these challenges: 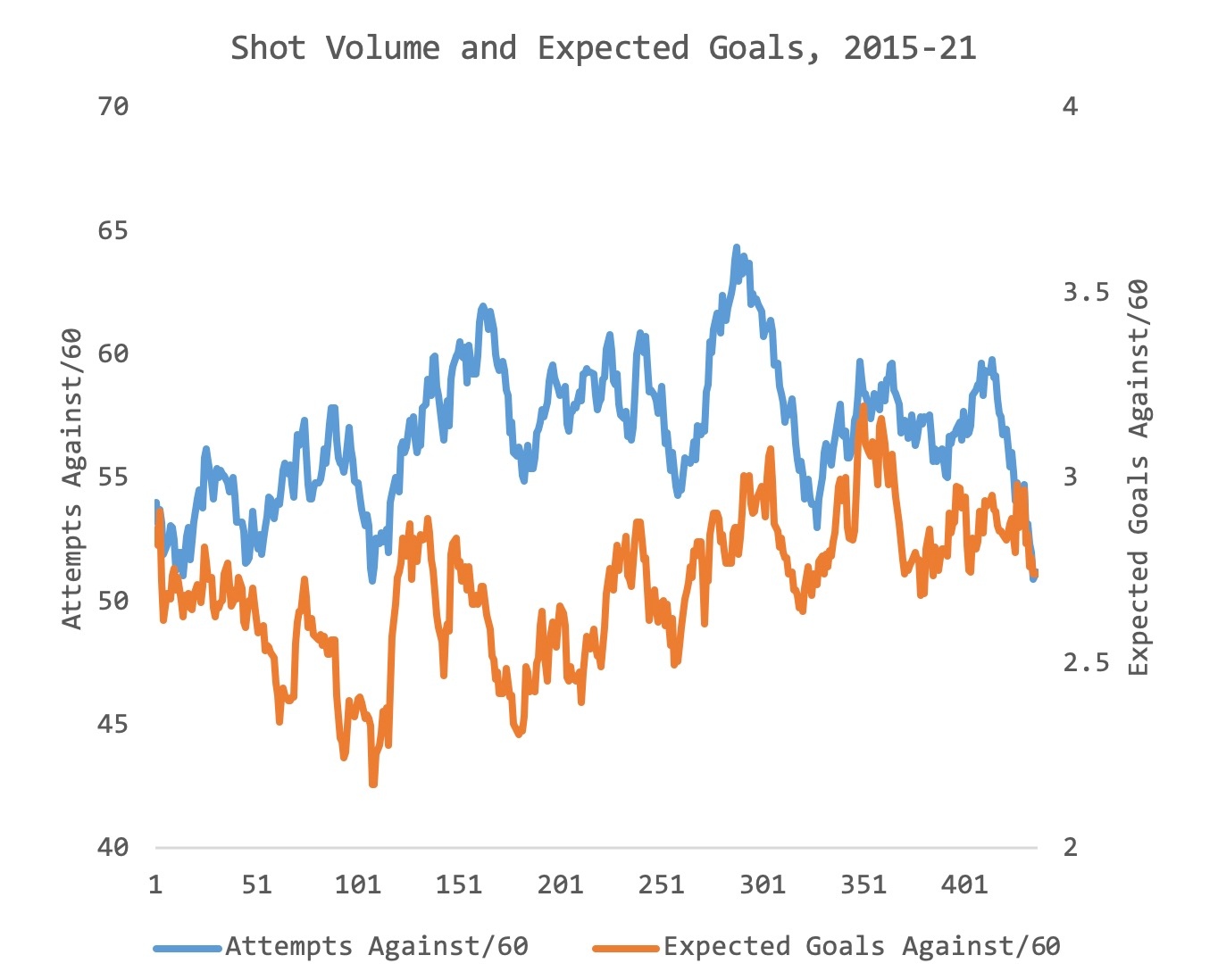 The Jets improved a bit defensively this season (and it’s part of the reason why they finished 16 goals above average on the year), but otherwise this has been a multi-year negative trend that has pushed the Jets as a franchise towards the middle-of-the-pack in performance.

Even through some marginally improving defensive measurements, the Jets still have a whale of a time pushing shooters from outside of the low-slot, perhaps the most dangerous scoring area of the ice. 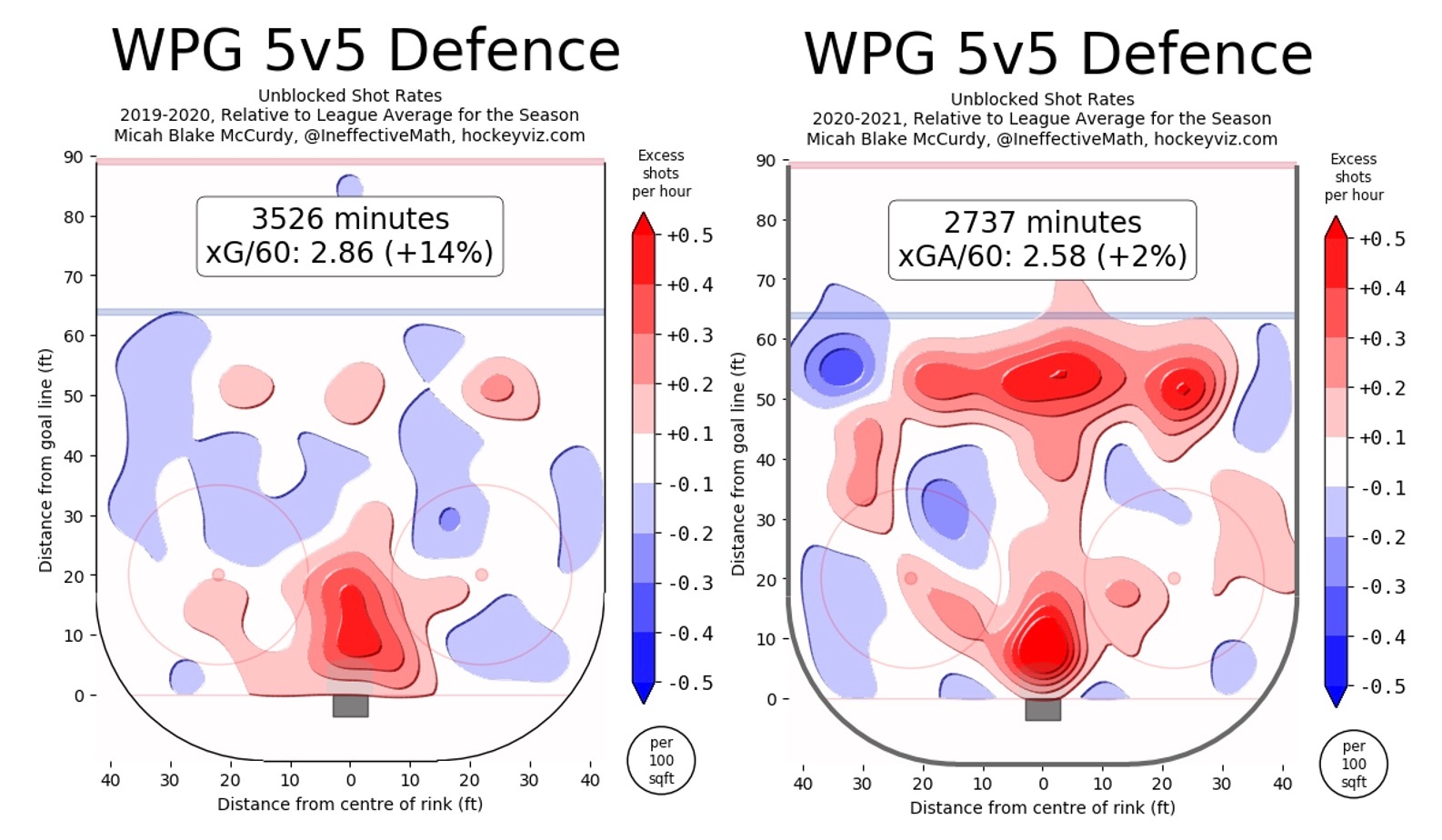 This sort of stuff makes Hellebuyck’s job a nightmare, but when he’s on his game, the Jets are going to be a difficult out for anyone. Nothing can frustrate a team – especially a playoff team – like a goaltender who seems impenetrable, and that’s been Hellebuyck over most of his career. Couple that with the fact that the Jets do have considerable weaponry in front – Mark Scheifele, Kyle Connor, Blake Wheeler, and Nikolaj Ehlers all had big years and finished in the top-fifty in scoring.

And that’s a scary proposition if you are the Toronto Maple Leafs or Montreal Canadiens as we await the winner of the other North division match-up. Winnipeg may not have the hallmarks of a Stanley Cup contender, but they do have the most critical piece on the roster, and it gives them a competitive advantage in the goaltending department irrespective of who they play the rest of the way.