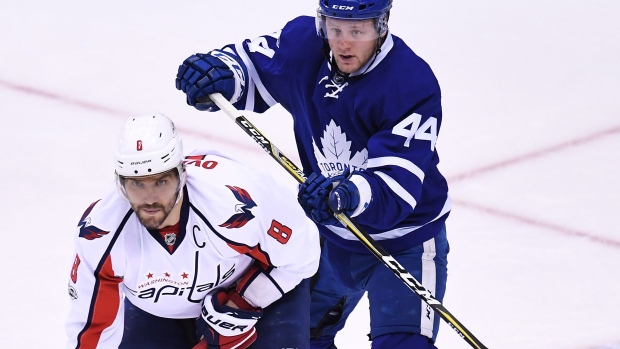 Rielly and Ovechkin , The Canadian Press

On Tuesday, Capitals head coach Barry Trotz took the blame for Ovechkin not playing more in the overtime loss and said he'd give him more time on ice moving forward.

"That's on me to get him more ice time," Trotz told TSN's Mark Masters. "I can get those (minutes) up"

Ovechkin scored his second goal of the series in the first period of Game 3, but according to Isabelle Khurshudyan‏ of the Washington Post, he spent just 4:13 on the ice during the third period.

The Capitals opened overtime on the penalty kill, and Toronto scored while a man up, leaving Ovechkin (who doesn't play on the PK) on the bench for the brief sudden death frame.

Ovechkin logged 19:52 of ice time of Game 1 and 24:35 of ice time in Saturday's double-overtime thriller.

Trotz said the Capitals will play there best game on Wednesday in Game 4.