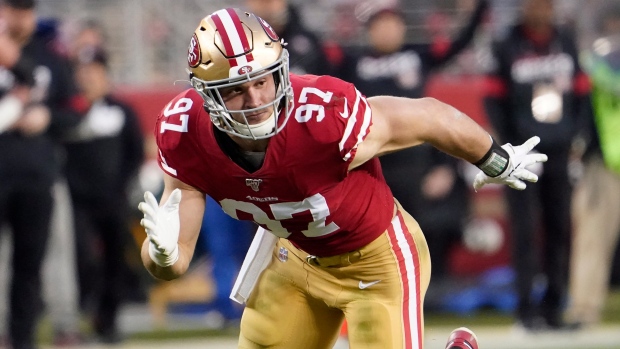 This year, we’re going to take a look at the Super Bowl and divisional odds for all 32 teams, and dive into one storyline that we’re keeping our eye on.

In this NFC West preview we’ll look at the San Francisco 49ers’ Super Bowl odds, Matt Stafford’s MVP chances, why taking the under on Seattle might be the play this season and whether Kyler Murray could go under his season rushing prop for the first time in his career.

The San Francisco 49ers were a Jimmy Garoppolo pass away from winning the Super Bowl two seasons ago. And at +1400 I think they could be right back in that position this season. Injuries absolutely decimated this team last season. Name any key player on this roster, and I can assure you that he missed a chunk of time. The 49ers led the league with 326 total man games lost to injury. The next closest team (Philadelphia) trailed by 55 games at 271. The good news heading into the season is that everyone is back. A healthier offensive line should help the running game after it took a step back last season, and running Raheem Mostert returns to the lineup after he played just eight games last year. Their pass catchers are elite with George Kittle leading the way, while the likes of Deebo Samuel and Brandon Aiyuk have shown the ability to be game breakers. This offence is loaded, and the Niners just need to figure out who their quarterback is. The defence, which was one of the best in 2019 and fell to the middle of the pack in 2020, gets DEs Nick Bosa and Dee Ford back in the lineup. Add in some new faces at offensive and defensive co-ordinators and you have the recipe for success. The 49ers will also benefit from their poor record last season and will play a fourth-place schedule. I love everything about this team, over 10.5 wins, +190 to win the division and roll the dice on them coming out the NFC and winning the Super Bowl at +1400.

Is it possible that taking someone at +1800 to win MVP feels too chalky? That’s kind of how I feel making this Stafford selection. The 33-year-old has finally gotten out of the purgatory that is the Detroit Lions organization. Now, Stafford takes over a Los Angeles Rams offence that has been a good quarterback away from really unlocking its full potential. Stafford will have plenty of chances to spread the wealth and rely on his support group with weapons like Robert Woods, Cooper Kupp, Van Jefferson and Tyler Higbee. While the loss of running back Cam Akers will surely hurt the team’s chances of having a more balanced attack on offence, the injury could put even more on Stafford’s plate. If he’s able to deliver, it could be a driving factor in him winning MVP. We’ve all seen the type of offence head coach Sean McVay wants to deploy, and in recent years Jared Goff just wasn’t good enough to get the job done. Yes, Stafford has a losing record in the league, and yes he’s battled injuries a lot in recent years. But he comes to play week after week. The quarterback has started all 16 games in a season nine times in the last 10 years. A change of scenery could be exactly what he needs to finally put his name alongside some of the top quarterbacks in this league and give him a chance at taking home MVP. I am definitely giving this a lot of thought at the price of 18-1.

Take a look at this Seattle Seahawks schedule, it’s not very friendly. Seattle opens the season by playing three of its first four games on the road. Those games come in Indianapolis, Minnesota and San Francisco. After that, the Seahawks are home to the Rams, travel to Pittsburgh and then host the New Orleans Saints. I won’t go through the entire schedule, but trust me when I say it doesn't get much easier from there. Teams in this NFC West will have to scratch and claw for every win possible within the division, and Seattle - after winning the division last year - will also have to deal with playing a first-place schedule. A number of things concern me about this roster. After scoring at least 27 points in its opening eight games last season, Seattle managed to reach that number just twice in the second half of the year, with one of those coming in a 40-3 blowout win over the New York Jets. Meanwhile, the defence gave up the second-most passing yards in 2020 and the Seahawks have not done a good enough job improving that unit this offseason. I think getting to 11 wins will be a struggle for this team, and might even consider taking them to miss the playoffs at +108.

Pound-for-pound, Kyler Murray has been one of the more dynamic quarterbacks since he entered the league in 2019. The 24-year-old showed very early in his rookie season his dual-threat success in the NCAA was going to translate well at the next level. In 2019, Murray ran for 544 yards on 93 attempts, and his numbers soared to new heights last season as well. In 16 starts, the QB ran 133 times, logging 819 yards and averaging 6.2 yards per carry. However, as is the case with most young quarterbacks willing to escape the pocket, Murray took some big shots last year and it led to a shoulder injury that nagged him for the better part of the second half of the season. With Murray being the most important player on this team, I expect Arizona to protect him at all costs this season. The addition of running back James Conner should help limit the amount of QB-designed runs called. When Cam Newton entered the league in 2011, he used his legs a lot as well. In 2011, he logged 126 rushing attempts and had 127 the year after. In his third year, that number dropped to 111 and he posted his lowest rushing total (585) to that point of his career. The same happened with Lamar Jackson. He ran for 695 yards on 147 carries in seven starts during his rookie season, 1,206 yards on 176 attempts his second season and posted a career-low (but still remarkably high) 1,005 yards on 159 attempts last season. This league has a way of beating players up. With Murray now ready to enter his third season, I wouldn’t be shocked to see his season rushing total fall short of the number for the first time in his career.