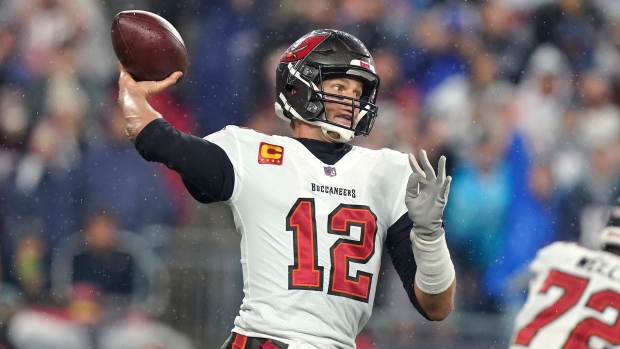 This week, Tom Brady and the Tampa Bay Buccaneers are seven-point favourites as they travel to Philadelphia to take on the Eagles.

Brady enters Thursday night on the heels of passing for five touchdowns against the Miami Dolphins, but is also nursing a right thumb injury after hitting a helmet on a follow through during the second quarter in Week 5.

Meanwhile, the Eagles picked up a big come-from-behind win on Sunday, taking down the Carolina Panthers 21-18 to improve their record to 2-3.

The defending Super Bowl champs have picked up right where they left off, entering Week 6 with a 4-1 record and boasting one of the top offences in the league.

Brady’s 15 touchdown passes trail only Patrick Mahomes and have him two clear of Dak Prescott and Justin Herbert as he continues his high level of dominance at the age of 43.

At the skill positions, Tampa’s three-headed monster of Mike Evans, Chris Godwin and Antonio Brown have not disappointed this season.

All three players enter this game with at least 20 catches and 325 yards, while the three have combined for nine of Brady’s 15 touchdowns, with Evans (4) leading the way.

But it is Leonard Fournette who enters the game at -120 with the shortest odds of any player Thursday night to score a touchdown.

The running back has 56 of the team’s 103 carries this season, but has found the endzone just once. He enters the game with an over / under of 62.5 rushing yards and 13.5 rush attempts.

On defence, one of the best units in the league last season has given up their fair share of points so far this season.

After five games, their 122 points against have the Bucs ranked 19th in the league, and their 1,572 passing yards given up ranks dead last.

But Tampa Bay’s defence has virtually shut down the run all season, ranking first with just 229 yards allowed.

They have also done a terrific job forcing turnovers. The Bucs have created eight turnovers this season and take on 23-year-old Jalen Hurts who has committed 14 turnovers in his 20 NFL games.

The Philadelphia Eagles… Where do we start?

After a big Week 1 win over the Atlanta Falcons, the Eagles quickly began a downward spiral that included dropping three straight games and being outscored by a combined 38 points in those losses.

And yet on Sunday they rallied back from a 12-point deficit to hand the Carolina Panthers their second loss of the season in a game that saw Hurts rush for two touchdowns.

One thing that has really stood out about this Eagles team to start the season has been how much they have leaned on Hurts throwing the ball, and how little they have used their running backs.

Hurts enters Thursday night with an over / under of 38.5 passing attempts, while Sanders’ rushing attempts number is set at 9.5.

Hurts has also been using his legs a lot this season and trails Sanders’ 48 rushing attempts by just five carries.

With Tampa Bay’s strength on defence being stopping the run game, and their ability to put up a lot of points, I believe we’ll see Hurts throw a lot on Thursday.

Tampa Bay opened as a seven-point favourite and the line still sits at that number, with the total up one point after opening at 51.5.

Both teams are 2-3 against the spread this season, with the over hitting in four of Tampa’s games and just two of Philadelphia's.

With Tom Brady at quarterback, the Buccaneers are 4-4 ATS as road favourites and have failed to cover in both road games this season.

Meanwhile, Philadelphia is 0-2 at home this season ATS.