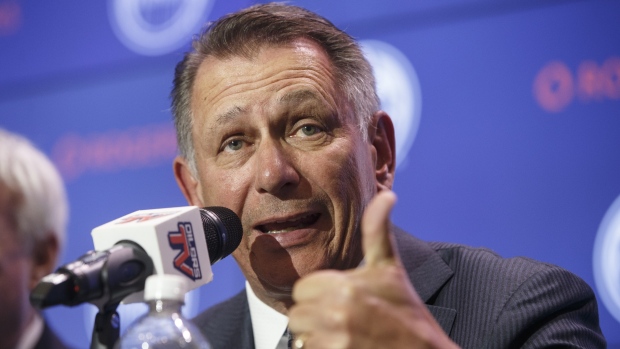 With the 2020 NHL Draft looming, TSN Hockey provides a draft primer for each of the seven Canadian NHL clubs. Today, we continue with the Edmonton Oilers.

2019 REVIEW
No. 8 overall pick Philip Broberg has the makings of a puck transporter par excellence, playing his way into a bubble exhibition game this summer after a season in the Swedish Hockey League. Broberg had one goal and two assists in his 2020-21 SHL debut on Sept. 19. Quebec League star Raphael Lavoie scored 38 goals in 2019-20 – including 20 in 25 games after a trade from Halifax to Chicoutimi. Overall, Lavoie had 82 points in 55 games, averaging 1.49 points per game.

GRADING THE LAST 5 DRAFTS
Edmonton drafted player for the ages Connor McDavid and three future NHL defencemen in 2015 to earn an A-plus from TSN Director of Scouting Craig Button. Ethan Bear and Caleb Jones were Oilers this season and John Marino, traded to the Penguins in 2019 after indicating he wouldn’t sign with Edmonton, made an impactful debut with Pittsburgh. Marino placed fourth in rookie defenceman scoring (26 points in 56 games), Bear finished fifth (21 in 71 games) and Jones ranked 15th (nine in 43 games). The pickings have been slimmer since then, but Kailer Yamamoto flashed great potential in 2020 and the organization awaits the arrivals of Evan Bouchard and Broberg. 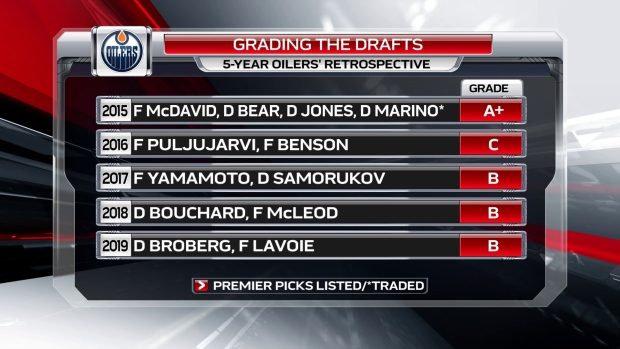 OILERS' PATTERN
Edmonton has picked at least one goalie in each of the past six drafts, tying the Oilers with Carolina & Detroit for the longest such current streak. No other team has come close to the Oilers in making as big an investment in the crease over the past three seasons: one second round pick (Olivier Rodrigue) and two thirds (Stuart Skinner and Ilya Konovalov). The bottom line, though, is that the Oilers still don’t have an authentic blue-chip goalie, either in the NHL or in the system. 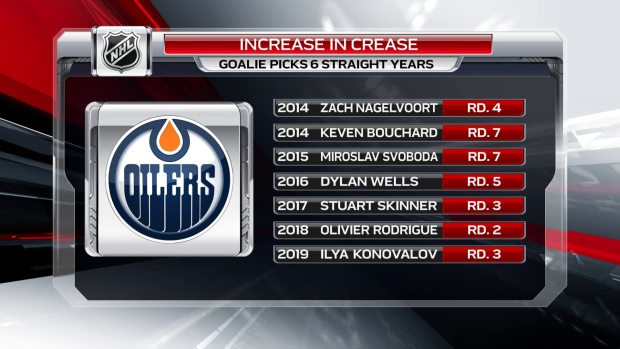 OILERS' TOP 10 PROSPECTS: GRADE B-MINUS
Broberg and Bouchard project as No. 2-3 blueliners and Lavoie could eventually be the top-six winger the Oilers so desperately need. Not listed is 22-year-old Jesse Puljujarvi, the No. 4 overall pick in 2016, who had 24 goals and 53 points in 56 games with Karpat in the Finnish Liiga. Puljujarvi has requested a trade from the Oilers. 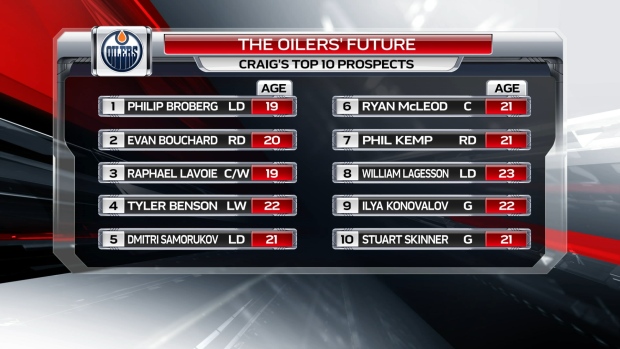 2020 LOOKAHEAD
The Oilers are guaranteed to have only one pick – No. 14 – in first four rounds Oct. 6-7, but it stands to reason they will also have a third rounder by deferring payment on the Milan Lucic – James Neal trade until 2021. Any which way you look at it, the Oilers currently have just a combined three selections in the first three rounds this year and next.

OILERS' DRAFT POLL
TSN Director of Scouting Craig Button identifies scoring wingers and goaltending as Edmonton’s greatest needs. We ask: Which winger from this group of four players projected to be available would you select for Edmonton at No. 14?

CRAIG'S CHOICE:
Quinn went from 12 goals in his rookie season with the Ottawa 67’s to 52 in 2019-20. Button labels Quinn the best goal-scorer in the draft. But if highly touted Yaroslav Askarov were somehow to fall to No. 14, Button would choose the Russian goalie.