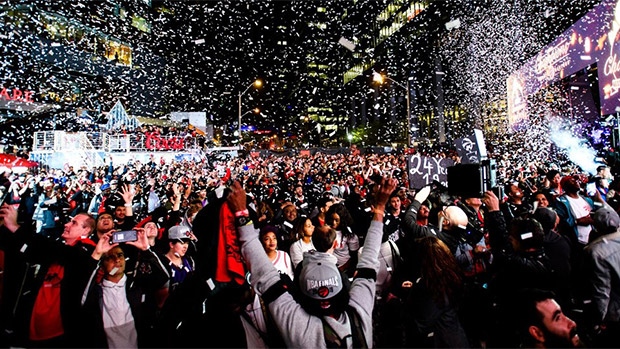 TORONTO – After 24 long years, the Toronto Raptors are the 2019 NBA Champions following their Game 6 victory over the Golden State Warriors on TSN and CTV on Thursday, June 13, and to the victors go the spoils. TSN and CTV are pleased to carry complete coverage of THE RAPTORS CHAMPIONSHIP PARADE, airing in a national live simulcast today at 10 a.m. ET on TSN, CTV, CP24 and CTV News Channel, with special coverage starting on TSN at 9 a.m. ET.

TSN and TSN Direct subscribers can live stream all of the festivities on TSN.ca/Live and the TSN app. Coverage of the parade will also be streamed live on CTV.ca, CP24.com CTVNews.ca, and simulcast on CTV News Channel and CP24 beginning at 10 a.m. ET. TSN, CTV and CP24’s digital properties will be on-site, capturing behind-the-scenes moments from the raucous streets of Toronto.

Parade coverage will be hosted by the all-star team of TSN’s James Duthie and CTV News Chief Anchor Lisa LaFlamme, reuniting the duo who worked together at the Vancouver 2010 Olympic Winter Games.

The parade begins at the Princes’ Gates at the CNE at 10 a.m. ET, rocking its way through the streets of Toronto, where it will conclude at a rally at Nathan Phillips Square beginning at approximately 12 noon ET, where fans will hear from the newly crowned NBA champions.